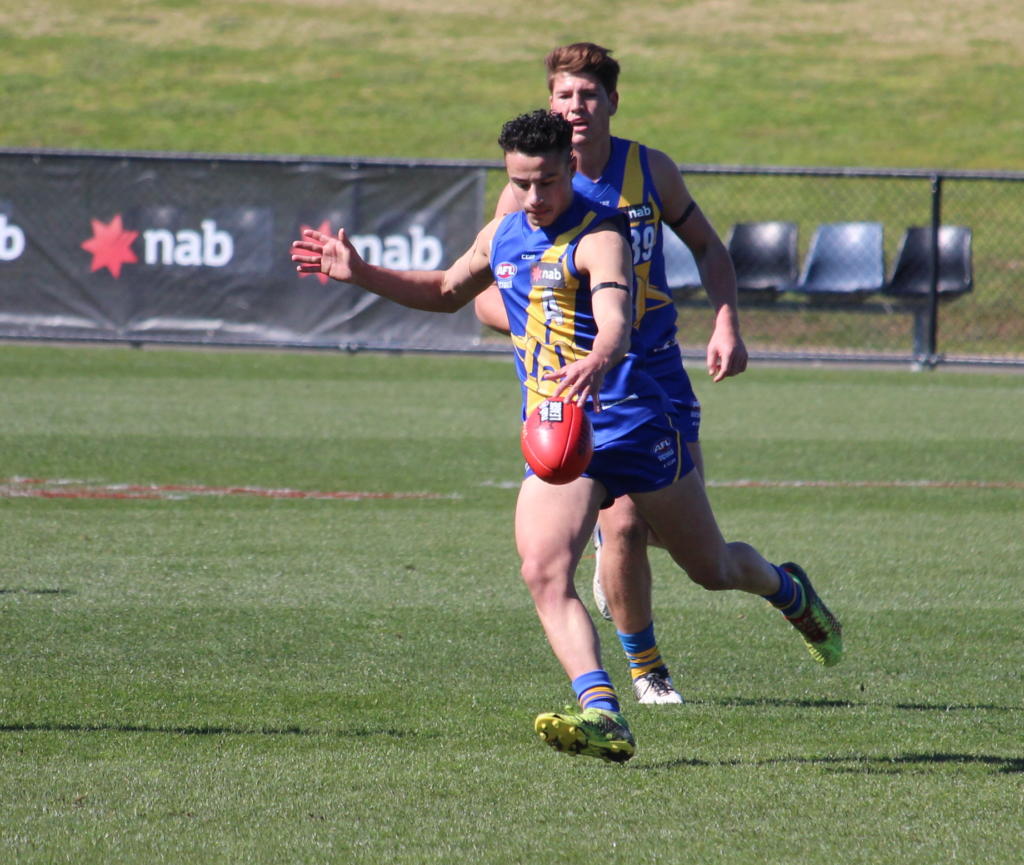 IF you are missing footy like we are, then let us somewhat salvage that with a look back in a new series of Classic Contests. In today’s contest we look at one of the would-have-been Round 3 clashes in the NAB League this year between Northern Knights and Western Jets. In this edition, we wind back the clock to 2019 when the sides faced off in the do-or-die elimination final at a blustery MARS Stadium.

Coming into the do-or-die final, both sides were following on from wins in Wildcard Round as the Knights had accounted for Bendigo Pioneers fairly comfortably at home, while the Jets were too strong for Greater Western Victoria (GWV) Rebels. We relive the match report from the game:

WESTERN Jets have come back from conceding the first six goals of the game to run over the top of a wounded but brave Northern Knights side by eight points in a thrilling wind-affected game at Mars Stadium, Ballarat. The Jets took control after quarter time, jumped by the breeze in favour of the Knights, before settling in and reducing the scoring output of their opponent in the second half to just get home, 12.5 (77) to 11.3 (69). The spearheads were in fine form with competition leading goalkicker Archi Manton booting four goals in the win, while Josh D’Intinosante booted five majors. Full credit to the Jets side who negotiated the breeze better, as the tiring Knights were without Adam Carafa later in the game, suited up on the boundary line, while both Jackson Davies and Ryan Sturgess picked up knocks in the second half.

Northern Knights took advantage of a huge breeze blowing towards the scoreboard end to pile on six goals to zero and open up a 36-point lead at quarter time. Nikolas Cox was simply too tall for his opponent, booting two first quarter majors including the first of the game from a well positioned Davies kick. He then made it two with the Knights fourth from the square. In between the Knights produced goals from Jack Boyd who won a free kick in the goal square, and the very next clearance Jackson Bowne added his name to the goal kickers list with a nice launch from just inside 50. Some great blocking at the forward stoppage resulted in a free pass for D’Intinosante to run onto it and kick the Knights’ fifth despite the clear frustrations of the Jets’ defence. With the clock running down, the Knights were not done just yet as Nathan Howard received a free kick and converted after the siren in what had been all one-way traffic. At quarter time, it was a Sam Philp-led midfield that had dominated its way to 16 inside 50s to five and took complete advantage of the five to six goal breeze. Eddie Ford provided a rare highlight for the Jets in that opening term with a high-flying mark, while Jets’ captain Lucas Rocci stood up best he could in an under-siege defence.

It was all Western in the second quarter as Emerson Jeka got into the game with two majors, and the seventh placed side piled on six goals to zero themselves to draw level with 90 seconds remaining. Nash Reynolds was the first to capitalise in front of goal, taking full advantage of an opponent slipping over and kicking truly from just inside 50. The next was a great mark to Jeka who converted from 25m out straight in front. Philp tried his best to get something happening from the middle with a terrific burst away clearance and bomb forward to Cox, but he could not quite direct the bouncing shot on goal through the big sticks. Later in the term Cox was switched into defence on Jeka after Sturgess came off a bit sore. Meanwhile the Jets kept piling on goals as Manton got out the back one-on-one and kicked a goal midair in the goal square, while Mace Cousins did the same cleanly grabbing it 10m out as the deepest player and putting it through. Then Josh Honey joined the party with a great sliding mark outside 50 and a long shot which carried in the wind and sailed through, before Jeka levelled the scores after backing back against his opponent, holding position and while he did not bring it down, kept his feet and booted it off the deck. So after 50 minutes, the teams were as they started, level on points with a half to come.

The Western Jets put on a big show in the third term, booting three goals against the breeze to restrict the Knights’ lead to just five points by the final break. Despite D’Intinosante’s best efforts for Northern – the exciting and dangerous small forward booted three goals in the term – it was the Jets who managed to add majors down an end that was basically impossible to score down in the first half. They all came from traditional football entries in challenging conditions, with Lucas Failli running onto a loose ball, Manton showing off his strength one-on-one to keep his balance and kick his second, and Aaron Clarke winning a free kick from a tackle and converting the set shot. In between, D’Intinosante wrecked havoc with his three majors, booting one off a great kick inside 50 from Sturgess, then winning a free kick from a contest with Rocci sliding low and converting the set shot, and finally capitalising with a third from a spoiled mark to boot a low bullet through the middle. Bowne was the other one to kick his second goal of the term with a great kick from inside 50 earlier in the term, but it was the Jets who controlled play and just made the most of the rare chances going forward to be in the box seat heading into the final term.

When Davies came off worse for wear early in the final term from a high tackle it was not a great start for the Knights, especially when a third goal from Manton off a step put the Jets in front for the first time during the day. D’Intinosante pushed into the midfield but still found space forward, though his set shot from 50m went well out on the full. Sturgess limped off the ground midway through the term as neither side could make inroads into their scoring, before Manton all but put it beyond doubt with his fourth after an errant high tackle and subsequent set shot goal. Just when the game looked over, the Knights went end-to-end and it was D’Intinosante who put his hand up once again with a ripping goal from 50m to sail it home and cut the deficit to just one point. When Reynolds got on the end of a bomb inside 50 and it escaped the foot race of Jeka and Davies to bounce though, the margin was seven with 30 seconds on the scoreboard clock. But the benches called out two minutes and both sides knew there was still time. While the Knights had a last roll of the dice, it was Western that held firm to book its spot in the semi-finals.

In a low possession game, Daly Andrews lead the way for Western with 19 touches, six tackles and three inside 50s, while Failli (14 disposals, six inside 50s and a goal), Rocci (14 disposals, five rebounds) and Will Kennedy (14 disposals,, seven tackles and 24 hitouts) were the other major ball winners for the Jets, as Manton’s 4.2 came from 10 touches and two marks. For Northern, D’Intinosante was superb with five majors from 13 touches, two marks and three tackles, while Philp (19 touches, four inside 50s, six tackles) and Davies (23 disposals, five marks and six rebounds) were the busiest in the loss. Boyd also persevered in the ruck with 22 touches, 12 hitouts, four inside 50s, two rebounds and a goal.

As history would have it, Western went on to the semi-finals, only to go down to a strong Gippsland Power outfit, in what would be the last competitive game played, while for the Knights, this elimination final loss is the most recent contest.