THE Northern Territory Football League (NTFL) Men’s Premier League top five is becoming clear after 10 rounds, with most teams looking settled heading into the mid-season break. Nightcliff stamped its authority as the competition’s best with a big win over its nearest rival, Tiwi managed a meaningful win at home, St Mary’s jumped into second, and Waratah got up in a bottom three clash.

Tiwi earned some breathing space in the NTFL top five with a hard-earned win over Darwin at home, putting the Bombers six points clear of the bottom three. The home side’s transition running proved too much throughout, powering it to a 15.15 (105) to 13.13 (91) result.

The Bombers managed to stay just enough ahead at every break, opening up a 10-point gap in the first term and building on it with each passing stanza. A late surge from the Buffs proved too little, too late, with Tiwi holding on under pressure and Darwin left to rue some missed opportunities. An impressive six players booted two goals each for Tiwi, but it was Alastair Darcy, Ashton Hams, and Rodney Baird who were named best for their efforts further afield. Bomber Michael Kantilla was also recognised with a rising star nomination. For Darwin, key forward Daniel Stafford did most of the damage with six goals, with fellow bigman Darren Shillabeer managing two but both spurning some good chances. Christopher Williams was his usual self, while Aidan McAdam was lively up forward.

Heading into a crucial clash with St Mary’s, the Buffs will be without Shillabeer after he was offered a two-match ban for umpire abuse, while Donga Maymuru sustained a horror knee injury and is set for a long spell on the sidelines. With no such concerns, Tiwi will look to further cement its spot in the top five next when when it does battle with Wanderers at Tiwi Oval.

St Mary’s pounced back into second spot with a comfortable 51-point win over the lowly Palmerston Magpies, keeping touch with Nightcliff in the process. The Saints were far too good in the 17.14 (116) to 10.5 (65) win, posing a host of attacking threats and maintaining a dour defence when it mattered.

After a competitive start, St Mary’s broke away in the second term with five goals to one, building a base for its winning margin and setting the tone for the rest of the game. Another one-sided term put the result all but beyond doubt, with Palmerston lacking answers to the scoreboard pressure. Dylan Johnstone and Jackson Calder shared almost half of the Saints’ goals with four apiece, backing up from big hauls last week. Shannon Rioli was also among the goals (three), but it was Jackson Geary and Ryan Smith who again went one and two in the best ahead of David Armitage. Broderick Church was the answer up forward for Palmerston as he notched three majors, leading a pack of eight individual goalkickers. Adam Diamond continued his good form to be named the Magpies’ best, with Jack Berry also featuring once again.

The Magpies’ search for a maiden win will not get any easier before the new year with Nightcliff next in their sights, making for a scary proposition. On the other hand, the Saints play off against a fellow finals-bound side next time out in the form of Darwin, just as the race for second hots up.

Nightcliff put its foot down as the team to beat, trumping Southern Districts by 38 points in a top of the table clash. The Tigers were ultra-impressive going both ways, sealing the 14.9 (93) to 8.7 (55) result in style to go eight points clear on top.

A stalemate first term and close second stanza saw the Crocs remain within striking distance at two goals adrift as Nightcliff’s defence held strong, but a five-goal to one third term broke the game open for the winners. It was elementary to finish off, with Southern Districts unable to chew into the lead far enough as the Tigers remained on the pulse. Nine individual goal kickers were led by Michael Hagan‘s bag of three for Nightcliff, teaming well with the likes of Liam Holt-Fitz. Cam Ilett also troubled the scorers and was named best afield, with ex-Williamstown forward Leigh Masters also among the action. Will Farrer produced a couple of highlights on his way to nabbing three goals for Southern Districts, with fellow goalkickers Rory O’Brien, Josiah Farrer and Beau Schwarze also influential.

With the result putting them in third, the Crocs will look to bounce back against Waratah next time out, but may have their work cut out for them with the Warriors coming off an impressive win despite their bottom three status. Meanwhile, Nightcliff will look to finish its year on a high when it faces bottom side, Palmerston on Sunday night.

Waratah kept its thin finals hopes alive with a win over fellow bottom three side, Wanderers to the tune of 32 points. The Warriors answered each Muk Muks charge, coming out comfortable 14.14 (98) to 9.12 (66) winners in the end.

In a game with heavy momentum swings, Wanderers hit back after a goalless opening term to head into the main break just three points behind. But another big quarter from Waratah, with eight goals to two, put it 40 points to the good with time running out for the Muk Muks. It proved a bridge too far, with a spread of nine goalkickers helping Waratah boot the winning score. Abe Ankers led the way once again with four majors, while dangerous smalls Kim Kantilla and Henry Kerinaiua also found the big sticks. It was less of an even spread for the Eagles, with three goals apiece from Warwick Williams and Stanley Tipiloura very useful nonetheless. Braedon McLean was again influential, but the very young Eagles side just could not perform consistently enough over the four quarters.

Drawing within two points of Wanderers with the win, Waratah next faces Southern Districts in a tough assignment, while the Eagles have the equally tough task of taking on Tiwi as they look to steady their season and break back into the top five. 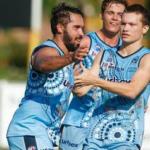