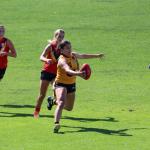 WHEN your first draft-eligible year rolls around and you are in the State Academy, the AFL Women’s Championships are the pinnacle of state representation. For Claremont’s Emily Bennett, last year – her second in the Academy – was meant to be the year where she tested herself against the best in the country and put her best foot forward.

Instead, like most of the country, travel was restricted, seasons were cut short, and the championships completely abandoned due to the COVID-19 pandemic. Fast forward 12 months, and Bennett has finally got to represent her state, running out in each of the three games for Western Australia at the championships.

“It (2020) was definitely difficult because it was my second year of state was last year and I was so keen to just smash it out and it was like a year I was hoping for because I could have been drafted last year as well,” Bennett said. “It was pretty tough, because fitness had dropped off because I didn’t have many people to train with so I’m glad it’s happening this year, but it was definitely hard.”

Bennett cited fitness as an ongoing improvement she could make to her game, to be able to “last the full game”, whilst her ability to clunk grabs and run off half-back – be it through or around people – as some of her impressive traits.

“I would say my main strength would be my clean hands, so being sure I’m still able to get some clean marks and under foot I’d say it’s definitely one of my strengths, going through people,” Bennett said.

The talented teenager was like many other sports-mad people growing up, testing herself at a variety of sports before focusing on Aussie rules where she progressed from local football to her WAFL Women’s club.

“I started footy when I was in Year 7 so high school,” Bennett said. “It was just a fun carnival and I was playing netball, basketball and I did a little bit of athletics at the time. “I just thought I’d give it a go, loved it, so I started at my community club and then got invited to go to West Perth, one of the WAFL clubs and have been recently playing for Claremont for League.”

Bennett said while the step up to League might have been daunting, the fact she had entered the State Academy prior to playing a game made the transition all the more easier for her to adapt and feel like she belonged at the level before stepping on-field.

“I was quite a fresh player only having four years behind me,” she said. “It was pretty nerve wracking, but getting in the State Academy before League, I felt really ready and it was such a great experience.”

Being able to not only train with the State Academy, but to travel to South Australia and Victoria with them to finally get a taste of the national carnival, Bennett said she enjoyed every minute of it, and was as much about having fun with like-minded people as it was about developing to be the best possible player.

“I would say all the time it’s such a fun place, people to play with, being able to play with people you can trust because they’re just all so elite and they’re all such nice girls,” she said. “It’s definitely what I look forward to and come back each year and do the same.”

As for her inspirations, Bennett said she had to thank her parents for enabling her to achieve what she had so far, and if she can make it to the top level, it would be as pleasing to somewhat repay the faith as it would be exciting for Bennett herself.

“Mum and dad, I would just love to show them what I got,” she said. “I want to prove to them, they’ve always been there for me in any sport I’ve ever done. “They’re definitely people who inspire me.”

As for her goals in football, naturally AFL Women’s is the ultimate goal for the tough defender, but if her career remains at WAFL Women’s level, then Bennett will still have the one goal within her control – becoming the best footballer she can.