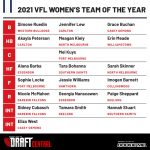 AS the Victorian Football League (VFL) Women’s competition prepares to restart after the Easter Weekend break, Draft Central, in conjunction with Women’s Australian Football Radio (WARF) has compiled a Team of the Year to date in Round 6. It is an even spread across the board with eight of the 12 competing teams recording two players, and the remaining three sides having the one representative in a realistic, 16-starter and four-bench side.

Ladder leaders Port Melbourne have two players in the side, with ex-Murray Bushrangers talent Sophie Locke named in the forward pocket, and experienced former AFL Women’s player in Mel Kuys in the centre. The other undefeated side in Collingwood just has the one player in there, with forward Imogen Barnett making the team after booting eight goals in the first five games, one less than leader Locke. In between the pair of forwards is Hawthorn’s Jessie Williams who straightens the team up at full-forward, the sole Hawk in the team.

At half-forward, ex-Cannon Alana Barba earned a place in the side with the inside midfielder booting a goal a game in her first five games to book a starting spot on the flank. She was named in the side with fellow midfielder Georgia Nanscawen with the ex-Roo named ruck rover. The other onballer in the side is ex-Geelong Falcon Paige Sheppard, with the rover’s teammate Tamara Smith – another ex-Bushranger – named on the bench. In the ruck is Western Bulldogs’ Nicole McMahon who has been superb all season, whilst teammate Simone Ruedin has been a rock in defence.

Holding up the fort at full-back is Carlton’s Jennifer Lew, who is in the back six with another Blue in Akayla Peterson, who has spent time at both ends, also kicking three goals this season. Ex-Magpie Grace Buchan is in the back pocket but instead for Casey Demons this season, whilst teammate Eliza West is on the interchange. At half-back, Williamstown’s Erin Meade will provide some run for the hypothetical team, whilst centre half-back Meagan Kiely rounds out the defence. The North Melbourne tall is in the side with talented Tasmanian goalkicker Sarah Skinner, with the reigning TSL Women’s league best and fairest winner making an impact at VFL Women’s level.

The last remaining starting player is centre half-forward Tara Bohanna with the Southern Saint able to chop out in the ruck when forward. She should not need to though, with Darebin Falcons’ sole representative in Sidney Cubasch to provide that rotation with McMahon, whilst Bohanna’s Saints’ teammate Hannah Stuart rounds out the interchange. In terms of emergencies and those unluckiest to miss out, it is a trio of defensive players in Southern Saints’ Rebecca Neaves, North Melbourne’s Molly Eastman and Darebin Falcons’ Gena Lawson-Tavan.

DRAFT CENTRAL’S VFL WOMEN’S TEAM OF THE YEAR: ROUND 6