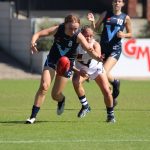 AVALON Airport Oval and Trevor Barker Oval will play host to the 2021 AFL Women’s Under 19 Championships next week, after the two grounds were picked as the venues for the rescheduled championships.

After having a couple of lead-up matches with South Australia accounting for Western Australia by a goal in a thriller, and Vic Country too good for Vic Metro, the teams all prepare for their next challenges. Originally scheduled to be held at Metricon Stadium on the Gold Coast, the COVID-19 scare last week meant the AFL had to reschedule to ensure the championships were not under a cloud after missing entirely due to the same pandemic last year.

Instead it will take a different look in 2021 with Queensland not attending the first leg of the championships, and will instead play the Victorian sides in May. Starting on Monday, South Australia will take on Vic Country, and Western Australia will face the Allies, at Avalon Airport Oval in Werribee. Those games will kick off from 10am and 12.30pm respectively. The Woomeras and Medleys are also anticipated to clash throughout the championships in a show of the terrific Indigenous and international talent running around in the junior pathways.

Next Thursday, April 15, Vic Metro enters the fray again and will take on Western Australia from 10am, with the Allies and South Australia locking horns from 12.15. Both games will be played at Sandringham’s Trevor Barker Oval, where Country defeated Metro last week. The Vic Country and Queensland match on May 23, and the Queensland and Vic Metro match on May 29, are yet to have formalised venues.