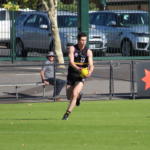 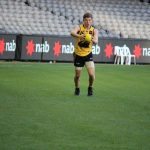 WEST Australian football hit the big-time this week as West Coast and Sydney clashed in front of a record crowd in the final game of the AFL’s opening round. The Western Australian Football League (WAFL) season is also set to get underway, as preseason fixtures concluded this weekend.

The attendance also re-wrote the Eagles’ highest ever home crowd, smashing the previous record of 44,142 people who attended the 1991 qualifying final at Subiaco. Although the venue has already held a cricket One Day International between Australia and England, an AFLW clash, and more recently an Ed Sheeran concert, Sunday’s match provided WA footy fans with the first opportunity to watch AFL football at the 1.6-billion dollar facility. The 60,000 seat stadium is currently the third largest seated venue in Australia, sitting only behind the MCG and ANZ Stadium.

While the night was a historic occasion for WA football, the mood was dampened from a West Coast point of view by the Swans, who proved too strong for a brave Eagles side, recording the first win at Optus Stadium with a 29-point victory.

The final round of the WAFL preseason has come and gone, as clubs turn their attention to round one of the regular season.

In the battle of the AFL-aligned sides, Peel Thunder dominated East Perth winning 20.9 (129) to 3.7 (25). Forward Hugh Dixon had an outstanding night for the Thunder, finishing with six goals from 18 possessions, while Tom Sheridan did his chances of an AFL recall with Fremantle no harm, recording 25 possessions. Ex-Subiaco product Brayden Ainsworth was the Royals leading possession getter with 26 disposals.