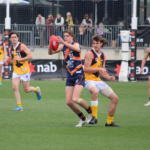 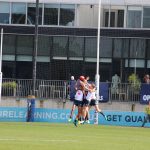 THIS week in Tasmanian football has seen the AFL Chief Executive Officer (CEO) visit the Apple Isle to address the current state of Tasmanian football while a number of Tasmanian AFL players have been named for the first round of the AFL season. Meanwhile Tarryn Thomas will have a chance to play for North Melbourne’s VFL side this season which starts next month.

With just two days before the beginning of the 2018 AFL Premiership Season, AFL CEO Gillion McLachlan has visited Tasmania to address the state’s ongoing football issues.

McLachlan arrived in Hobart on Wednesday morning to meet with AFL Tasmania CEO Trisha Squires along with state Premier Will Hodgman and outlined the future direction for Tasmanian football in a press conference at North Hobart Oval.

McLachlan admitted that there were still challenges facing the TSL and said splitting the state league into conferences was not out of the question.

Tasmanians in the AFL | Round One:

A number of Tasmania’s AFL-listed players are looking to start their seasons with a victory this weekend while four players featured in last night’s season opener.

In the opening game of the 2018 AFL Premiership Season, Richmond started their premiership defense with a hard-fought 26-point victory over an impressive Carlton outfit.

Premiership Tasmanian’s Jack Riewoldt and Toby Nankervis where both impressive for the reigning premiers with Riewoldt finishing with four majors, while Nankervis won the hit-out battle with Matthew Kreuzer 33-23.

Carlton’s Tasmanian duo of Liam Jones and Levi Casboult stood at each end of the ground with Jones playing the majority of the night on fellow Tasmanian, Riewoldt.

Jones, well-known for his ability to intercept and read the play, finished with a combined 16 one-per centers and intercept possessions.

Casboult was relativity well held by the game’s best defender in Alex Rance, with the marking forward held to just the one goal and four marks.

While last year was a breakout for basketballer-turned-Crow Hugh Greenwood, the big-bodied midfielder has only been named as an emergency for tonight’s contest as he battles to return to full fitness following achilles surgery in November.

Fellow Tasmanians Tom Bellchambers and Josh Green have both been named in a new look Essendon line-up following the retirements of Jobe Watson and James Kelly and the inclusions of Devon Smith, Jake Stringer and Adam Saad.

Former Lauderdale and Glenorchy players Mitch Robinson and Jimmy Webster will again be opponents on Saturday when they face off in Melbourne.

Robinson returns after an injury-riddled 2016 campaign while Webster has been named off half-back and will look to use his elite foot-skills to provide the Saints with run from the back-50.

After growing up in the chills of Tasmania, three homegrown talents will sweat it out in Cairns when Gold Coast host North Melbourne at Cazaly Stadium.

North’s tall timber Ben Brown will again be the main focus in attack for a rebuilding Roos while Kade Kolodjashnij will be looking to get back to his form of 2016 when he lines up with fellow Tasmanian and new Sun Lachie Weller in a new-look Gold Coast outfit in incoming coach Stuart Dew’s first game.

Former Dodges Ferry and Hobart high-flyer Jeremy Howe will be the lone Tasmanian on the MCG on Saturday night when Collingwood host Hawthorn.

Howe has been named alongside forward-turned-defender Darcy Moore at half-back.

In what shapes as one of the opening round’s most exciting games, the second-half of Tasmania’s AFL twins, Jake Kolodjashnij, will line-up for Geelong against the Dees at the MCG.

With fellow Tasmanian Cat’s Jackson Thurlow (injured) and Ryan Gardner (VFL) not named in the side’s 25-man squad, Kolodjashnij will be the lone Apple Isle product in the Geelong homecoming of superstar Gary Ablett.