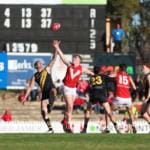 IN the first half of a split Round 16, two games were played across all three levels as South Adelaide won all three games on the road against Central District, while Glenelg claimed two out of three wins against North Adelaide, as a shock draw to the cellar dwellers forced the Tigers to split the points in the League game.

South Adelaide’s premiership hopes remain alive after downing Central District by five goals at X Convenience Oval in a dominant performance. The Panthers had 24 scoring shots to 14 in the win, booting eight goals to one in the first half to set up the victory. Joel Cross had a game-high 31 disposals, nine marks, four clearances, six tackles and a goal for the winners, while Nicholas Liddle (27 disposals, four marks, five clearances, four tackles and a goal) and Malcolm Karpany (22 disposals, four marks, 10 clearances and seven tackles) were others who had plenty of say on the proceedings. For Central, Corey Durdin continued to have an impact defensively with five tackles from seven disposals and three marks, while Travis Schiller (29 disposals, six marks, six clearances, eight tackles and a goal) and Jarrod Schiller (25 disposals, three marks, six clearances and four tackles) were among the best once again.

In a display of inaccuracy, Glenelg has survived what was almost a disaster for the top side, managing to grab a draw with potential wooden spooners North Adelaide in a low-scoring match. The game yielded eight goals from 38 scoring shots in challenging conditions, as a remarkable 18 players registered at least one behind on the day. Glenelg’s Luke Partington was the best again with 28 touches, three marks, three clearances, six tackles and a goal, while Jonty Scharenberg (25 disposals, eight marks and three clearances) and Matthew Snook (25 disposals, five clearances and three tackles) found plenty of the ball. South Australian Under-18 captain Will Gould was solid once again with 16 disposals, six marks and four tackles. For North, Thomas Schwarz registered 29 disposals, eight clearances and seven tackles to tag-team with Aidan Tropiano (21 disposals, three marks, eight clearances and four tackles) in the middle, while Jarred Allmond had 27 disposals, five marks and three tackles.

South Adelaide showed no mercy against Central District, piling on eight goals to one in the second half to run away from the bottom side in an 84-point rout. Key forward Daniel Sladojevic had another day out slotting six goals from nine scoring shots, as well as 19 disposals, nine marks and five tackles. Nicholas Kraemer had 31 disposals, four marks, eight clearances, five tackles and one goal, while Liam Hamilton finished with four goals from six scoring shots, 14 disposals and eight marks. Tyrone Milera (20 disposals, six clearances and a goal) and Lowan Welch (18 disposals, seven clearances) were productive in the middle for Central District, while Shay Linke laid six tackles from 17 disposals and six marks.

Glenelg moved to within percentage outside the top four with a huge 46-point win over fourth placed North Adelaide. Reid Kuller had a day out with 33 disposals, 11 marks, 11 tackles and five clearances for the Tigers, while Kye Dean (38 disposals, 10 clearances, five tackles and two marks) had the ball on a string. For the Roosters, South Australian Under-18 state players Josh Hart (33 hitouts and eight tackles from seven disposals) and Harrison Magor (12 tackles, four clearances and a goal from nine disposals) applied the defensive pressure, whilst key utility Dyson Hilder had 24 disposals, 10 marks, eight tackles, two clearances, two rebounds and 1.2 in the loss. 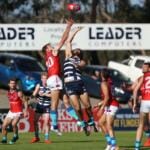 IT is now getting into the busy time of the season for top-end Under 18 talent, with the final South Australian (SA) trial game held before the Under 18s National Championships defence begins for the SA squad. A week off School/College footy allowed all youngsters back to their SANFL clubs. The SA Under 18 squad has been quietly going about its selection and no doubt the final trial hitout. Jamie Morgan, Damon Mattiazzo and Tom Wyman cast their eye across the South Australian National Football League (SANFL) competition, focusing on some of the talented state squad members.

In one of the last hitouts before the first game of the National Championships, the SA Under-18 squad played against a mixed SA Under 20 squad of players from SANFL clubs. While conditions for the game were not great, it was a solid hitout for the SA Under-18 side, with a good opportunity to settle the side into some positions and also help to finalise selection. Sturt big man, Lachlan Burrows was awarded best on ground for the SA Under 18 side, but other midfielders Dylan Stephens and Jackson Mead continued their good form so far winning plenty of ball around the contests. Forward Cameron Taheny finished with two goals along with Eagle Jamie Coff, while Kysaiah Pickett also hit the scoreboard. It will be a tight battle for positions in the final SA side with good depth again in the squad for 2019. The SA Under 18 Leadership group was also announced with clear standout Will Gould selected as captain. The other leaders are Dylan Stephens, Jackson Mead, Dyson Hilder and Daniel Sladojevic.

Glenelg remains at the pinnacle of the SANFL ladder following a comprehensive 43-point triumph over North Adelaide. The Tigers, spurred on by the celebration of crowd favourite Matthew Snook‘s 100th game, put the foot down with an inspired eight goal third term, all but sealing the win. Snook, who gathered 28 disposals, alongside young on-ball duo Jonty Scharenberg (27 disposals, six marks and a goal) and Luke Partington (36 disposals, five marks, seven tackles and a goal), helped his side gain the midfield advantage. Liam McBean was dominant up forward, particularly in the air, booting five majors with Timmy Sumner, Josh Scott, Luke Reynolds and Marlon Motlop each bagging a pair. The Tigers defence, despite the absence of SA Under-18 representative Will Gould, were led well by Max Proud and Aaron Joseph. Young defender Finn Betterman was rewarded with a Powerade Breakthrough Player nomination on the back of solid run of form and a 21 disposal game. For the Roosters, former Tigers Jarred Allmond (35 disposals and eight marks) and Lewis Hender (two goals) tried hard, with the latter producing a trademark grab during the fourth term. Keenan Ramsey slotted two goals from 19 disposals but his side remains with just one win to its name approaching Round 10.

Glenelg fielded some of their stronger sides in Reserves and U18s last week and both were rewarded with good wins over the Roosters.

Norwood continued its brilliant record in close match ups so far this season holding off a fast-finishing South Adelaide side by two points at the Flinders University Stadium. The Redlegs victory was deemed even more impressive as captain Jace Bode, Magarey Medallist Mitch Grigg, and utility Ed Smart all succumbed to injuries that left them unable to finish the game. Norwood were also unable to call on South Australian Under 18 representative duo Dylan Stephens and Cameron Taheny and star player Matt Panos. A seven goal to two third quarter gave Norwood the ascendency with Lewis Johnston at the forefront with 31 disposals and two goals for the match. Cole Gerloff had a breakout game for the Legs with 25 disposals and two goals, as Dom Barry (17 disposals and two goals), Brad McKenzie (24 disposals) and Cameron Shenton (21 and two goals) were pivotal in securing the win. Young player Brodie Carroll made his League debut for the Redlegs. For South, inspiring co-captain Joel Cross was at his superb best once more with 33 disposals and four goals. Nick Liddle and Abe Davis were also impressive across the midfield and both had 30 disposals for the game. Joe Haines (24 disposals and one goal) continued his great season in defence for the Panthers, while former West Coast Eagle, Malcolm Karpany‘s efforts were left unrewarded with 22 disposals and two goals in the tough loss.

The season is now on the rise for the Eagles after securing another win in impressive style away from home. 100 gamer Jake Johansen finished with two goals and 22 disposals for the winners, and forward Jack Hayes hit the scoreboard again with another three goals along with Nick Moore who finished with two goals on his was to a Powerade Breakthrough nomination for the Eagles as well. Troy Menzel was best for Centrals with a three goal haul.
In Centrals Reserves’ big win, young talent Corey Durdin made an impressive debut finishing with two goals and 16 disposals while Nicholas Lange finished with six goals and Ryan Falkenberg with five in a dominant second half display by the Bulldogs. Young Eagle and NT prospect Ben Jungfer found a bit of the footy in his first game at Reserves level along with Zane Williams.

Adelaide survived by six points against a gallant West Adelaide side with a number of impressive performances. Bryce Gibbs returned to the SANFL and picked up 29 disposals, eight marks, seven clearances, four inside 50s, three tackles and a goal. Patrick Wilson had a game-high 38 disposals, eight marks, eight clearances, three inside 50s and four tackles. Youngster Jordon Butts continued his good form with 23 touches and 11 marks, while Andy Otten also had 23 disposals and eight marks. For West Adelaide, Kaine Stevens and Brett Turner both picked up 22 disposals.

Sturt fell short against West in the Reserves game, but young players James Borlase (son of Daryl) had a solid debut at Reserves level finishing with 15 disposals and 10 marks.