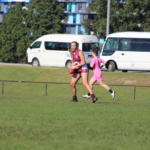 TARNI White is a player who at the age of 16-years-old was identified as one of the nation’s top talents. In 2017, she was named in the All-Australian side after a terrific carnival for Queensland. To give an indication of how rare her achievement was, Geelong Falcons and Vic Country star Lucy McEvoy was the only other player to be named in the side as a 16-year-old – and now McEvoy is a candidate for the first pick in the AFL Women’s Draft. Aside from the pair yet to be drafted, all bar three players in 22-player team have made the AFL Women’s competition.

“I’ve been playing football since I was nine years old,” White said. “I’ve played with the boys for probably for over 100 games, then I transitioned into girls football under 15s, went through the ranks to Under 17s, through to QAFLW when I was 16, and now I’m finding my way through the Queensland team.”

But if anyone thought the journey was going to be easy, then think again. With a disastrous 12-month Anterior Cruciate Ligament (ACL) injury ruling White out of the game during her bottom-age year. But, like any seasoned athlete and mature person, White was able to make the most of her year out of the game, building on her leadership.

“Going from the boys and I’ve played in the backline and I learnt really how to play it in a different way,” White said. “Boys is a different type of game to girls, I really had a really easy run through there, but now transitioning to the girls, I’ve developed the leadership just because it’s easy to go. “I’ve developed a sense of leadership, (especially since) I recently did my ACL so I made a comeback through that, and I planned on making my leadership as one of my biggest strengths and I’m definitely starting to fulfil those roles throughout the team and doing the team role.”

It was secret that White struggled during the recovery phase when all of her talented peers were hitting their strides and making serious in-roads into their future AFL Women’s careers.

“It was definitely huge rollercoaster ride,” White said. “I’d turn up to every training session and every gym session but some days were harder than others. “You’ve just got to grind through those and lean on your teammates when those darker days do come up, but yeah it was really hard but those 12 months came up really quick and I was able to get access to really good facilities from the Gabba and they helped me with my rehab.”

The injury may have been as mentally tolling as it was physically on White, but she has emerged the other side as a stronger person. After another AFL Women’s Under-18 Championships, this time in her top-age year with Queensland, White is a talent who has not been forgotten by recruiters – earning a draft combine invitation. The state representative said making the Queensland side is a difficult one with so much talent in the state and she did not take the honour lightly.

“It means everything to me,” White said. “This is a stepping stone through my journey and hopefully going into AFLW one day is my biggest dream. “To pull on a Queensland jersey, it really means everything to me. “I know some girls who missed out on these competitions and it’s really hard on them, so to do them proud really makes me happy.”

White is versatile after playing as a midfielder back in her All-Australian year, but transitioning into defence this year to ease her back into the game as she builds her match fitness with time. The tenacious, driven utility uses her determination on the field as much as off.

“Probably my (strengths are my) aggression on the ball, my tackling pressure, I’ve played on the half-back role and I’ve learnt just to shut down really quickly and keep my opponent out and do my role for the team that way,” White said.

As for her improvements, it is no surprise she just wants to get back to her peak fitness.

“Definitely my game fitness (is an improvement) really,” she said. “Just coming back from an ACL. “Everything’s still relatively new, but coming back now I need to work on this, and jump through all these hoops. “Definitely all these games help with fitness.”

White thanked her mum for her support over the years who she described as her “backbone” helping her through everything. On-the-field, it is a Brisbane Lions talent who she mirrors some of her traits on.

“Emily Bates from the Brisbane Lions (is a role model),” White said. “She’s someone who is a go-getter and goes really hard at the footy and really tackles hard.”