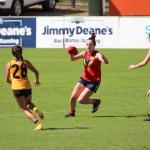 A MIDFIELD transition has made Norwood’s Jade Halfpenny get “fitter” and work “faster” in 2021. The versatile prospect had previously cut her teeth as a forward, but at 175cm, staked her claim as a tall on-baller in the Redlegs’ most recent SANFL Women’s campaign.

“It’s definitely a lot faster,” Halfpenny said. “I’ve had to get a lot fitter, that’s what preseason was for obviously. “But it’s been really good because I feel like I’ve been able to show a different side of myself and work a bit harder in games.

As a top-ager who was overlooked at last year’s draft, the move has allowed Halfpenny to showcase improvement and added strings to her bow. While her strengths have come to the fore in the new role, Halfpenny also outlined some fundamental areas for improvement.

“Being a bigger player, definitely my speed [is a strength],” she said. “A lot of taller players aren’t able to move as quickly. My strength as well, being a bigger body has definitely helped out a lot.

Halfpenny was a mainstay in Norwood’s minor premiership-winning SANFLW season this year, averaging 10.6 disposals, 2.5 marks and 3.1 tackles across 11 games. The Redlegs fell short of the flag, but Halfpenny said it was “really good to be winning” and “seeing some results for all the hard work” the team had put in.

Her outstanding individual form was also enough to see her represent her state at the AFLW Under 19 National Championships. Having played in the senior grade for multiple seasons now, the 19-year-old was pleased to play and train alongside a new bunch of teammates.

“It’s been really good because obviously it’s been a couple of years since I’ve solely been with a group of people who are similar in age,” she said. “It’s good to be exposed to that and also train alongside people that I generally play against, and get to know them personally.”

Halfpenny lauded the influence of of coaches along the journey, from those who “saw a lot of potential” in her as a junior, to the Norwood and state program staff who have helped accelerate her development. She has come a long way since starting out at local club, Golden Grove.

“I started playing local footy when I was 15 at Golden Grove,” she said. “From there I did the Under 17 development squads with Norwood for three years, and at the end of my last year they invited me to come out and train with the senior side and it just went (on) from there.

“My coaches from junior level saw a lot of potential in me from younger ages and helped me get to where I am now. The coaches at Norwood and even here in the state program have all been really helpful.” 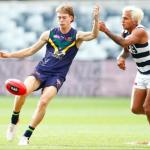 THE 2021 West Australian Under 19 squad was announced on Wednesday, with 33 players making the cut to represent their state at the upcoming National Championships. Selected to compete in games against South Australia (July 31) and the Allies (August 7), the squad features players ranging from their 19th year, to a gun 16-year-old who is also among the state’s Under 17 set-up.

The Black Ducks promise to be competitive at this year’s carnival, boasting a strong core of versatile key position prospects and dynamic midfield mix. AFL Academy members Rhett Bazzo (Swan Districts), Jacob van Rooyen (Claremont), and Jack Williams (East Fremantle) are among the best talls available in this year’s draft crop, while Subiaco pair Matthew Johnson and Neil Erasmus are set to wax in midfield having also represented the national Under 19 Academy.

Fans of AFL clubs will also have specific players to keep an eye on, with father-son and Next Generation Academy (NGA) prospects littered through the side. Exciting small forward/midfielder Jesse Motlop (son of Daniel) comes under Fremantle’s academy umbrella, while explosive East Perth mover Ethan Regan is one for Eagles. Melbourne also has a father-son in the mix, with Taj Woewodin (son of Shane) a promising midfield option.

East Fremantle produced the most members (eight) this time around, as the WAFL club continues to prove a strong breeding ground for draft eligible talent. East Perth is the next best with six players involved, including Regan and leading Colts goalkicker Jye Amiss (25 goals). There is plenty of competition for spots up forward, with swingman Bazzo likely to revert to a defensive post along with versatile 19-year-old Jaiden Hunter (Perth).

Hunter is one of a few top-agers to have earned League berths in 2021 after being overlooked at last year’s draft, with Perth teammate Jack Avery in that same boat, alongside midfielder-turned-defender Finn Gorringe (East Fremantle) and ruckman Jake South (Subiaco). Meanwhile, 18th-year talents van Rooyen and Johnson also broke through for their senior debuts before returning to the Colts grade.

After hitouts against South Australia and the Allies, WA is scheduled to take on Vic Country and Vic Metro in Victoria on September 24 and 29, to round out the National Championships.

Below is a preview of how the West Australian team may look, in a line-up put together by Draft Central analyst Ed Pascoe. Scroll further to see the full squad.