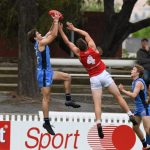 STURT forward Morgan Ferres has already made a name for himself as one of the most damaging junior goalkickers, with his sights set on breaking through for a League berth in 2021. The St Peter’s student will juggle his time between Under 18s football, school football and hopefully League selection, as he looks to cement his status as a bonafide draft prospect. The athletic tall is a force in the air, but also covers the ground well with a strong speed-endurance mix.

A: “Not bad actually. It’s pretty fun being out here with all the boys and doing a bit of professional testing. It’s good to get amongst it pretty early on in the year and get a few tests done to see where you sit. But I felt pretty happy with how I went today.”

Tell me a bit about your footy journey so far

“I started juniors at Payneham pretty young and then went over to St Peter’s College and I’ve played there since Year 7 – I’m in Year 12 now. I joined Sturt at about Under 15s level so I’ve there played from about Under 15s to Under 18s now.”

How’s your offseason been, what kind of things have you been working on?

“I did this testing early last year and I was pretty happy with my fitness numbers. I’ve spent a lot of the offseason working on my kicking, it’s definitely something I want to improve on – field kicking and a little bit of goalkicking as well. I also need to hit the gym a little bit and put on a few kilos.”

What are your main strengths on the field?

“I think for a tall, marking ability and agility and speed are things I use to my advantage to run up and get a few kicks up the ground, but also try and beat my opponent back to goal. So, outworking my opponent and aerial marking are my main two strengths I think.”

Do you see yourself as a mid-forward?

“I’ve played key (forward) last year but I haven’t done a lot of growing over the summer so I think if I were to play at the higher levels I’d be a hybrid half-forward sort of player.”

Is moving up the grades one of your main goals for the year?

“I’ve talked a bit to our Under 18s coach and we’re trying to figure out where is a good spot to play, whether it be the 18s, Reserves or seniors. I think the plan is to start in the 18s, hopefully get comfortable and get a few kicks and marks before moving up to the seniors later in the season if possible. I’ve also got college footy… so I’ll mostly play with St Peter’s with a bit on SANFL Under 18s and League if I can get there.”

How do you go about balancing footy with those other commitments?

“Being in Year 12 this year it’s definitely something new with the extra studies. But I’ve shortened my subjects a little bit now, I’m only doing three at school so I did that in preparation for this year to free up a bit more time so by the time I get home at 3:30 I can get straight into my footy without having any homework to worry about. So far it’s working well.”

How supportive has St Peter’s been with your footballing commitments?

“They’re very supportive. I’ve told them football is something I want to do and they helped me get through that with my schoolwork so they’re pretty helpful.”

How would you compare school footy to SANFL level?

“They’re very different styles of footy. School is obviously really fun playing with your mates and people you work in a classroom with during the day, then you get to go out and have a bit of fun on the footy field with them on the weekend. SANFL I like the high quality and the skill and things like that.”

Are there any players you model your game on?

“I’ve watched a bit of Charlie Curnow from Carlton, a pretty exciting forward. Him and a bit of Tom Lynch from the Crows are the two I kind of find myself in the middle of – exciting at times but also pretty strict with the way I lead with patterns. Tom Lynch I watch how he leads a lot, the way he moves around the ground is pretty elite. Charlie Curnow is an exciting forward who’s pretty cool to watch so I’d like to find a balance between those two.” 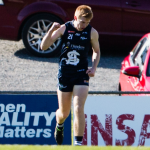 SOUTH Adelaide’s Matty Roberts is one of his state’s best draft prospects for 2021, and is ready to crack the Panthers’ League lineup having trained with the senior side during preseason. The AFL Academy member has been a key part of South’s Under 18 setup for a couple of years now and is also set to skipper the St Peter’s First XVIII. On-field, Roberts is a midfielder-forward who runs hard and makes good decisions with ball in hand, finds plenty of it, and can also hit the scoreboard.

Q: How do you think you tested?

A: “I thought I tested not too bad. Obviously I could do better in some things but I thought it was pretty good.”

Tell us a bit about yourself off-field

“I grew up in the town of Strathalbyn. I have a younger brother, Tyson and my parents Brenton and Sally. I grew up on a farm just out of Strathalbyn, went to school in ‘Strath’ up until Year 9 and now I’m boarding at St Peter’s in Adelaide and going into Year 12 this year.”

What has your footy journey been like so far?

“I started at Langhorne Creek in the Under 10s when I was about five and then progressed through the Under 10s, 12s, and 15s and then through South Adelaide’s pathway. Now I’m in the 18s program and have started training with the League team this season.”

Do you think you have what it takes to match it at League level?

“I think I can, I played in an A-Grade premiership for Langhorne Creek when I was 14, just going on 15. So I have memories from that year to be able to hopefully step up into the League this year.”

Is making your League debut one of your goals this year?

“That’s my main goal this year, to be able to play as many League games as I can.”

Describe yourself as a player

“I feel like I’m smart with the ball, I’m pretty composed with ball in hand and use it well most of the time. And I can impact the scoreboard when I go forward.”

Do you see yourself as more of a midfielder or forward?

“Sort of a mixture between both I think. I have pretty strong scoreboard impact when I go forward but obviously I like to play through the mid.”

Are there any players you can compare your game to?

“I like to look at Marcus Bontempelli. He’s a left-footer, a good ball user through the mid and can also go forward and impact there.”

How has it been juggling school and SANFL commitments?

“School’s been pretty accommodating with my South Adelaide training this year and I’ve been trying to stay on top of school work. I’m captaining the St Peter’s First XVIII this year so they’ve been really good, just making sure that I’m showing face and then obviously going on with my South Adelaide commitments at the moment. But they’ve been really good, helping me juggle both.