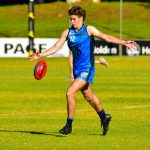 ATHLETIC Sturt youngster Morgan Ferres is a member of the 2021 State Talent Hub, and one of the most highly-rated South Australian forwards in this year’s draft class. His season commenced on Friday at Unley Oval when Sturt came up against Woodville-West Torrens, and he started the year in blistering form. With six goals, ten marks (two contested), 17 disposals and two inside 50s, it was a day out against reasonable opposition. With four behinds and multiple unselfish goal assists during the contest, it is fair to say that he could have kicked nine or ten. Regardless, he leads the SANFL Under 18 goalkicking tally after Round 1 and has set himself up for a strong season.

Ferres started the match by taking a nice mark on the lead, but sprayed his first shot on goal. He quickly redeemed his miss by juggling a mark, playing on and snapping the Double Blues’ second major in the opening six minutes. This was the first of many instances where Ferres read the flight of the ball far better than the Eagles defenders and got himself into ideal positions. Later in the first term, Ferres pushed up to half-forward to create a higher option for teammates streaming off half-back. He showed that he has quick hands when his handball released a teammate into space and led to a goal from Kai Tucker. Ferres should have kicked his second from the next centre bounce, but he missed an open shot from 35 metres out. Soon after, he worked hard to get open, marked and quickly delivered to Henry Read inside 50, who kicked Sturt’s fourth goal of the day. Ferres’ score involvement numbers were very high on Friday, and he regularly attempted to give the ball to teammates who were in better positions to kick at goal. Another example of this occurred late in the first term when, after earning a free for a hold on the 50-metre arc, Ferres looked like he was going to have a shot but instead passed it off. This unselfish play led to a goal by Cormac Dwyer.

Ferres linked up well with wingman Tucker throughout the match, who used his accurate foot skills to find the leading Ferres on numerous occasions. In the second term, after Ferres got on the end of a pass from Tucker, he was tight on the boundary and attempted to pass it off, but the kick fell short of his target. Ferres is naturally unselfish and passing was the right option on this occasion, it was just the execution that missed the mark. Four minutes in, Ferres completed a beautiful fat-side lead to earn an uncontested mark and he drilled his set shot from 35 metres out. His marking appears to have gone to another level this year, as demonstrated when he took a tough contested grab after a long kick down the line from Brad Jefferies. Ferres immediately looked inside and found Jordan Hein in the corridor, thus opening up the other side of the 50 for Sturt forwards to lead into. At the 22-minute mark, as the deepest forward, Ferres outbodied his opponent, marked and strolled into an open goal for his third. Sturt went into half time with a two-point lead, thanks in large part to Ferres’ three majors and numerous score involvements to that point.

The Eagles got well on top at the start of the third, so the ball did not enter the Blues’ forwardline much during that period. With Sturt ten points down, Ferres claimed a mark but was penalised for a push in the back. It was not until the 23-minute mark that Ferres got another opportunity to make an impact, and he did not waste it as he took a chest mark on the lead and booted through his fourth. He had another chance to goal from the next centre bounce after picking up the ball cleanly and turning sharply around his opponent, but his snap went through for a behind. Sturt reclaimed the lead just before three-quarter time and looked to have the momentum at the break.

Early in the last quarter, Ferres led into the pocket to took a strong overhead mark. With his impressive vertical leaping ability and long reach, it is difficult for his opponents to get a spoil in without chopping his arms. These traits will assist him as he rises up the grades, and this is why coaches will encourage him to take more marks overhead or out in front as he continues his development. After his grab, Ferres went back and kicked a beautiful snap around the body for his fifth. Ferres said in his preseason interview that he has been working on his goalkicking during the offseason, and this hard work clearly paid off in this instance. Ferres is very good at letting his man play in front and calling for the kick over the top into space, thus allowing him to take comfortable uncontested marks. He did this again at the 12-minute mark, which led to his sixth and final goal of the day from approximately 35 metres out. Soon after, Ferres crumbed a contest in the forward pocket, sidestepped an Eagles defender and attempted to dribble through a goal, but he just missed to the near side. As the siren sounded, Sturt ran out winners by 40 points. Ferres would have been happy with the result and his performance, as he proved that he is already a class above Under 18 level.

The scoreboard flattered Sturt in the end, as it kicked the final nine goals of the match to come away with the points. Ferres was certainly their most prominent contributor throughout, and the side required his contributions to be able to score consistently. Although Ferres will also be playing school football at St Peter’s College for much of 2021, he could also earn an opportunity to play at SANFL League level depending on how Sturt’s senior side fares. Playing against bigger bodies would be a fascinating challenge for Ferres, and he will also seek to compete and shine at the Under 19 National Championships in September and October. It will be interesting to see how Ferres’ game develops throughout the year as he attempts to impress AFL scouts en route to the 2021 AFL Draft.