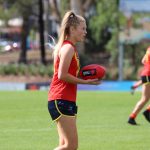 ZOE Prowse was certainly thrown in the deep end when she first pulled on the Double Blues’ jumper in the South Australian National Football League (SANFL) Women’s competition a few years back. The then 15-year-old had come from a local football club and successfully earned a spot on Sturt’s Under 15s list, but soon found herself rucking against opponents twice her age.

“It’s been a lot, so I started when I was 15 and I was thrown into the ruck pretty much straight away so I was pretty young, but it was exciting and I learnt a lot very quickly.”

Prowse held her own then, and it has held her in good stead for her junior football career, rising up through the South Australian development programs to begin training with the State Academy, something she has enjoyed. Playing and training alongside the best young talent in the state, Prowse said she noticed the difference in speed at trainings and Academy games.

“It’s been really good, been training once a week, really good to get around a different group of people, so used to training with our normal SANFL clubs, playing against each other and then coming together,” she said. “It’s a lot faster than SANFL so that’s good as well.”

Having been noticed from a young age as a prestigious talent, Prowse was the sole bottom-age AFL Women’s Academy member last year, and was joined in the Academy by South Adelaide’s Gypsy Schirmer this year. While the Sturt ruck said there was not much that had been done to-date (at the time of the interview mid-champs), Prowse was looking forward to future camps alongside the other members of the Academy.

“It’s been really good,” Prowse said. “I haven’t completed much yet, but after this trip we have camps so we can just stay here until Saturday and then we have another camp further later in the year, but hasn’t been a lot yet so far.”

Being an athletic ruck who has expanded her game into playing through the midfield or even up forward of late, Prowse noted her strengths as her timing of her jumps, and then contesting in marking situations. As for her improvements, Prowse was blunt about her most recent performance at the time during South Australia’s loss to Vic Country.

“Very simple but just my kicking,” she said. “In my last game my kicking was horrible, I really need to improve it.”

Now playing alongside plenty of youth at the Double Blues, Prowse said she was enjoying the youth influx at the club, as well as the experienced players who have aided in both her, and her teammates’ development.

As for an inspiration, the budding AFL Women’s talent – who said reaching the elite level was the dream goal – Prowse said she could not pinpoint a sole individual as inspiration, but rather a support network around her.

“There hasn’t been one specific person, there’s just people like my sister, as well as a few of my friends, as well as my parents, so little bits from a lot of people, not one person specifically,” she said.

Prowse and her Sturt side are hoping to continue their rise up the ladder and push for finals, currently sitting in sixth on the SANFL Women’s table with two rounds remaining in the regular season. 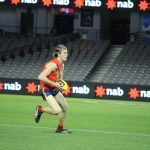 EVERY draftee has taken their own unique pathway to the big time.

Some, like last year’s number one pick Cam Rayner, are touted as high-end selections years in advance. Others, like Giants recruit Aiden Bonar, re-emerge after stints on the sidelines with injury. And some, due to a wide variety of reasons, drop out of first-round calculations as the season progresses, as was the case with Port Adelaide ruckman Sam Hayes. But as is often said when draft day approaches, where you end up being taken is merely a number once you make it into club land.

One such draftee went from a virtually unknown, skinny utility to a draft bolter with plenty of x-factor, on the back of an outstanding year for South Australia, Sturt and at school level with Sacred Heart College. That bolter was Charlie Ballard who was drafted to the Gold Coast Suns with pick 42 in last year’s AFL National Draft.

After missing out on inclusion in Sturt’s 2015 under-18 squad, in the space of just two years, Ballard grew no less than 15 cm’s, allowing him to be tried in key position roles at either end of the ground.

At the start of 2017, Ballard said his initial goals were to “make the Sturt 18’s team and then just chip away at my footy and see how [he] went”.

“I had bigger goals at the back of my mind but kept my mind short-term,” Ballard said.

As the season progressed, strong performances at school and club level caught the attention of state representatives. This led to his inclusion in South Australia’s Under 18 squad for the mid-year national championships.

Ballard’s neat skills, mobility, cleanness at ground level and strength overhead proved to be too good for opponents when he lined up for Sacred Heart College. Despite his height and proven ability up forward and down back, Ballard played predominantly across the wing in for the Croweaters.

Ballard, 18, says the national championships were “a step up from all the footy that I’ve played before, quick and intense, but I just tried to treat it like any other game”.

“It really helped having a couple of good mates in the team to help me get settled,” he said.

Featuring in all four games for South Australia, Ballard excelled under pressure, finishing the tournament averaging 18 disposals (11 kicks, seven handballs), 4.3 marks, 1.8 tackles and 0.3 goals. By this point in time, recruiters across the nation had all heard the name Charlie Ballard and were sure to monitor him closely for the remaining games and the upcoming national combine, to which the utility received an invitation.

“I probably first realised being drafted was a possibility when I got told by a couple of coaches that it could happen, but really clicked when I was lucky enough to get a combine invite,” the 18 year old said.

Coming into the draft, there was a reasonably significant amount of hype around Ballard, with many draft experts predicting the Suns would swoop at the back end of the first round, with  selection 19. In the end, it was the Gold Coast who picked him up, albeit later than perhaps anticipated, at pick 42. It capped off an outstanding year for Ballard, whose stocks continued to rise as the season progressed.

Now, with one AFL pre-season under his belt, Ballard has well and truly set his sights on making a strong early impression in Queensland, either at NEAFL or potentially AFL level.

“Settling in was really easy, living with a player makes it pretty cruisy and you learn a lot about good habits, etc. The preseason was really good, exhausting but really rewarding coming up to the seasons’ beginning soon,” the Suns recruit said.When asked about where he sees himself playing at the highest level, Ballard said his preference was midfield, but anywhere to get a game would be great

“At the moment I think I’d still like to play on the wing but I expect to be a bit all over the place, I just have to adapt to different positioning.”

Many South Australians will be watching on with interest in 2018 and beyond to see how the talented utility goes at the elite level.