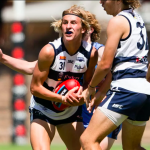 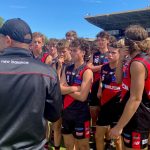 THERE were plenty of upsets across the third round of the South Australian National Football League (SANFL) Under 16s competition, with some sides claiming their first win, and others suffering their first losses.

The Roosters recorded their first win of the SANFL under-16 season with a strong showing against Woodville-West Torrens at X-Convenience Oval. North Adelaide booted the first three goals of the contest and led for most of the day, but the Eagles wrestled back momentum at-times and managed to steal the lead for parts of the second and third terms. But the red and whites responded well, nailing four last quarter goals to hand the Eagles their first defeat of the 2021 season.

A huge game from North Adelaide midfielder Kane McAuliffe went a long way to securing the points for the Roosters. McAuliffe’s work rate was immense, seemingly making an impact at every contest he attended. He finished a scintillating performance with a mesmerising stat-line of 43 disposals, 17 marks, nine inside 50s and seven rebound 50s. He was not alone, however, with Angus Tully once again finding plenty of the ball on the inside of the contest and Toby Turner generating effective rebound from half-back (26 disposals and 10 rebound 50s). Up forward, DJ Smith made the most of his opportunities, booting three majors and clunking three contested grabs. Owen Kalic and ruckman Darcy Kelly were also among the bests for North Adelaide.

Onballer Pat Toole was the Eagles best performer, finishing the contest with 34 disposals, six clearances seven marks, five tackles, seven inside 50s and a goal. His midfield partner Jedd Thomson (29 disposals and six marks) also found plenty of the football. Declan O’Dea and Oscar Pearce were the only multiple goal kickers for Woodville-West Torrens, both kicking a couple.

Norwood bounced back from a tough six-point loss to Glenelg last round by snatching a late victory over the winless Bulldogs in hostile territory. The Bulldogs jumped out of the blocks, piling on four-goals-to-one in the opening term. Norwood hit back in the second but Central Districts entered the main break with a seven-point advantage. Brayden Rachwal‘s third goal ensured the Redlegs took a slim lead into the final change. Bulldog Oliver Robinson put the home side ahead at the 16th-minute mark of the last quarter, but Norwood rallied to kick three majors in four minutes and secure the win.

The aforementioned Rachwal caused a number of headaches for the Central Districts defenders. The big-man’s aerial ability was impressive all day, finishing with three goals and four contested marks to go with nine hit-outs. Connor Butcher led the way through the midfield, gathering 25 disposals, one goal, seven clearances and five inside 50s. Kade Madigan (21 disposals, six marks and six rebound-50s) continued his solid start to the season, with Jaidyn Mead (13 disposals and two goals) and William Rowlands (19 disposals, one goal, five tackles and six inside-50s) also providing strong contributions.

Trent Tattoli was clearly the Bulldogs best player, racking up 35 disposals, six marks, five tackles, six clearances, six inside 50s and a goal through the midfield. The efforts of Jayden Matz through the ruck will have impressed ‘dogs coach Chris Gerhardy. Matz regularly provided his side with first use in the middle, recording a game-high 24 hitouts. However it was his work around the ground which really stood out, gathering 19 touches and laying five tackles. Thomas Cochrane (20 disposals and four rebound 50s) and Josh Davey (19 disposals and five clearances) will also be proud of their efforts.

The Bloods got their season rolling with a 17-point win over the previously undefeated Panthers at Hisense Stadium. West Adelaide’s defence restricted South to just one goal in the first half, however the game broke open after the half-time break, with the Panthers compiling four unanswered majors to steal the lead. But the Bloods rallied, kicking four goals in a handful of minutes to wrestle back the momentum and post a game-high lead, one that would not be overcome a second time.

It was an even effort from the Bloods juniors, with five players recording over 20 touches and seven collecting 15 or more. Will Patton was the standout, offering an abundance of rebound from defence. He finished with a game-high 28 disposals, 10 marks and nine rebounds. Lukas Zvaigzne (26 disposals, one goal and six marks) showed plenty, as did Judd Hansen (22 disposals and seven marks) and Max Jones, who booted three goals from 14 disposals.

Ryan Pearsons looked the most threatening forward on the ground. He kicked four goals and took six marks but also provided some handy rebound when thrown further afield. Panthers ruckman Tom Schirmer asserted his dominance on the game through the middle. He proved a step above the Bloods rucks, finishing with 29 hitouts and five clearances. He also sent the ball inside 50 seven times. Jace Daris was the leading disposal winner for Clay Sampson’s men, with Sid Draper and Sebastian Oliver also among the Panthers better performers.

Sturt handed Glenelg their first defeat of season 2021 with a 15-point triumph on Sunday evening. Glenelg booted the first goal of the game after just 26 seconds, however Sturt took until the 15 minute mark to land their first blow. The Double Blues entered the half-time break with a 12-point buffer as both sides added two majors in the third quarter. Goals to Tigers’ Kai Reid and James Dutton gave Glenelg the lead early in the final quarter, but Sturt booted four of the final five goals to record their second win in as many weeks.

Tough-nut Kobe McEntee was relentless all day for the victors, laying a game-high ten tackles. He also collected 21 disposals and seven inside 50s. He was well supported by Ned Atkinson and Luca Lade, however it was the work of forward Chad Reschke which proved invaluable. Reschke booted four goals for the game and could have had an even bigger bag, if not for some inaccuracy in front of goal. Nevertheless, his contested marking proved very difficult to defend against. Tarran Sanderson also booted two goals for Sturt, including the sealer.

Benjamin Ridgway continued his prolific ways, accumulating a game-high 34 touches, along with six marks, six tackles and seven clearances. Ridgway has emerged as one of the under 16 competition’s most well-rounded onballers, piecing together three consistent games to start the season. Lucas Camporeale, the son of former-Carlton star Scott, also performed well despite the result, finishing with 26 disposals, eight marks and two goals. Kaiden Adkin was strong in the coalface, while James Dutton and Brock Summerhayes both booted two goals.