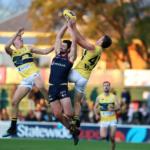 IT took two weekends to complete, but the South Australian National Football League (SANFL) Round 11 results are in the books with plenty of standout performances across the board. While many of the top-end talented Under 18s were representing South Australia at the AFL Under 18 National Championships, there was still both under-age and mature-age talent on show, including some serious numbers from AFL-listed players.

Adelaide and Glenelg moved further at the top of the SANFL League table over the split Round 11, defeating Sturt and Central District respectively. Port Adelaide jumped into fourth spot with a win over North Adelaide to replace the Redlegs in the position, after Norwood suffered a shock heavy loss to Woodville-West Torrens Eagles at home. Angus Poole caused all sorts of headaches for the Redlegs, booting 4.1 from his 22 disposals, five marks and three tackles, while Christopher Hall had a day out with 29 disposals, four clearances and two goals. Bradley McKenzie did all he could for Norwood in the disappointing match, racking up a game-high 31 touches to go with his 11 marks and four tackles. In Glenelg’s big win over lowly Central District, former AFL forwards, Jesse White and Liam McBean combined with White having a day out up the field with 21 disposals, four marks, six clearances and a goal, while McBean booted 6.1 from 14 touches, five marks and four tackles. Marlon Motlop showed his class with a dominant 35-disposals, eight-clearance, six-mark and two-goal game to be best afield. Jarrod Schiller was the best for the Bulldogs, amassing 26 disposals, five clearances and laying nine tackles. Patrick Wilson continued his great season with the hope of a call-up to Adelaide’s senior side, laying a whopping 22 tackles to go with his 23 touches, eight marks and four clearances, while former AFL forward Matthew Wright recorded 23 touches, seven tackles, five clearances and a goal. For Sturt, Sam Colquhoun (25 disposals, 10 clearances and 11 tackles) and James Battersby (20 disposals, five clearances and 13 tackles) tried hard throughout. If we’re talking AFL recalls, then none put their hand up more than a trio of Port Adelaide players. Tom Rockliff had a lazy 57 disposals – not a typo – as well as 14 clearances, 12 tackles and seven marks, while Justin Westhoff picked up an impressive in his own right, 37 disposals, nine marks, six tackles, four clearances and three goals, as Sam Powell-Pepper also impressed with 33 disposals, four marks, five tackles and three clearances. Aidan Tropiano was the best for the last placed Roosters, recording 29 disposals, six marks, seven tackles and seven clearances in the loss. In West Adelaide’s home loss to South Adelaide, Dallas Willsmore produced an impressive performance with 29 touches, 10 marks and three tackles, but it was the consistency of the Panthers midfield, including Mark Noble (24 disposals, six marks, six tackles, three clearances and a goal) and Malcolm Karpany (22 disposals, seven marks, six tackles, two clearances and a goal) that saw them home.

As it stands heading into Round 12, there are seven teams left in the hunt for the top five spots, with Sturt and Eagles just outside the five by a win, as Adelaide and Glenelg have gained some breathing space over South Adelaide, Port Adelaide and Norwood who are only separated by percentage from third to fifth. Central District, West Adelaide and North Adelaide hold the bottom three spots.

It was a good weekend for the fans as all four home sides triumphed, with Norwood leapfrogging Woodville West Torrens thanks to a victory over the Eagles, as did Sturt who knocked off North Adelaide. West Adelaide moved into top spot with a win over South Adelaide, after Central District slipped up against bottom two side Glenelg. Lachlan Pascoe impressed for the Redlegs with 28 disposals, six marks, eight clearances and five tackles, but he was far from alone with Sam Buckham picking up 29 touches, six marks, seven tackles and six clearances. For the Eagles, Harrison Morgan dominated up forward with seven straight goals from his 16 touches and five marks, but it was to no avail in the five-point defeat. Declan Carmody impressed for Glenelg in its win over the Bulldogs, standing up with 17 disposals, eight marks and two goals after coming back from South Australian state duty, while Nicholas Leck slotted four goals from 17 touches, eight marks and six tackles. For the visitors, Kyle Presbury (33 disposals, three marks, nine clearances, 12 tackles and two goals) and Darcy Pisani (34 disposals, three marks, eight clearances and nine tackles) were the two standouts. In Sturt’s narrow five-point triumph over Norwood, Casey Voss kept Brisbane Lions fans interested with 24 touches, four marks, five clearances and five tackles, while South Australian representatives, Oliver Grivell (18 touches, four marks and four tackles) and Anzac Lochowiak (14 disposals, one mark, 11 tackles, three clearances and one goal) were also impressive. For Norwood, Max Lower was best on ground by some way, racking up 34 disposals, 14 clearances, three marks and eight tackles, while former Port Adelaide goalsneak Jake Neade laid 14 tackles to go with his 23 touches and four clearances. In the final game, West Adelaide’s Sam May impressed with 24 touches, three marks, seven clearances, six tackles and a goal, while Tom Morrish (13 disposals, seven marks and three goals) and Connor Fairlie (25 touches, four marks, six tackles and four clearances) also stood out. Sam Whitbread was solid for the Panthers, amassing 22 touches, eight marks, seven tackles and six clearances, while Bailey Snelling had 18 disposals, 10 marks, three tackles and a clearance.

With first placed West Adelaide taking on third placed Norwood this weekend, it is sure to create some ladder movement, as Central District looks to take advantage of one of its rivals losing with a game against bottom two side, North Adelaide. Sturt and the Eagles are just a win off the top three sides, while Glenelg sits two games outside the top five, with South Adelaide last with three wins from 11 encounters.

Heading into Round 12, the Eagles sit comfortably on top as the raging favourites with 10 wins from 11 games, three wins clear of North Adelaide and Glenelg with West Adelaide a game behind the Roosters and Tigers. South Adelaide and Norwood need to make up some ground if they are to make finals being two wins behind, while Sturt and Central District sit in the bottom two spots, but are just three wins outside the top five.