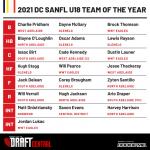 WITH only Saturday’s grand final left to play, now is the perfect time to look back at the SANFL Under 18s season that was in Draft Central‘s 2021 Team of the Year (TOTY). Finalists Glenelg and Woodville-West Torrens combined to contribute nine members of the 22-man squad, which is led by West Adelaide midfielder Cade Kennedy (captain) and highly touted South Adelaide prospect Arlo Draper (vice-captain).

Nine of the selected group represented South Australia in last month’s Under 19 National Championships bout against Western Australia, while a further two did so at Under 17 level this year. There were also plenty of talented South Australians who narrowly missed, either due to playing more football up the grades, in school competitions, or through the squad’s overall strength.

We take you through all 22 selections line-by-line, highlighting the strengths each squad member brings to the collective and exactly why they each feature.

Clean foot skills and composure with ball in hand are prominent traits of the TOTY defence. Named in the back pocket, West Adelaide’s Charlie Pridham enjoyed a standout season for the Bloods, playing every game (including two finals), and finishing with the most disposals and kicks of anyone in the competition. A reliable contributor down back, Pridham remained calm under pressure and provided plenty of rebound and drive from the backline.

Glenelg’s Dayne McGary earned selection at full back following a strong season in the yellow and black, which saw him average 15 disposals and six marks per game. Often assigned the oppositions best tall forward, McGary’s strength and clean kicking were vital for the Bays’ success. Eagles defender Brock Thomson was an obvious selection down back following an ultra consistent year for the grand finalists, which saw him average 23 disposals, four marks and close to six rebound 50s.

North Adelaide gun Blayne O’Loughlin demanded a half-back spot after a terrific season at Prospect which saw him earn state Under 19 selection. As clean and composed as anyone under duress, O’Loughlin’s attacking instincts and dash from defence were hallmarks of the Roosters’ game plan. Oscar Adams joins fellow Tiger McGary in defence, slotting into the centre half-back role. Adams spent the year rotating between the ruck and a defensive role, with his height, reach and aerial prowess earning him state honours.

State Under 19 vice-captain Lewis Rayson slots in on the other half-back flank, having provided the Bays with plenty of trademark run-and-carry throughout the season. Also effective through the midfield, Rayson is a high metres gained type of player, whose dare and attack on the ball has proven valuable for SA and Glenelg alike.

South Adelaide’s Isaac Birt was a simple selection on the wing following a breakout season which saw him rise to become one of the state’s best outside midfielders. His combination of speed, endurance and crisp ball use cut apart games week-after-week, with his Round 10 effort against Norwood (31 disposals, two goals, 11 marks, five tackles and eight inside-50s) sure to have caught the attention of scouts.

Hard-working West Adelaide skipper Cade Kennedy is the starting centreman in the TOTY and has been named captain after displaying tremendous on-field leadership to inspire the Bloods’ rise from bottom last season to a preliminary final berth. He averaged 27 disposals, six marks, five tackles, four clearances and five inside 50s as one of the competition’s most well-rounded on-ballers. Hard at the contest but an effective run and carry option, Kennedy is well-deserving of a spot in the starting midfield.

Eagles utility Dustin Launer could have slotted into just about any position on the team, such is his versatility, but his efforts in a balanced midfield role see him selected on the wing. A classy ball user and hard runner, Launer collected 30 disposals in five games, including efforts of 42 and 37 (twice). Talented bottom-aged Panther Will Verrall narrowly edged out Centrals’ Saxon Evans and West’s Oscar Steene to win the number one ruck role. Verrall finished second in the competition for total hitouts, but was arguably more dominant when the ball hit the ground, with his ball-use and willingness to compete at ground level impressive for a player of his height.

North Adelaide’s Hugh Jackson was another obvious choice in the midfield rotation. He shot out of the blocks and finished with an average of 29 disposals, five marks, four clearances and five inside 50s. A smooth mover and good ball user on his left foot, Jackson was also clever by hand throughout the year. Despite spending time in the Reserves and League grades, South Adelaide’s Arlo Draper was too good at Under 18s level to leave out of the team of the year. Averaging 24 disposals, four marks, five tackles, six clearances and a goal per game, Draper was a class above the field in his nine matches. A classy mover who excels in traffic at stoppages, Draper also proved difficult to handle up forward and has been named vice-captain of the side.

The half-forward line of the TOTY certainly packs a punch, led by Glenelg bull Hugh Stagg. Stagg’s power and strength was integral to the Bays’ engine room throughout the year, but he also proved his worth up forward by kicking 23 goals in 13 games for the minor premiers. At centre half-forward, competition leading goal kicker Will Pearce demanded selection after a dominant season with the Eagles which saw him bag 47 majors from 20 matches and lead the competition in contested marks. Loxton North product Jesse Thackeray produced a great season for the Bloods. Splitting his time between the midfield and half-forward, Thackeray’s work rate was always high and his defensive work wouldn’t have gone unnoticed by the West Adelaide coaching staff.

Despite not being draft eligible for another couple of years, brilliant small forward Jack Delean is thoroughly deserving of his forward pocket role. He booted 26 goals in eight Under 16 matches to help the Panthers to the flag earlier in the season, then took to the Under 18 competition like a duck to water, bagging 35 goals in 13 matches – including two hauls of five, never failing to hit the scoreboard. Electric at forward-50 stoppages, Delean wrecked havoc in the air and on the ground in a sensational season in the blue and white.

Glenelg’s Corey Brougham narrowly edged teammate Jack Harding to take out the all-important full forward position. A reliable set shot for goal, booting 38 goals in 14 matches, Brougham was unstoppable on the lead and his vice-like hands saw him mark just about everything which came his way. Zippy Rooster Zyton Santillo‘s defensive pressure and creative ball use through the midfield and in attack saw him earn a spot on the opposing pocket. Santillo produced a consistent season, finishing with an average of 23 disposals, five marks, five tackles, three clearances and three inside 50s per game.

The interchange bench was hotly contested, but Norwood’s Matthew Dnistriansky simply had to be picked to fill a role across the backline. Norwood’s most consistent player in what was a tricky year for the defending premiers, Dnistriansky’s measured ball use, sound vision and decision making were highlights of his year.

Following a dominant preliminary final showing, in which he booted five goals and lead his team to victory, Eagles captain Jordan Lukac was a late inclusion into the squad. Impressive up forward, the athletic big man also helped out in the ruck and got stronger as the season wore on. Bulldogs tall Saxon Evans finished the season with the most hit-outs of anyone and is arguably the best tap-ruckman in the state. Athletically gifted, Evans was perhaps unlucky not to be given a run in the state side against Western Australia.

Harvey Harrison is North Adelaide’s fourth selection in the team of the year. A midfielder with terrific running power and handy skills at top speed, Harrison is good in-tight but spreads as well as anyone in the competition. He finished the year averaging 25 disposals, six marks, four tackles, five clearances and three inside 50s.

As is the case with all representative sides, there are a number of talented players who should consider themselves unlucky to have missed the cut. Glenelg had a number of fantastic contributors throughout the season, including medium defender Cooper Beecken, smart forward Harry Tunkin, classy midfielders Darcy Gluyas and Hunter Window, and strong-marking tall forward Jack Harding.

West Adelaide’s Kobe Ryan would have easily made the side but spent much of the year playing college football with Sacred Heart. His Bloods teammates Dylan White and Luke Young also narrowly missed out. Central District struggled at times, but Tahjin Krieg and Isaiah Dudley were standout performers. From South Adelaide, rebounding defender Lachlan Hayes and nimble midfielder Luke Mitton could also consider themselves unlucky to have narrowly missed the cut.