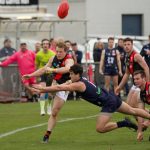 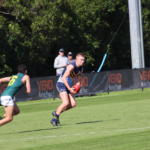 NEW South Wales/Australian Capital Territory (NSW/ACT) Rams have claimed the Under-16 National Championships Division 2 title with a convincing 41-point win at Aspley today. The Rams booted the first nine goals of the game despite Tasmania dominating possession and forward 50 entries, taking the Devils an hour to slot their first major. Once they did they found their rhythm, booting three consecutive goals to cut the deficit to 32 early in the final term, but it was a case of too little, too late as the Rams booted two of the final three goals to win 11.9 (75) to 4.10 (34).

The first term was a dominant showing from the home side with NSW/ACT peppering the goals early, before finding their range with accurate shots from a mixture of set shots and forward 50 stoppages. Matthew McKenzie was busy in the front half setting up scoring opportunities when he found Kai Watts 40m out straight in front for the Rams’ first of the day. He almost made it two five minutes later but just missed, and it was Tasmania’s turn to then take control of possession for a few minutes. Locked in the Devils’ forward half for a few minutes, they could only muster the two behinds before it resided in the Rams’ half for the rest of the quarter.

An end-to-end play saw Euriah Hollard kick a miraculous goal from the pocket, which was then followed by majors to Jordan Endemann from a set shot, and Sam Stening and Austin Ball from quick kicks close to goal from stoppages. McKenzie almost had a major himself, but the ball was touched off the boot before it bounced through the big sticks. Josh Fahey had a strong first term for the Rams, while for Tasmania, Noah Holmes was busy up forward while Baynen Lowe and Darcy Gardiner tried their best through the midfield. It was a dominant first term by the Rams with the wind however, heading into the first break with a 32-point advantage.

The second quarter consisted of Tasmania dominating possession, but NSW/ACT dominated the scoreboard. The Rams had single digit inside 50s but still booted 3.1 to Tasmania’s sole behind, as the Devils overused the football inside 50 with more handballs to try and set up the play. It enabled the Rams to set up in defence and get numbers back, then run it out of the back half, even though Tasmania had repeat entries. Will Splann and Zac Morris both had chances but one hit the behind post and the other missed to the left.

On the other hand, the half chances for the Rams were converted with Stenning and Ethan Grace both kicking their second goals – the latter from another forward stoppage. The next 10 minutes was again controlled by Tasmania but they just could not seem to buy a goal as the Rams defence held up. Running up the other end, McKenzie ran onto a loose ball in the goalsquare and put it through for the third of the term. Holmes took a strong mark out in front on the 50m and found Sam Banks in space, but the kick was to the top of the goalsquare and once again cleared by the opposition defence. Stenning almost added more pain to the Devils with a set shot after the siren, but his shot sprayed and went out on the full for the half-time margin to sit at an even 50 points.

The third term was much the same, with Tasmania dominating possession in the forward half with repeat forward 50 entries, but only a snap from George McLeod 16 minutes in – an hour since the first bounce – finally split the big sticks. The cheers from the Tasmanian faithful went up as they finally got some reward for effort, with their endeavour great all game, but their finishing wayward. They finished the quarter with 1.5 as several set shots went wide as Sam Sherriff, McLeod and Holmes all missed, while Ryan Whitney also just missed his snap close to goal. The Rams side had only a handful of inside 50s but again managed to create a goal earlier in the term with Hollard marking inside 50 thanks to good body work one-on-one and converting the set shot from 25m out. It was a much better quarter from Tasmania, but once again showing that had the Devils been accurate, they could have well and truly being in the contest, instead facing a 44-point deficit at the final break.

The final quarter gave Tasmania the slightest of sniffs with the crowd thinking “surely not?” as Jordy McIvor answered the call with a snap from the pocket in the opening two minutes to goal from the set shot. Fahey asked him if he had a left foot as he kicked it, only to answer his own question seconds later with “I guess he does”. McLeod quickly added his second a minute later and the margin was 32 with 19 minutes remaining. The Rams steadied after that however as Stening and Will Edwards added majors to their team’s total, before Holmes finally put one through the middle after a few misses as a late consolation goal for the Devils.