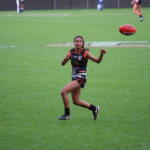 SOUTHERN Districts headlined Round 7 with a big win over reigning premiers, Waratah. The win helped the Darwin Buffettes edge closer to the top of the table, as they got a win over Tracy Village. But the team that has surpassed them all is the Queen Ants, after securing a big win over the Wanderers to cement them as one of the favourites to take home this season’s Northern Territory Football League (NTFL) Women’s premiership.

The Darwin Buffettes continued their strong season with a win against the Razorbacks, getting over the line by 34 points. The game was even at the end of the first quarter, with just one goal separating the two sides. Then, the Buffettes kicked away in the second quarter, outscoring Tracy Village three goals to one behind to take a 25-point lead into half-time. In the third quarter, the Razorbacks were able to peg the margin back, kicking a goal to match Darwin’s one goal for the term. However, the second quarter repeated itself in the last term, with the Buffettes again holding the Razorbacks to just one point. Darwin had two multiple goal-scorers on the day, with Mattea Breed and Tayla Hart-Aluni both kicking two majors. Tikesa Docherty-Cole and Bianca Stokes were the other goal scorers, and they were also named in the best. Tracy Village’s only goal scorer was Elissa Ienco, and because of her efforts, she was named second-best. Zhoe Clarke played her best game for Tracy Village, as she was awarded best-on-ground honours for her side.

Nightcliff’s woes continued against Palmerston in Round 7, going down by 52 points to the in-form side. The Magpies didn’t get off to an immediate flyer, scoring just the one goal in the first term. They followed this up with a three-goal second quarter, all while holding Nightcliff scoreless, giving them a 32-point lead heading into the main break. The Tigers broke even in the third term, with each team only scoring one behind. But the Magpies were able to make amends in the fourth quarter, outscoring the Tigers three goals to none. Northern Territory Under 18 representative, Janet Baird starred inside 50, ending the game with three goals next to her name. She was complemented by a goal each from Tania Parriman, Marijian Singh, Hayley Davey and Natasha Medbury. Tabitha May, who was named Northern Territory’s Most Valuable Player (MVP) at the AFL Women’s Under 18 Championships, was named best-on-ground for the third time this season, highlighting her stunning form for the Magpies. Charmaine Marshall, Jess Leamey, Vanessa Mounsey and Billie Byers were the other players who impressed for Palmerston.

Southern Districts have pulled off the upset of the season, defeating reigning premiers, Waratah by five points. The game was tight throughout, with scores being level at a goal a piece at the end of the first term. Going into half-time, just one point separated the two sides, with the Crocs only managing to add one point to their score to take that slim lead into the main break. In the third quarter, the Southern Districts broke the scoring deadlock with a crucial major to extend their lead to nine points heading into three-quarter time. In the last quarter, the Warriors fought back with a major, giving them a chance to wrestle back the momentum. But somehow the Crocs managed to hold on, despite only scoring two behinds in the last quarter. Usual names, Kelsey Patterson and Tahlia Holtze were the Crocs’ goal scorers, continuing their marvellous seasons inside 50. Usual names were also the trend for Waratah, with NT Thunder’s Sue Nalder and NTFL Women’s leading goal scorer, Lisa Miceli getting the Warriors’ majors on the day. Experienced NT Thunder star, Lisa Roberts led the way for Waratah, while Joanna Kolodziej, Claudia Fabris, Pippa Cox and Sharona Bishop were also solid.

Pint continues to charge towards victory in season 2018/19, cementing a spot on top of the ladder with a win over the Wanderers. The Wanderers were able to halt Pint’s scoring in the first term, with neither team managing to kick a goal. Then the Queen Ants got going in the second quarter, outscoring the Wanderers two goals to none. Coming into the third quarter with a 13-point lead, Pint failed to really put a dint into the margin, kicking just the one goal in the third term. The Queen Ants tried once again in the last term to boost their percentage, but their inaccuracy came back to haunt them, as it has done on many occasions during this season. Pint managed just one goal from seven attempts in the last term, but this couldn’t prevent a fifth victory for the home side. Madeline Keeble showed good form up forward, kicking two of Pint’s four goals. The other goal scorers were Mellissa Gunn and Kristen Smits. Despite no goal scorers for the Wanderers, Sophia Mauboy, Lauren Motlop and Pierre-Angelique Koulakis were solid in the 29-point loss.