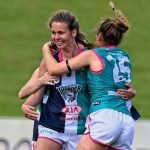 SWAN Districts have cruised to their ninth West Australian Football League Women’s (WAFLW) win of the season from nine games, delivering a solid performance against Claremont, breaking away in the second half to triumph by 19 points at Revo Fitness Stadium on Sunday afternoon. A four goal to one second half saw the competition’s top side continue their unbeaten streak through 10 rounds.

Following the cancellation of last week’s round of action across Western Australia due to a COVID-19 scare, WAFLW action returned for round 10 as Claremont hosted the powerhouse of the competition in Swan Districts. The first quarter began in typical Swan Districts fashion, as the game was tightly contested with an extremely hot footy. Both teams battled to burst their way through packs and scoring was pushed aside in exchange for a territory battle. Claremont kicked the first goal through Tessa Doumanis, as they shot out to an early lead. This lead did not last long though, as Swan Districts responded shortly after through Bianca Webb, and following another goal for the term, they began to gain control of the game, which they would never surrender from then on. The second quarter saw two goals from each team, as both teams consistently peppered the ball inside 50, with inaccuracy interrupting Swan Districts’ momentum. Claremont trailed by 11 points at the main break, with plenty to improve on as Swan Districts snatched control of the game but just could not deliver scoreboard punishment.

The third quarter saw more of the same, with the poor scoring accuracy of Swan Districts keeping Claremont within striking distance. The fatigue of players began to set in during the third term, with a solitary Swan Districts goal the only major of the quarter. The backlines of both sides found themselves working overtime with poor inside 50 entries resulting in plenty of intercept possessions for the term. With Swan Districts holding a 17-point lead going into the final term, Claremont found themselves still in the game, but it would require a bigger effort than the first three quarters. However, their opponents were simply too good to close out the game, kicking two goals to seal the game early in the term. Finishing the game with a win by just over three goals, Swan Districts became the first game in WAFLW history to win nine games in a row. They will prove hard to stop.

For the victors, Hyde was exceptional with her work on the wing. She ran hard all day from contest to contest as her wing was where the ball was often found. Her first quarter goal was a fantastic reward for effort, and she never dropped her intensity for the remainder of the game. Teammate Dana East was just as good, displaying her fantastic ability to maintain clean hands when the ball is in dispute. For Claremont, Ella Smith fought hard all day to keep her side in the game, and put her body on the line all day, demonstrated by the hard hit she wore late in the final term. Doumanis was also prominent with her two goals.

Around the leagues, Peel Thunder kicked away to finish the round with a 29-point triumph over East Fremantle at David Grays Arena on Saturday evening. Despite only five points separating the teams at half time, Peel Thunder proved too good and kicked six goals to three in the second half to secure the win. For Peel Thunder, Kate Bartlett kicked three goals, while Ella Roberts and Aisha Wright added two apiece, and Kira Phillips threatened to have a big day, kicking 1.6. Courtney Rowley and Sabreena Duffy were named the side’s best. For East Fremantle, Roxanne Roux, Sharon Wong, Madeline Ross and Gabrielle O’Sullivan each booted one goal. Laura Mcclelland and Phillipa Seth were named in the bests for the side.

A strong final term from Subiaco saw them burst away with a 25-point victory against a brave South Fremantle side at Leederville Oval on Sunday night. South Fremantle trailed by only three points at the final break, but Subiaco were able to flick the switch and nail the game shut with a three goal to nil final term to seal the win. For Subiaco, Madizen Wilkens, Amy Hunt, Tarnica Gosliano, Abbey Dowrick and Jamie Rust were the goalkickers while Jayme Harken was best afield. For South Fremantle, Liusaidh Gilchrist kicked a goal and was her side’s strongest performer, while Zoe Huggett kicked the other goal for the team. 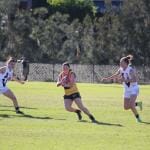 THE Dockers were ruthless again this year with their delistings, deciding to throw all their hopes in this year’s draft. The Dockers seem to target midfielders and half-back flankers to give the team some much-wanted speed. However, some talented Western Australian players opted to travel interstate, and this lost talent would have been useful for the Fremantle rebuild.

There were many high-profile players from Western Australia who could have been Fremantle’s first pick, however, the honours went to Jasmin Stewart. The 19 year-old left-footer has had an outstanding year for Claremont with her elite ball use and hard work ethic. This year she claimed the Tigers’ Best and Fairest award for all her efforts in the West Australian Women’s Football League (WAWFL) . Stewart could be the tag-team partner that Dana Hooker has been looking for.

When Belinda Smith went to play for the Western Bulldogs, it left a huge hole in the Fremantle backline. Under-18 All Australian, Sabreena Duffy is the perfect candidate to fill the gap. Duffy can play half-back or midfield, and her skills shown in the AFL Women’s Under 18 Championships saw her become the Most Valuable Player (MVP) for Western Australia. For most experts, Duffy was a no-brainer to be picked by Fremantle.

This year, the East Fremantle Sharks took home the WAWFL premiership with Phillipa Seth playing off halfback. Seth was the runner-up for the Sharks’ Best and Fairest this year and has been a heavy contributor to East Fremantle all year. Her premiership experience will be a valuable asset to the the Dockers as they bolster their defensive stocks.

The Subiaco Lions were the underdogs of the WAWFL competition but made it all the way to the Grand Final  Courtney Stubbs was part of that midfield that battled week after week. Stubbs has had the pleasure of playing with greats Hayley Miller, Lara Filocamo, and young gun, McKenzie Dowrick. Stubbs was an equal contributor among this elite midfield growing each week. Unfortunately, her teammate Filocamo was delisted by Fremantle earlier this year, and now Stubbs will be taking her place at Fremantle.

After two years of WAWFL, Parris Laurie was promoted to captain of the Claremont Tiger in 2018. Laurie showed a lot early this season in the ruck but had to leave towards the end of the year. She is surprisingly mobile for her height and covers the ground well. Alicia Janz has been waiting for some assistance in the hit-outs, and Laurie will have no problem with that.

After this year’s draft, Laura Pugh made history. She is the first player from the West Perth Falcons to be drafted in the AFL Women’s competition. One of the reasons for this is Pugh’s defensive intercept marking, which has been a shining light for the Falcons in a poor year. Fremantle will be eager to slot her into a back line that has been under immense pressure in previous years.

Another Claremont player selected for Fremantle, and at this pick, Matilda Sergeant is a steal. Sergeant was selected in the Under 18 All Australian squad for this year. Her run and carry is similar to the likes of Sabreena Duffy. Sergeant mainly plays midfield but can play the role of flanker if she must. Her clean foot skills and strong hands could see her playing in Round 1 for the Dockers.

The Dockers have definitely boosted their defensive stocks and added more depth to their midfield. However, they were in desperate need of forwards, and they didn’t pick one. Under 18 representatives, Sonia Dorizzi and Kate Bartlett would have been perfect, but Bartlett was drafted to the Western Bulldogs and Dorizzi was overlooked. Another forward who was overlooked was Kira Phillips, who kicked 79 goals in the WAWFL season. With the retirement of Amy Lavell and the delisting of Emily McGuire, question marks loom as to who will kick Fremantle’s goals. 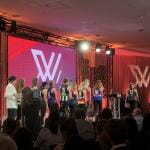