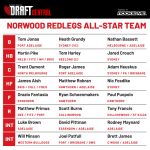 Brayden Maynard is one of those players that gets by with very little fan fare. He isn’t an overly impressive kick and doesn’t have a huge tank on him, but that doesn’t stop him tenaciously chasing down opposition players and making sure they know he’s around.

Maynard is a fantastic tackler and in this day and age of forward pressure, he offers it in bucket loads. Maynard is similar to Paul Puopolo in the way that he can use defensive pressure to turn into offensive pressure – tackling defenders to create scoring opportunities.

He has also been trialled up the ground through the midfield, but due to his lack of endurance, he hasn’t been able to sustain it for long periods of time. He does have a strong core and can beat most opponents one on one. It helps when he’s 88 kilograms and already has the body of an AFL footballer. While he might not do too much damage disposal-wise, he will rake in the turnovers either directly or indirectly through the pressure he puts on his opposition.

For someone of just 186 centimetres, Maynard has vice-grips for hands and clunks marks not too dissimilar to Jack Billings, although probably not quite at that level. He will beat his direct opponent in a marking contest more often that not and against a taller opponent, can beat them on the ground in a foot race. While he doesn’t have elite speed, it would be well above average and considering his other strengths, it certainly comes in handy.

Maynard’s draft stocks have risen in the past 12 months after an impressive under 18 Championships and solid season with the Sandringham Dragons. Much like another small forward in Zach Merrett last year, Maynard could end up drifting somewhere in the second or third round depending on the needs of clubs.

Maynard’s main area of improvement is his endurance. While many clubs might see him as a future midfielder, as it stands he’ll only spend stints in there until he can build his tank. In AFL terms, he may well be the substitute for a number of games so he can come on and make an impact.

If Maynard can improve his endurance and raise his kicking a little bit more, he’ll be a very decent AFL player. He might not win league awards, but he’s the kind of player that would be high up in best and fairest’s for doing the team thing and meeting his key performance indicators.

Brayden Maynard should find himself an AFL club in the first half of the draft, but if not then he should still go late and a club could pick him up for a bargain base price.