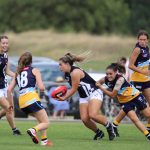 ROUND 3 of the 2021 NAB League Girls season saw the Geelong Falcons, Eastern Ranges, and Oakleigh Chargers go two-from-two in this year’s competition, firming as early frontrunners. Players hit the ground running after a week away due to the postponement of Round 2, though four of the six fixtures were decided by over six goals. We take you through all the weekend’s action from what was an exciting return to elite pathways football.

Oakleigh Chargers came out on top in a battle of premiership contenders, kicking away from the Calder Cannons during an inspired final term to salute by 16 points. The wind favoured Calder in the fourth quarter, who looked primed to ride out a tense win as scores were tied at three quarter time, but the Chargers took full toll with an irresistible surge to stamp themselves as a bonafide flag threat. Now 2-0, they sit second and boast a number of draftable prospects currently taking the league by storm.

Outside midfielder Stella Reid was crucial in helping Oakleigh establish an early foothold, booting two goals in the first half before finishing as the game’s leading ball winner. Charlie Rowbottom, Amanda Ling, and Eliza James contributed some strong work at the stoppages, with the latter also snagging a crucial late major. Brooke Vickers was also terrific off half-back and Ameile Smith competed well as a slightly undersized ruck/key forward.

The midfield trio of Georgie Prespakis, Emelia Yassir, and Zali Friswell was also impactful for Calder, as they all lifted at important times to give the Cannons a fighting chance. Charlotte Clayton booted two opportunistic goals while stationed deep inside 50 as Tahlia Gillard also proved dangerous when rotated from the ruck, while Kasey Lennox tried hard alongside Neve Crowley in defence and Olivia Manfre put her hand up in the loss.

The Cannons will look to reload and fire again when they take on the Bendigo Pioneers in a tough road trip, while Oakleigh is booked for a meeting with Tasmania on the Apple Isle in Round 4.

Two Round 1 winners headed north up to Epsom Huntly Recreation Reserve to face off in warm conditions, which organisers allowed for by moving the game half an hour earlier to 10am. It was the visitors who raced off to a dominant start through Renee Tierney and Zoe Garth (two goals), and never really looked back. The Pioneers had a good second quarter thanks to goals from Jemma Finning and Charli Dorrity, but the Falcons maintained control in the second half, booting four goals to zero to run out comfortable 50-point winners on the road.

Tierney was a huge turning point for the Falcons with her four goals and setting up another few, while defenders Annie Lee and Elizabeth Dowling were again consistent. Through the midifield Tess Craven and Poppy Schaap did the bulk of the heavy lifting in a team effort, while Gabbi Featherston had multiple shots on goal and looked damaging every time she went near it. For the Pioneers, future stars in Tegan Williams and Lila Keck really stood out, while Elizabeth Snell and Jayda Richardson were again consistent across the match roaming hard and covering ground.

Eastern Ranges sent a message to the rest of the NAB League Girls competition after flexing their muscles during a 19.3 (117) to 0.3 (3) romp of Gippsland Power. The huge win broke the all-time high score and winning margin records, with 12 individual goalkickers contributing 19 goals for the match. Their accuracy of 19 majors from just 22 shots also helped their case, and while the Power did manage to contain them to three goals in the second and fourth quarters, could not manage to put through a major themselves on the day.

Alyssia Pisano was best on ground with four majors in the match, while Georgia Campbell took control of the ruck for Eastern, and then went forward to deliver three majors too. The midfield pair of Bridget Deed and Olivia Meagher was ticking over, while Georgia Wilson (two) goals, Isabelle Khoury and Matilda Hardy were all prominent on the scoring front. For the Power, Matilda Van Berkel put in a four quarter effort from defence, combining well with Courtney Fletcher back there, while Sunday Brisbane and Yasmin Duursma won their fair share of the ball despite the defeat.

A three-goal third quarter saw the Dandenong Stingrays win by 10 points in their first game of the year over an improved Western Jets outfit at Bluescope Recreation Centre. Dandenong’s inaccuracy in the first term saw Western remain within striking distance, even taking the lead by two points at half time. But the third quarter saw the Stingrays drift away from the Jets, with the latter unable to get the difference back as the game finished 6.6 (42) to 5.2 (32) in Dandenong’s favour.

2022 draft eligible trio Montana Ham (Western), Emily Shepherd and Amber Clarke (Dandenong) led the goalkicking with two apiece, with Ham getting both of hers playing as a forward target in the last quarter. The trio was also highly influential through the midfield throughout the day, with Abbey Jordan and Charley Ryan also working hard for the Stingrays in the engine room. Laura Elliott and Jaide Anthony were two standouts in their respective teams’ defences for the day, with Elliott showing off her ability to read the ball in flight and position herself to cut off Dandenong attacks, and Anthony doing similarly down the other end, sweeping up any dropped marks and rebounding quickly.

Next week sees the Stingrays hit the road to face GWV Rebels at MARS Stadium, whilst the Jets head to Cathedral College in Wangaratta to take on the Murray Bushrangers.

Greater Western Victoria (GWV) Rebels stormed to a dominant, high-scoring win over Murray Bushrangers to bounce back from a narrow Round 1 defeat at the hands of the Geelong Falcons. Both teams were no doubt feeling the heat at Epsom Huntly, but both played with a fierce brand of football. The Rebels got off to a fast start and never looked back, piling on seven goals to two by half-time. The Bushrangers managed to arrest the momentum somewhat and make it more of an even contest after the main break, though some late majors to the Rebels blew the margin out to 44 points by the final siren.

Paige Scott stood out with three important goals up forward, while Nyakoat Dojiok was simply sensational after quarter time. Her work around the stoppages and teaming up with Lilli Condon and Crystal Summers really made life difficult for the Bushrangers. Ella Friend looked lively at ground level this week after a dominant marking effort the week before, while Chloe Leonard was again consistent for the winners. Aurora Smith and Keeley Skepper were the dominant players through the midfield for the Bushrangers, while Molly Kennedy did well one-on-one against Friend, and Ally Morphett provided a target up forward while also rolling through the ruck.

A composed and determined Northern Knights came out 37-point winners over the Sandringham Dragons at Trevor Barker Oval on Sunday, with a four-goal first quarter setting up the high-level team performance. The Dragons had their opportunities throughout the day but were unfortunately inaccurate in front of goal, with the Knights defenders able to move the short dropping balls out of defence quickly and seeing out the 10.6 (66) to 4.5 (29) result.

Maeve Chaplin was the standout performer for the Knights, leading the way in the midfield with her relentless hunt for the footy which the Dragons just did not have any answers for. She was well assisted by Ava Jordan who showed composure with the ball throughout, setting up team mate Megan Girolami for one of her game-high three goals. The Dragons still showed plenty of fight through the likes of 2022 draft eligible Keely Coyne and Sofia Hurley, who did hard work around the ground, and Ebony Angelopoulos who snared two of her own goals.

The Knights will be looking to make it two on the trot when they come up against Gippsland Power at Churchill Football Ground next round, whilst Sandringham will have time to recoup with a bye before it faces Gippsland in Churchill the following week.