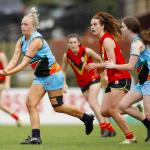 RETURNING for her second season of Tasmania Devils representation in 2021, there was a rise in “enjoyment” levels for tough midfielder-forward, Ella Maurer. The 19-year-old thrived across nine NAB League outings in her top-age campaign, averaging a tick under 17 disposals and five tackles as an integral part of the starting squad. She put much of her own, and the team’s success down to a rising “team bond”.

“We’ve really come together,” Maurer said. “We’ve been really united and it’s just been really enjoyable. Sometimes in previous years I found that it was a big sluggish getting to training but this year every training was enjoyable. All the coaches, staff and girls were great to be around.

“I love team sports, just the whole vibe and being out there with the girls.”

Through a consistent and much-improved NAB League campaign, Maurer was able to bring her own strengths to the fore and lean on her senior experience to provide a hard edge. She’s a player who loves the “aggression” of the game, which shows in the traits she says are her strengths, and areas for improvement.

“[My strength] is probably my attack on the ball,” she said. “Just being able to get in and get the ball out from contests and get the hands off to a teammate… [I’m working on] being cleaner and my skills, especially when I go down forward.

“I love to play in the midfield and rotate forward, I love to play down there as well. Even in the backline, I like to play some defensive footy so a bit of everything really.”

Maurer’s 2021 form saw her selected in the Allies squad, where she remained a constant ball winner and tough competitor, averaging 18 disposals, six tackles, and three clearances per her three games. The representative honours matched Maurer’s goals constantly “improving [her] game” and playing “at the highest level” possible.

She has plenty of examples to follow too, with former North Launceston captain Jodie Clifford a particular source of inspiration for the rising teenage prospect, having been there almost every step of the way.

“[Clifford] is just a really inspiring person and player as well,” Maurer said. “She’s one of the coaches for the Devils, the midfield coach, and I got to play footy with her at North Launceston. She was our captain and best and fairest both years that we played together.”

“I started playing footy when I was 14 in the junior youth girl’s team at North Launceston Football Club. I played there for two years, then went on to play in the TSLW team for North Launceston for the two years we had that. Unfortunately that folded so now I’m at Old Scotch in the NTFA.”

A raft of Tasmanians also joined Maurer in North Melbourne’s VFLW side this year, with as many as 11 of them getting out on the park at one time in blue and white. There are certainly big things happening out of the Apple Isle and if Maurer’s development is anything to go by, the rate of improvement will be steep.