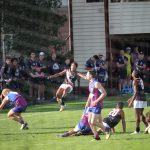 ROUND 9 of the Northern Territory Football League (NTFL) Men’s Premier League bounces down under Friday night lights, before a super Saturday poises top five teams Nightcliff and Tiwi against each other in what shapes as the game of the weekend.

The Darwin Buffaloes will look to press on with their top two charge when they travel to take on the winless Palmerston Magpies under Friday night lights. A big win over Waratah last time out means Darwin comes into this clash with consecutive victories, eyeing off a top two berth as just eight points split second and sixth. With Palmerston languishing in last and without a win to this point, this is the kind of game the Buffs’ simply must win if they are to remain a premiership contender. Joe Anderson is one of the only movers in a settled Darwin line-up, named in defence as the likes of Darren Shillabeer, Brodie Foster, and Matt Campbell take up forward 50 spots. Speaking of, Alwyn Davey sneaks into Palmerston’s forward pocket, hoping to add class on the full forward line alongside Ezekiel Frank and Keidan Holt-Tubbs, while Nigel Lockyer Jnr has been named on the bench. The Magpies will be hoping to rectify some poor previous form in front of a home crowd, but the Buffs are always tough opposition and have found a rhythm once again.

Two of the NTFL’s form sides meet on Saturday afternoon as Nightcliff and Tiwi do battle at PSC BM Oval, with finals implications in play. The Tigers continue to set the competition benchmark despite slipping up a couple of weeks ago against St Mary’s, and inadvertently helped Tiwi jump into fifth place with a big win over Wanderers in Round 8. The Bombers claimed a handy win of their own in the same weekend, trumping the Saints for a second time this season to make for an interesting equation of football maths in this fixture. Something that needs no working out is that Nightcliff’s side is omnipotent, with former-Williamstown duo Willie Wheeler and Leigh Masters continuing their NTFL stint, adding to the goal threat posed by Cam Ilett, Trent Melville, and Liam Holt-Fitz. The Bombers will hope to outgun their opponents though, naming Adam Tipungwuti up forward alongside Austin Wonaeamirri and Ross Tungatalum, while still possessing plenty of drive up the field. It shapes as being the game of the round, and a win for Tiwi would keep the minor premiership race interesting.

The opportunity to bounce back from disappointing respective losses is up for grabs for both St Mary’s and Waratah as they meet at TIO Stadium on Saturday afternoon. The Saints endured a second upset defeat at the hands of traditional rival, Tiwi last time out, but remain in the top two hunt on the back of a much-improved start to the season. Waratah’s year to date has been a touch more hit-and-miss, and the Warriors were outclassed by Darwin after a couple of strong showings helped them break through for consecutive wins – their only ones for the season. Maurice Rioli Jnr is the most exciting inclusion among a star-studded Saints line-up, named on the bench while David Armitage and Michael Manteit make up the ex-AFL numbers. Meanwhile, Steven Stroobants is a handy addition for the Warriors to add to the firepower Kim Kantilla brings, but they look like going in without Abe Ankers in a huge blow to their chances. St Mary’s has looked formidable on paper all season, and that is no different this week as they look to prey on a bottom three opponent.

Wanderers will hope to snap a two-game losing run when it closes out the round against Southern Districts on Saturday night at TIO Stadium. Both sides have endured wild momentum swings in their seasons thus far, but the Crocs have found a way to win more often and sit pretty in second spot. They would be even closer to the top had it not been for a draw in the first meeting between these two teams, with the result also a factor in Wanderers’ position just outside of the top five. With Tiwi on the up and the top four relatively settled, a win is crucial for the young Muk Muks line-up. They will have to perform without star swingman Joel Jeffrey this week, with NT Under-16 Mark White coming into the forward line to join Beau O’Connell and Davin Ferreira. The Crocs will back in their own forward firepower, with Ed Barlow named inside 50 alongside Beau Schwarze and Will Farrer, while Richard Tambling is also set to go around again. Those names make Southern Districts hard to pass up, but Wanderers can cause plenty of headaches.