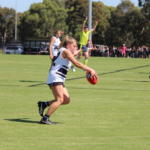 THE PATH less travelled by is a phrase often attached to the journey of budding AFL Women’s draftees. Well, how does Perth, to Singapore, to America, to Melbourne sound?

That’s the journey Northern Knights prospect Ashleigh Snow has embarked on throughout her young life, with an AFLW club potentially the next destination. The diminutive defender-turned-midfielder learned to play football through a school program during her seven years in Singapore, and says she “always wanted to play” having watched her brother and dad do the same.

“I went to an Aussie school, so they had a little program where I learned to play,” Snow said. “My brother and dad played so I just always wanted to play. I played there for two years and then came back to Melbourne and that’s where I joined my first girl’s team at West Preston.”

Snow entered the Northern Knights through its development program, before turning out six times throughout the region’s undefeated premiership season in 2019, and thrice more in 2020. Though injury kept her out of last year’s Grand Final team, Snow came back strongly as a top-ager.

Her form was enough to warrant a National Combine invite, something which Snow says was “unexpected” following the cancellation of this year’s NAB League season.

“In the year that Knights won the NAB League premiership, I missed out because of my injury which was a bit hard,” she said. “I went back this year and only got to play the three games, but I feel like I came back pretty (strongly) and got to show what I could do in those games.”

“I started playing midfield which was a bit different because I played (in the) backline for the last two years before that. I feel like I seemed pretty determined and was always going hard for the ball. In one of the games I even got a goal against Calder, which is a bit different for me, always being down back.”

“The draft, being invited to the combine, and having the interviews was actually really unexpected for me. I just thought ‘the season’s over and that’s it’. “But luckily enough I have a little gym in my garage so I’ve been doing circuits every day to keep my fitness up. So hopefully if I do get drafted I’ll be in alright shape for preseason.”

Lauded for her tenacity and toughness at the ball despite her size, Snow’s importance to the team has long been known to those who can see past the conveyer belt of stars Northern has produced of late. She comes from good pedigree as well, with her father, David a former WAFL footballer and 1996 Simpson Medal winner. The ‘daughter-of’ says her dad has long been one of her greatest motivators, along with outgoing Knights coach Marcus Abney-Hastings.

“My dad has a massive footy background and I just have to say, he’s the one person who’s non-stop motivating me,” she said. (He is) always asking me to go for runs, do workouts with him, and wanting to go for kicks. “When I don’t want to do any of that he’ll keep pushing me and he knows that in the long run I’ll be thankful that he made me do it.”

“Marcus has been the coach for the whole three years I’ve been (at Northern). I really like him and feel like he’s been the most supportive…  obviously all the coaches as Knights like Marcus and Nat Grindal, they’ve been a massive help. “They’ve always made me keep belief in myself and given me the confidence that I sort of struggle to have.”

The Knights’ affiliation with Carlton’s AFLW side saw Snow choose the Blues as her favourite women’s side, though her upbringing in Perth meant she grew up a West Coast Eagles fan. Heading into the draft, Snow says she will be watching alongside her family and boyfriend at home amid Melbourne’s lockdown, hoping to hear her name called out.

“My parents and friends (have) always supported me in life. My boyfriend I think is my number one fan, he’s proudest out of everyone,” she said.

The 2020 AFL Women’s Draft will be held virtually at 7pm AEDT on October 6. 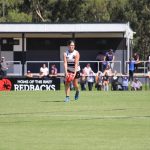 HER coaches know it, her teammates know it, anyone who has observed her journey through the NAB League pathway knows it, but only now is Maeve Chaplin realising that she truly belongs among the best women’s football has to offer.

The Northern Knights defender has come a long way since starting football at age seven; originally playing alongside boys, then moving to girl’s sides at West Preston Lakeside and the Darebin Falcons, while also advancing through Northern’s elite talent program.

As a middle-ager, Chaplin was part of the Knights’ undefeated premiership team, shining across half-back with her mix of physicality and class on the ball. An injury in Round 3 of her top-age campaign was unideal, though it would matter little in the grand scheme of things as the season would eventually be scrapped amid a global pandemic.

By her own estimation, Chaplin was “travelling pretty well” and was as fit as she had ever been. She was in the midst of a move into the midfield, joining co-captains Ellie McKenzie and Jess Fitzgerald at the centre bounces and waxing well with the probable first-round draft talents.

While the 18-year-old and her teammates may have had plenty more to give in 2020, Chaplin says the break in play has allowed her to work on the mental side of her game.

“I definitely tried to use (the lockdown period) to my advantage and I really worked on myself mentally,” Chaplin said. “It was a big thing for me because I didn’t really have the time like I do now to just focus on myself. “It was a time for me to understand that I really do want to get far in footy and that I am prepared to play at a professional level. “In order to do that I really wanted to mature in those areas.

“I just wish I did believe in myself… but it’s something that I really want to work on and I have been working on throughout this isolation period. Just knowing mentally that I am good enough and I can get to that next level, it’s just all about pushing myself.”

The friendship of a Knight-turned-Bulldog who has also been part of the Darebin football family, Nell Morris-Dalton has helped Chaplin thrive. Chaplin says she has remained in constant contact with her former teammate throughout the lockdown period.

“A big (mentor) for me has definitely been Nell,” she said. She’s really helped, inspired, and guided me a lot throughout the season because we’ve got the same personality in a way. “I’ve been texting her quite a bit during isolation so she’s a really good friend.

“It’s pretty amazing to play with (the Northern Knights), they’re all so talented. “You really grow off each other and challenge each other, so it helps everyone get better at the end of the day. “Playing with them, you don’t really think about how good they are, they’re just more your friends.”

Northern’s cohesive team and a family-like atmosphere has certainly played a part in Chaplin’s rise. The aforementioned midfield move was one bought on by coach Marcus Abney-Hastings and talent manager Nat Grindal, allowing Chaplin to bring her defensive nous to a rather potent midfield group.

She says the move was somewhat of a natural progression from the defensive post she owned throughout 2019, though she still harbours hope of returning to half-back in future.

“It was kind of expected,” she said. “Nat and Marcus let me know that they were going to put me up into the midfield and get me a bit more of the ball which was good to have.

“I definitely brought some of my defensive traits into the midfield, using my bodywork, so that was a bonus. “I felt like in doing that, I helped Ellie and Jess play their best footy as well. “It was definitely a good move up the ground, it was fun.

“I would prefer to play on the half-back flank (at AFLW level) but playing in the midfield does come naturally to me just as much as the backline. “But I’ll obviously put my best effort in playing there and it’d be a really good opportunity.”

The versatile prospect, who models her game on Richmond defender Phoebe Monahan, has not only improved herself off-field, but has reaffirmed some of the improvements to be made through contact with AFLW clubs. While “feeding off” their directive, Chaplin has also put the onus back on the recruiters and coaches during their meetings.

“They have given me some things that I need to work on, or they’ve mentioned them and I’ve fed off them a little bit,” she said. “But I’ve been more self-directing, I’ve just told them what I feel like I need to work on and ask them how they’re going to support me and all that kind of stuff.”

“Obviously there’s a few things (to improve on). My aerobic endurance I definitely want to work on, I want to be the fittest that I can be because that was definitely me at the start of the year. “With the right support staff I can definitely get to that level again and even better than that.

“A few other things that I really want to work on are just my mentality, that’s a big thing for me. Just knowing that I am at that level physically to play, and getting myself there mentally as well.”

Outside of football, Chaplin is working through her Year 12 studies and hopes to move into either nursing or paramedicine next year. She sought to thank all the people at the Northern Knights for all the support and life lessons she has received from them, as well as her teammates Fitzgerald, McKenzie, Alyssa Bannan, Ash Snow, and Abigail Bennett.

“They’re all just really good teammates, I really love them.”