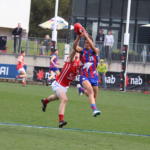 Next under the microscope in our AFL Draft watch is highly-touted Oakleigh Chargers key forward Jamarra Ugle-Hagan, who is a prime candidate to be taken first off the board come draft time after a stellar bottom-aged season. The Warrnambool native represents Vic Country despite his current zoning in Oakleigh’s system via boarding at Scotch College, and will be well sought after despite his ties to the Western Bulldogs as a Next Generation Academy (NGA) product. The 194cm prospect returned elite numbers at the pre-season testing day, showing off an elite vertical leap off both feet while also registering under the three-second mark over 20 metres and over 21 in the yo-yo test. A star athlete across the board, Ugle-Hagan has the raw potential to be anything at the next level.

“It’s actually been a really good experience with all the other clubs, you can just see your competition which is pretty good.”

“Jamarra’s just Jamarra, he’s a fantastic leader and obviously works really hard. “There’s a lot going on this year, obviously these boys are NGA eligible, they’re training with their AFL clubs, they’re training in their respective hubs and they’ve both got school for Scotch (College) and they’ve got the Chargers program. “We’re just monitoring their workloads and their wellbeing and we’ll know that they’ll play great footy for us and we’re really excited that they’re in our program”

It was a promising display from the Bulldogs NGA product, played out of position for the most part at centre half-back. He started off on his usual leads up forward but soon slotted in behind the ball and did well to leap at whatever came his way. He was terrific at the drop of the ball in the third term with his athleticism, and would have been a really effective player had he stuck more of his kicks on the run.

Worked hard throughout the game on his way to three behinds from 10 disposals and eight marks and worked up the ground to present and produce six inside 50s as well… Ugle-Hagan took a towering mark early and gave spectators a reason to see why he is so highly rated for next year.

Another dominant outing from the 2020 draft prospect who is tied to the Western Bulldogs’ NGA. The talented athlete was again the clear standout key forward with his speed off the lead and marking power too much for Sandringham to handle. Ugle-Hagan had a great start taking two great lead up marks an converting both set shots but his best goal came in the third quarter marking deep in the pocket and kicking a sensational goal right on the siren.

His lead up marking was superb with every one sticking and he kicked two nice goals and even passed another off unselfishly. He would show again he was not just a lead up and mark player with a great chase down tackle in the last quarter, converting the set shot to reward his effort. The bottom age talent could have had an even bigger day if he had kicked straight, going on to collect 13 disposals, six marks and kicking 3.3 with a few kicks going out on the full as well.

Round 10 vs. Calder Cannons

Had an impressive game, contested the ball hard and was good at ground level. Nailed an impressive goal off a couple of steps and working his way through traffic, showcasing his clever goal sense and long booming kick. That goal was closely followed by another major credit to his hard running, clever lead and strong hands to take a good mark in the forward 50 and convert… ended the game with five goals and proved to be a real dangerous prospect in the forward 50.