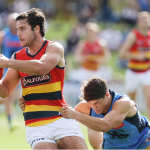 AS the weekend came to an end, so did a round of exciting football around the country. State leagues saw plenty of contests that came down to the wire, while other teams flexed their muscles with big wins.

VFL action kicked off on Thursday night with the Casey Demons’ big win over North Melbourne as VFL finally returned to Marvel Stadium. The Demons kicked a whopping 19 goals and finished the game as 107-point winners in a game that would not have impressed North Melbourne fans. Sam Weideman kicked four goals as he continues his ripping form that is sure to earn him an AFL recall in the near future. Unfortunately for him, Casey’s AFL affiliate Melbourne is absolutely flying at the moment, but if the key forward keeps up these performances, he will be hard to ignore come selection time. For the Roos, ruckman Tristian Xerri fought hard, and won the duel with Casey’s rucks, collecting 16 disposals to go with his 35 hitouts.

Collingwood stole a victory at the death as they snuck away with a three-point win against the Gold Coast Suns at Olympic Park Oval on Friday afternoon. With his 20th disposal, Magpie Reef McInnes kicked a goal at the 26-minute mark of the final term to put his side in front, and the rest is history. Young Pie Oliver Henry’s three goal haul would have impressed coaches, while Sun Will Brodie dominated in the midfield, collecting 41 touches and laying 11 tackles.

Geelong held off a fast-finishing Sydney side to claim a tense four-point win at Tramway Oval on Saturday afternoon. The Swans led by three points heading into the final term but Logan McDonald’s three goal effort was not enough to get the Swans home. Charlie Constable found the ball 28 times in a promising display, while Josh Jenkins booted two goals. For the Swans, Lewis Taylor and Robbie Fox combined for 59 disposals and looked dangerous whenever the ball was in dispute.

Essendon’s fast start couldn’t be maintained, eventually falling to Carlton by 49 points at Windy Hill on Sunday afternoon. The Bombers led by 14 points at the first break, but a five goal to nil second term got the Blues in front, and they never looked back. Out of favour Blue Will Setterfield continued his strong VFL form with a 26 disposal effort as he continues to push for a recall, while Nic Newman returned from a serious knee injury sustained last year to gather 23 disposals in a promising outing for Blues fans. First game Don Nick O’Kearney gathered 36 disposals in an eye-catching performance.

Round 5 of the SANFL began with an upset, as Norwood took down the previously undefeated South Adelaide Panthers at Coopers Stadium on Friday night. The Redlegs kicked a whopping five goals to one in the second goal to give themselves a 26-point lead at half time, and the Panthers simply couldn’t get the comeback done in time. Norwood midfielders Matthew Nunn and Jacob Kennerley combined for a whopping 29 tackles with 16 and 13 respectively, while former Crow Richard Douglas racked up 30 disposals. Joseph Haines was the Panthers’ best with 28 touches.

Glenelg remain the best team in the competition after their 31-point triumph over the North Adelaide Roosters on Saturday afternoon at Prospect Oval. A four-goal lead at quarter time was a sign of things to come, as Glenelg rode the first quarter effort until the final siren. Former Tiger Liam McBean kicked a bag of five of Glenelg, while midfielder Luke Partington had 35 disposals and seven clearances. Thomas Schwarz kicked three goals for the Roosters.

A strong final term saw West Adelaide claim their second win of the season, taking down Central Districts by four goals at Hisense Stadium on Saturday afternoon. There were only four points separating the two sides at three quarter time, but West Adelaide were able to extend that lead after kicking four goals to none in the final term. Edward Allan was strong in the midfield for North Adelaide, finishing with 22 disposals, five clearances and 11 tackles, while teammate Thomas Keough kicked four snags. For Central Districts, Justin Hoskin’s 26 disposals and two goals were excellent.

Over at Unley Oval, Sturt were able to pull off a heist, stealing a one-point win from the Crows on Sunday afternoon. Sturt’s Ashley Johnson kicked his fourth goal 26 minutes into the final quarter to give his side a one-point lead that proved to be enough. He was well aided by teammate Albania Davis who had 33 disposals, 11 marks and a goal. Crows skipper Matthew Wright kicked three goals in what could have been a match-winning performance.

Port Adelaide’s ten goal win over the West-Woodville Torrens was set up by a clinical second quarter performance at Alberton Oval on Sunday afternoon. The Power kicked seven goals in the second quarter to take a 47-point lead into half time, which they only improved on in the second half. Port’s skipper Cam Sutcliffe was marvellous rotating through the midfield and forward line, finishing with 25 disposals and three goals, while Tom Rockliff had 34 touches and eight clearances. Eagles mid James Tsitas had a whopping 39 disposals for the losing side.

In the WAFL, Round 5 kicked off with Swan Districts surviving a massive scare from an East Perth side who are still searching for their first win. The inaccuracy of East Perth really hurt their chances, kicking 7.13, while Swan Districts kicked 10.8 to run out 13-point victors for their third win of the season. Swan Districts midfielder Samuel Fisher had the ball on a string as he worked his way to 37 disposals and a goal, while teammate Frank Anderson had 35 touches of his own. Edward Simpson was nearly the hero for East Perth, booting five goals in a near match-winning performance.

Perth were able to cruise to their second win of the season with a triumph over East Fremantle by five goals at New Choice Homes Park on Saturday afternoon. A six-goal opening term set up the win, with the home side unable to close the gap in the next three quarters. Brady Grey was the star for the victors, with 29 disposals and a huge 10 inside 50’s for the match, while Doultan Langlands kicked three goals. For East Fremantle, Cameron Eardley led the way with 32 touches.

Despite a slow start, Claremont were able to find their rhythm in the second quarter, steamrolling their way to a 52-point win over West Perth at Revo Fitness Stadium on Saturday afternoon. Claremont trailed by two goals at quarter time, before kicking six goals in the second term to get the game back in their control. Claremont’s Lachlan Martinis racked up a whopping 42 disposals and nine marks in a dominant display, while Jack Buller kicked five goals for the victors. For West Perth, Shane Nelson had 39 disposals in an impressive display.

South Fremantle caused a major upset with their 18-point win over Subiaco, handing them their first loss of the year at Fremantle Community Bank Oval on Saturday afternoon. Subiaco were at the top of the table heading into this game, while South Fremantle had only won the two games, but they turned the table in this dominant display, set up by their seven goal second term. Haiden Schloithe put in a star turn for the winners, ending the match with 39 disposals and two goals in a clear best on ground performance. For Subiaco, Gregory Clark led with 30 touches.

West Coast’s struggles continued on Sunday morning after being convincingly beaten by Peel Thunder to the tune of 79 points at David Grays Arena. The Eagles trailed by seven goals at half time, and could not get themselves back in the game against a dominant Thunder side. Blair Bell kicked six goals for Peel, while teammate Josh Treacy kicked five of his own. West Coast’s Hamish Brayshaw performed admirably with 29 disposals.

QAFL’s fifth round of action kicked off with a blockbuster as Labrador upset Maroochydore by 12 points at Maroochydore Multisports Complex on Saturday afternoon. Labrador had one less win than the home side heading into this clash, but a strong third term saw the visitors take a lead that they would end up holding for the remainder of the game. Labrador’s Pearce Hanley once again claimed best on ground honours, running riot through the midfield as he continues to show that age will not slow him down. For Maroochydore, Jacob Simpson fought hard all day to be his side’s best.

Redland-Victoria Point cruised their way to their third win for the year against Mt Gravatt on Saturday afternoon at Southside Toyota Oval. Redland-Victoria Point jumped to an early lead in the first quarter and then only extended their control from there, waltzing to a crucial win that keeps them well in the hunt for top spot on the ladder. Redland-Victoria Point full back Mitchell Stallard was named his side’s best after a dominant display in defence. Gavin Grose was Mt Gravatt’s best for the second week in a row.

Sherwood Districts have finally found their first win for the season, defeating bottom-placed Noosa by 22 points at Rococo Oval on Saturday afternoon. Noosa remain winless, but Sherwood Districts will be hoping this is the triumph that kick starts their season. For the winners, Joshua Coombes led the way with three goals up forward, but it was truly a team effort that delivered the win. For Noosa, Ryley Buntain was his side’s best for the second consecutive week.

A bag of seven goals from forward John Anthony has led Palm Beach Currumbin to an important win over Wilston Grange at Salk Oval on Saturday afternoon. Anthony’s bag of seven was inspiring and proved crucial to Palm Beach Currumbin securing their second win of the season, shooting them up the ladder. Anthony was his side’s best, but had plenty of help from teammate Matthew Gahan. For Wilston Grange, Isaac Corvo was a clear standout.

Broadbeach kept their unbeaten streak rolling with their fourth win of the year, defeating a brave Surfers Paradise side by 10 points at Subaru Oval on Sunday afternoon. A close game all day, Broadbeach kicked three final quarter goals to seal the game to hold off the upset. For the winners, Liam Nelson was the star, leading his side all day in a best afield display, while Alby Jones was the bright spark for Surfers Paradise.

TSL action resumed this weekend, as Clarence continued their hot streak, knocking off the Tigers at Kingston Twin Ovals on Saturday afternoon. The victors led all afternoon, and never looked like giving up the lead on their way to recording their third win of the season. For Clarence, Oliver Davis was best on ground for the second week in a row. For the Tigers, Blake McCulloch stood out through the backline to end the day as his side’s best.

North Hobart have recorded their first win for the 2021 season, kicking away in the last quarter to defeat Lauderdale by 18 points at Lauderdale Oval on Saturday afternoon. There was two points separating the sides heading into the last quarter, but North Hobart were too strong, kicking four final quarter goals on their way to a maiden win for the year. For the victors, Thomas Liefhebber was outstanding all day, while Jye Menzie kicked four goals. For Lauderdale, Alex Hevey never gave up and performed admirably.

Launceston continue to uphold their status as league powerhouse, demolishing Glenorchy by 148 points at Windsor Park on Saturday Oval. Launceston hit the 100-point mark by half time, and Glenorchy never stood a chance against this well-oiled machine. Launceston star forward Dylan Riley backed up his 10-goal haul last week with a nine-goal effort this round, putting emphasis on the importance of shutting him down. For Glenorchy, Nick Reibelt impressed despite the loss.