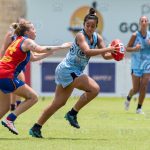 THE Northern Territory Football League (NTFL) Women’s Premier League season resumed over the weekend following the Christmas break, with a huge round of action recommencing and seeing the top sides remain in charge of the 2020/21 ladder. Waratah was granted an extra week off thanks to the bye and Pint continued its winning streak with a twelfth straight win on the board, while St Mary’s and Darwin Buffettes continue to hold ground in second and third, respectively, with fourth place Southern Districts continuing its rise up the ladder adding another four points to their tally. All that, and more in our weekly wrap.

Darwin Buffettes got off the perfect start opening the round, with a huge 151-point victory putting the side in an excellent position heading into the latter stage of the season. While the massive win did come against the lowly Tracy Village, who are yet to win a game this season and have had little scoring opportunities, the Buffettes more than proved once again that they are one of the teams to beat this season with a plethora of key options around the ground who can take control and command the footy. The tough match saw Tracy Village once again rendered scoreless, with no bests named, while the Buffs also are yet to name their best on ground. That being said, there is no doubt Ashanti Bush had a huge impact on proceedings with a whopping seven goals to her name, aided by the likes of Melinda Taylor and Talia Corrie who booted three apiece and Michelle Sliwinski (two), with seven more single goalkickers also on the board. While the Buffs were not at their most accurate in this win, it was more than enough to prove the side will be a tough contender heading into the last few rounds of the 2020/21 season.

Ladder leaders Pint continued their excellent form with another straight win on the board, with three goalless quarters from the Tigers testament to not only the scoring ability of the Queen Ants – who booted three goals in each quarter – but also the defensive pressure the side continuously applies week in week out. While Nightcliff certainly brought some hunger, it was not enough to really test the top side, who saw their reliable core group of players step up as per usual with four multiple goalkickers in Jessie Baumer, Jasmyn Hewett, Reni Hicks and Claudia Fabris, two of whom were also named amongst the best alongside Hillary Grubb, Casey Morris and Amy Chittick. For Nightcliff, the two final quarter goals came from Amy Pittman and Lauren Gooden, with Pittman named amongst the best with Emily Casey and Eliza Morrison. Pint’s consistency is what makes them so threatening at the moment, leaving sides unable to penetrate their defence or maintain control of the footy.

It was too little to late for the Magpies in this matchup against second-placed St Mary’s, with the side applying tough defensive pressure in the second half but ultimately unable to stop an early rampage from St Mary’s. An excellent first half from the Saints was enough to control proceedings with seven goals to two, though inaccuracy seemed to plague the usually reliable side in the second half with 2.4 recorded as the Magpies switched on the afterburners. The 41-point buffer was more than enough to maintain second on the ladder though, with seven goalkickers plying their trade out the front and both Jasmine Anderson and Laelia Dunn booting two apiece thanks to the work rate of Shailyn Doreen Peris and J’Noemi Anderson, who were both named in the bests. For the Magpies, Georgina Garling booted two, aided by Nadine Braun who slotted the side’s third goal while Tabitha May, Iesha Ronberg and Billie Byers proved crucial as ever.

The closest match of the round saw a great challenge from the Wanderers as they pressured the ever-improving Districts outfit, however it was just not enough in this encounter with the Crocs maintaining control and running out 17-point victors. While the Wanderers grabbed an early lead, kicking two straight goals in the first term, the Crocs had more scoring opportunities and capitalised on their missed chances as the second term rolled in. A highly defensive and competitive third quarter saw neither side really gain control, with both sides adding to their respective tallies in the final quarter and seeing the Crocs remain in front. While Districts are yet to release goalkickers and bests, Wanderers’ ever reliable Kaitlyn Armstrong continued her impressive form with another three goals to her name, named in the best alongside Sophia Mauboy and Cassie Ormsby.