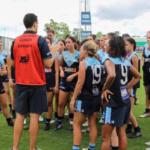 WARATAH will be looking to extend their reign at top of the ladder with another strong performance while the Southern Districts will be wanting to keep in touch with the top four. It has been a trying season for the Big River Hawks who are yet to register a win but if they can muster up enough will power could give the seventh placed Nightcliff a run for their money.

Nightcliff will look to go for two wins in a row this round when it takes on the winless Big River Hawks. The side will be brimming with confidence after beating Southern Districts in a close encounter in Round 8 so are sure to go in hard to every contest this week to take their winning tally to five and hopefully move up the ladder in the process. For the Hawks, one thing they will have going for them is Nightcliff’s form in recent seasons, with consistency a real issue for the Tigers despite their good form to start the season. Youngster Shantel Miskin-Ripia has been in stellar form lighting up the field with her daring style of play for Nightcliff. Miskin-Ripia has been named in the “bests” for the past three weeks highlighting her dominance while teammate Michaela Ward is renowned for her ability to hit the scoreboard. Jade De Melo made a splash in her first game for the season and will be hoping to continue that form while River Hawks duo Sam Clarke and Zainab Mohamud have lifted their load in the past couple of matches.

Darwin Buffettes will look to bounce back from a rough few weeks on the track, losing to Wanderers and Waratah in successive rounds to lose their undefeated status and top spot on the ladder. Two consecutive two-point losses are sure to spur the side into action, meaning Pint – who had a massive 159-point victory last round – will need to be at their best to get over the line against a tough Buffettes outfit. Pint have had some real shaky form in recent weeks, sitting in sixth with four wins from eight rounds but have a dominant percentage that could see them rocket up the ladder with a good week on the field. Coming off a bag of six goals last week expect Casey Morris to be the go to girl in the forward 50 with her uncanny ability to find the sticks while Jasmyn Hewett can find the ball and hit the scoreboard if given time and space. The Darwin Buffettes will be looking to right their wrongs of last week with the likes of Kylie Duggan and Bianca Stokes hoping to lead the way.

Waratah will look for a confidence boosting win this week when they take on Tracy Village, with the Razorbacks only having won one match for the season thus far, a close victory over cellar dwellers, Hawks. Tracy Village will need to limit Waratah’s scoring ability, with the side able to pepper the goal posts thanks to a number of players who can impact well in front of goal. For Waratah, the side once again had issues with inaccuracy last round so will need to tighten up inside 50. Joanna Kolodziej had a strong performance last week able to hit the scoreboard and have an influence across the board with her ball winning abilities while Gemma Cusack is a scoring machine and can cause a muck in the forward half. For Tracy Village, Alexandra Briggs, Gabrielle Young and Tara Everett can all band together to form a dominant trio.

Southern Districts will look to bounce back this week after a difficult loss last round, and will certainly have a confidence boost when they take on a St Mary’s side that only put one behind on the board last round. The Saints have had an up and down season so far, unable to string multiple wins along but having some good patches along the way, making this a key match to put some goals on the board and bring back some consistency. The Southern Districts have host a key players in front of goal with the likes of Kelsey Patterson and Ebony Miller all getting on the board while first gamer Lucy Murray will be striving to keep up the good work after nailing her first goal last round. For St Mary’s Sharna Edwards has been nothing but consistent playing all eight games this season while Danielle Ponter knows how to cause an impact and will be hoping to bring some magic to the game to worry the opposition. Aaliyah Bailey is a handy player inside 50 given her scoring ability so except St Mary’s to look for her when pushing into the forward half.

Both the Magpies and Wanderers are coming off wins making this an interesting clash between the top four sides. Palmerston well and truly dismantled their opponent last round and will be looking to replicate that dominance heading into this match-up while the Wanderers will have plenty of confidence after coming from behind to clench victory. After a dominant performance in front of goal last round for the Wanderers, Shekeine De Satge will be wanting to influence the scoreboard once again if they are any chance to win. Maria Billias and Sophia Mauboy have also been key in recent weeks for the Wanderers and if can get on the board early will help to set the tone for the game. On the other hand the Magpies are not short of star-power in front of goal after nailing 16 goals last round with Arthurina Moreen and Jessica Stassi both scoring four majors apiece meaning if they can get loose in the forward 50 again they can do some serious damage. Iesha Ronberg has also been in hot form in recent weeks being named in the bests for the past three weeks.