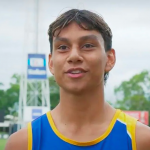 THE 2021 WAFL Colts competition got underway on the weekend, with the four fixtures providing some fairly competitive action. It took little time for much of the West Australian Under 19 talent pool to shake off the cobwebs in Round 1, and fans were treated to high-scoring games with end-to-end forays and even a bit of spirit.

Our featured match of the round, played between South Fremantle and West Perth, exemplified everything good about the opening weekend of football. In a contest littered with momentum shifts and fast-paced transitional play, the Bulldogs came out on top by 14 points 15.11 (101) to 13.9 (87) in warm conditions at Fremantle Oval on Saturday morning.

We take you through some of the top performers from either side in our Scouting Notes. Please note, they are the opinion of the individual scout.

Hultan was a sensation in the attacking half for South Fremantle, finishing with half-a-dozen goals and proving a handful for opposition defenders. While not an overly tall player at 182cm, Hultan defied his listing to play like a key forward at times with the way he commanded space and worked strongly in the air. He opened his account with an opportunistic goal from nothing in the first term and added another in the second, but was sighted contributing more work up the ground before the main break. Afterwards, his forward craft came to the fore inside 50 with some really crafty goals. His composure and willingness to compete at ground level proved the theme for two third term goals, while contested marking became his MO in the fourth with another two majors. Overall, it was a memorable day for the 18-year-old.

A key part of the Bulldogs’ strong midfield rotation, Drage won his fair share of ball on the inside early and did not mind getting nice and physical with the opposition. He looked to send the ball forward quickly from congestion with some hurried kicks away at stoppages, but also remained strong under tackling pressure to dish out by hand. As the game wore on, Drage also worked up to either end of the ground and was competitive in his efforts to ensure South could hold on for victory.

Stephens was South’s leading ball winner on the day with 22 disposals and provided some real drive from midfield with a game-high seven inside 50 entries. He looked to set the tone by wheeling and going quickly, while also working to string together some nice handball chains as South broke forward. Stephens almost troubled the scorers in the third term but pulled a snap wide, though his long kick to Lochlan Bloomer ended in a goal assist during the same stanza. He also ran hard back to defence in the fourth quarter after South was beaten in the middle, providing a clutch intercept at the death.

Another of the Bulldogs to play a key hand in midfield, Fraser provided a handy point of difference with his willingness to stay on the move once in possession at the contest. He was not as overtly dominant as a pure ball winner, but did some nice things with ball in hand and most importantly, impacted the scoreboard. Fraser’s first major came from a crafty and clean finish at a forward 50 stoppage, showcasing his quick thinking. His second was a set shot conversion on the end of a 50-metre penalty, having initially cut across to turn the ball over inside attacking 50.

The Fremantle Next Generation Academy (NGA) member and son of Daniel was lively in South’s win, rotating through midfield from up forward. He bookended his game inside the attacking 50 and constantly looked to create forward of centre, showing great confidence to take on opponents and baulk his way into open spaces. He first hit the scoreboard with some quick work over the back in term two, putting boot to ball with composure to snap through a classy goal. His second major was the highlight of the day through, as Motlop initiated a give-and-go hemmed in on the boundary, before cutting inside and snapping home once again. He is still a raw type who looks more comfortable up forward, but has rare instincts and constantly backs himself to make something happen.

Lochlan Bloomer was another South Freo forward to shine, taking his chances well for three goals on the back of some lively work inside 50. Liam Brandis and Ira Jetta were others to provide some spark in the front half, while Lachlan Turley played a key role down back and Toby Dodds‘ work on the rebound was terrific. Another Fremantle NGA prospect, Riley Colborne also showed promise on the wing.

Difficult to miss under his brightly-coloured helmet, Fleiner also has an eye-catching style of play. The run-and-gun defender loves to break the lines out of defence and strung together a number of passages with multiple running bounces. He is a kick-first kind of talent and often sent forward short, darting passes, but can refine some of his work at full tilt. His first term goal was one of the moments of the day, as Fleiner finished from long range on his favoured left foot having taken a couple of bounces and good meterage. While lightly built, another pleasing aspect of Fleiner’s play was his intensity and courage to work back defensively; flying for intercept marks and doing some dirtywork at ground level.

Reilly was one who worked well into the game and began to show his best traits once he built up a full head of steam. His first good bit of play came in the second term, with a spearing pass to assist Jack De Marte’s goal. The nippy midfielder looked smooth on the ball and often looked to dart into open space before delivering forward passes by foot. He set the tone for West Perth’s ball movement with a relentless willingness to move it on quickly, constantly looking to move with intent. Reilly seemed to lift in the final term and kicked a goal on the run having taken the advantage from a free kick.

Paton is a player with a lot of class and while he was not overly prolific with 15 disposals, his high level was evident in nearly every possession. He started a little shakily with a poor kick across defensive 50, but redeemed himself with some nice moments in the first quarter. A couple of important defensive efforts led to goals for West Perth in term two; with the first being a smother as South Fremantle looked to break out of defence, and the second a terrific holding the ball tackle which had the same effect. Paton seemed to have more time on the ball than most others and showed off with some nice spins to break out of congestion cleanly. If he can begin to accumulate better and string together such moments more consistently, he could quickly rise in 2021.

Leading all comers on the day with 23 disposals (20 kicks), De Marte was one of the more busy players out there. He built into the contest well and began to take hold after quarter time, propping nicely in congestion to get an open kick away and even sneaking forward to snare a goal in term two. His kicking became neater as the game wore on and he was one of the key West Perth players to lift when the game was on the line late. One particularly clutch play saw him lay a tackle and then deliver inside 50 for a Saverio Marafioti goal.

Robis was clearly West Perth’s premier forward on the day and finished with four goals in a highly promising display. He took a bit of luck to get going, but exemplified the Falcons’ ability to be efficient inside 50 with two snap goals in the first term. Later, he would showcase his smooth set shot routine to complete the four-goal haul and catch the eye of many onlookers. At 191cm, the 19-year-old is not exactly key position size, but rather dynamic and versatile in the role he plays up forward.

Cooper Blackburn showed plenty of dash coming out of defence for the Falcons, while Saverio Marafioti‘s raw talent came to the fore up forward with bull-like attack and real penetration in his play. Kane Bevan‘s transition to a key forward role yielded one goal, as Liam McWha and Riley Sprigg battled well in the ruck. Harrison Baxter was also handy in the front half and Jordan Berry had his moments.