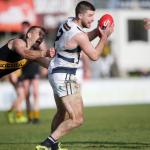 WHILE Victoria has descended into COVID chaos once more, state leagues rolled on in South Australia, Tasmania, and Western Australia with a bunch of intriguing results produced. While it was largely business as usual in the SANFL, there was a major boilover in the TSL, while the WAFL top five is firming as three teams continue to battle for top spot. We run you through all the results from around the nation and what they mean moving forward in this week’s state leagues wrap.

While Round 16 proceedings are currently under a COVID cloud, Round 15 went ahead without a hitch in the SANFL. There were two clashes between top five teams this past weekend, as ladder position counted for plenty with every higher-ranked side picking up full points across the five-game round.

At the top of the tree, Glenelg extended its perfect run to 14 games with an 18-point win over South Adelaide, who have now in lost three of their last four outings. A three-goal to nil opening term proved the difference, as the Bays put away another finals candidate. Matthew Snook (29 disposals, one goal), Luke Partington (26 and one), and Chris Curran (24 and one) were all prominent in yellow and black, while Bryce Gibbs managed 27 touches, 14 tackles and a goal in his 50th League match, fittingly against his old side.

Saturday’s other top five clash saw reigning premier Woodville-West Torrens power past Norwood, winning by 36 points on the back of a second half surge. The Eagles piled on nine of the last 10 goals after trailing at the main break, flexing their muscle forward of centre. James Tsitas and Mitch Grigg led the disposal count for either side with 29 touches apiece, while Tyson Stengle‘s two goals at the end of term three helped the Eagles push ahead.

Port Adelaide and Sturt remain in the hunt for finals after respective wins against the bottom two sides, though both came by a mere 13 points. The Magpies did enough to get past a plucky West Adelaide on Sunday, remaining one game out of the top five, while the Double Blues bettered Central District in a low-scoring slog to sit two games off the pace. North Adelaide was the weekend’s other winner, downing Adelaide by 54 points to strengthen its standing in third.

Clarence has shaken up the TSL top four frame, defeating North Launceston by two points in a major boilover. The Roos led by a single point at half time and after extending the margin to eight come the final break, were made to reclaim the ascendancy via Colin Garland‘s boot at the death.

The result sees Clarence close to within a game of its weekend rival, as the Northern Bombers suffer rare consecutive losses in what was meant to be a celebration for player-coach Brad Cox-Goodyer‘s 200th game.

Brandon Leary booted four goals for the victors in a losing effort for the Northern Bombers, while Garland finished with three and James Holmes was named best afield.

Meanwhile, league leader Launceston escaped a similar scare against Tigers, snaring three goals to nil in the final term to sneak home by 13 points. The Blues trailed at every break after the hosts got the jump, but clawed their way back and pounced at the ideal time.

In the weekend’s sole non-top four clash, Lauderdale powered past Glenorchy on the back of a 13-goal second half, saluting to the tune of 81 points. Leading a brigade of nine individual goalkickers for the Bombers was Edward Stanley (five), while Tyler Martin (four) and Allen Christensen (three) compounded their side’s scoreboard dominance.

East Perth inflicted the sole ladder change after Round 15 of the WAFL League season, jumping Perth in eight after its nine-point road win over the Demons. Former Carlton-listed pair Rohan Kerr (41 disposals, 10 marks) and Angus Schumacher (33 disposals, two goals) were prominent for the Royals, who held off Perth’s final term surge after leading by an even five goals at three quarter time.

A three-way tie for points from first to third remains after Claremont, Subiaco, and South Fremantle all claimed their ninth wins for the season. Subiaco still leads the way on percentage having defeated West Coast by 20 points, with 10 of the Lions 12 goals coming at one end of Leederville Oval.

West Perth came away as the round’s other winner after scraping past East Fremantle by five points, overcoming a half time deficit and near-costly inaccuracy to remain clean in fourth. The Falcons were served typically well by Aaron Black (38 disposals, nine marks), as Tyler Keitel and Lachlan Bailey booted four goals for their respective sides.

Victoria’s recently-extended five-day lockdown saw Round 14 of the VFL scrapped, with the competition currently running on a week-by-week scheduling basis. Victorian teams which travelled to Queensland also had their official fixtures cancelled, though Essendon and North Melbourne combined their reserves to face Brisbane in a scratch match on Saturday. Returning Roos tall Charlie Comben impressed with four goals in that hit-out.

The VFL Women’s finals series has also been impacted, but the VFL says it remains committed to awarding a premier with just the preliminary and grand finals left to play.