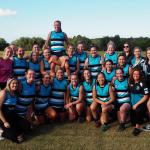 THE Southern Power boast a strong women’s football program that they have been building every year since their inaugural season in 2010.

The Power are from the Sutherland Shire and they play in AFL Sydney’s competition. They have focused on their youth program in recent years, which now has three teams, while they also have three senior sides, with one team competing in the Premier Division.

Senior player and assistant coach Kathryn Hull has been at the club since the beginning, and she shed some light on how the Power have progressed from having one team to over 70 registered senior players.

“Female football wasn’t what it is today in Sydney … at that stage (2010) we were like the seventh or eighth team in the one competition, and it was still like ‘bring a mate down to game day’ sort of thing from a numbers perspective,” she said.

After a few years of development, the club took a big step in starting their youth girls program, entering their first team in the Sydney Harbour Youth Girls competition in 2014.

“Soccer and netball were very large in the shire for female sport… so we had to make our own way where female football was the first priority, and that’s why we started with the youth girls program… since then we’ve built our teams with youth girls,” Hull said.

Prior to Covid-19 affecting the 2020 and 2021 seasons, the Southern Power had four youth girls teams competing in the under 12’s, 14’s, 16’s and 18’s, before they reduced it to three teams when Covid interrupted at the start of last year.

Hull has been heavily involved in the development of many young girls at the Power through her various coaching roles, and she says the program has been a big success with many players continuing their football journey.

“We are seeing the fruits of the last seven years of that youth girls program, those players are coming through, and it’s quite scary or nostalgic that these girls that I’ve coached for years are now my teammates.”

Hull says the Power are continuing to build a strong culture around the club, with little things like senior players assisting with youth training sessions helping ensure girls can continue to play and enjoy their footy as they get older.

“If we look at youth retention… by the time the girls get to 14, 15, 16, the drop off rate is huge, so we just want to make sure they’re enjoying their footy, and we really help promote that environment with our coaches and with our culture.”

“We all get together at the beginning of each training session, just have a bit of a chat, like ‘how was the weekend? What was good, what was bad about our game? Okay, let’s go into a normal warm up’, and we do those sorts of things together, and it just really creates a welcoming and inclusive culture,” she said.

Being a non-AFL state, the challenge of making AFL stand out to young girls wanting to play sport is always there, but after the inaugural AFL Women’s (AFLW) season in 2017, Hull said the league is playing a “massive role”, giving the sport a lot more exposure to females in Sydney.

She said “completing the pathway” was another key factor in getting more women to play footy as opposed to netball, soccer, and other sports.

“You can’t be what you can’t see, so just having that exposure, and then that opportunity from finishing Auskick… and actually knowing that ‘oh, we’re not just playing a very local based competition’, and it’s just more progressing as girls (in the sport).”

When Kristy De Pellegrini was drafted to the Giants ahead of the first AFLW season it was a great example for girls around Sutherland, showing that it is possible to play footy and take it to the top level, and Hull described it as “absolutely monumental and huge to our movement”.

With this year’s pick 55 Brodee Mowbray also coming from the Southern Power, Hull said it’s another “huge movement” for the club, showing that exposure and the opportunity that players have.

The Sydney Swans and GWS GIANTS Under 19’s academies are also playing a big role in the progression of women’s footy in Sydney, and with Power players Kiara Beesley, Ruby Sargent-Wilson, Sarah Hepinstall, Kyla Tracey, Jessica Whelan, Kiana Davis-White, and Mowbray all having been involved in these teams, it shows the strength of the Power’s program, and the work ethic of Hull and the other coaches at the club.

“It was exciting seeing teammates playing against each other in the different academies, and just what the girls got out of it, and then seeing them week in and week out taking that back to club level… is really promising, not just having the girls potentially as draft prospects, but also how that’s affecting the league and will affect the league in Sydney.”

“It’s just been huge to see these girls have so many more touches of the footy years before I even started playing, so the quality of footy is just going to be amazing in a few years,” Hull said.

The Power were heading towards a successful 2021 with all three senior teams in premiership contention, but after the season was cut short by Sydney’s Covid-19 outbreak, Hull says the team is focused on coming back next season and maintaining the same level.

“We want to maintain that our prem’s team (Premier Division) is able to compete and we’re staying up there with those other clubs… that means everything from the players all the way up to the coaches.”

“Then looking at bringing those girls through, not just from the Power’s youth girls program, but from other junior clubs in the shire… and just making sure these girls are staying to continue that brand of footy in Sydney South,” she said.

Meanwhile, Hull and her teammates are eager to get back into training as soon as restrictions are eased.

“Hopefully, mid-October is looking like we might get some of the restrictions eased, so we’ll start an early pre-season for 2022.”