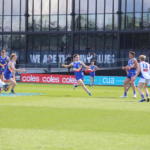 THE 2021 NAB League season commenced across a five-day stretch from Thursday to Monday, with players blowing out the cobwebs and getting stuck back into competitive action. There were a number of outstanding individual performances across the six fixtures, with top five draft candidates and some fresh faces topping a range of categories. We take a look at this week’s stat leaders.

It was no surprise to see Eastern Ranges jet Tyler Sonsie soar straight to the top of the disposal charts, racking up a round-high 34 touches in his side’s win over the Calder Cannons. A classy midfielder who can roll forward, Sonsie also notched up six inside 50s and booted two goals in his best afield display. The 18-year-old’s performance only solidified his standing as a top five draft candidate this year.

Gippsland prospect Max Walton was not far behind his metro counterpart in the Power’s loss to Dandenong, kept busy in the back half with 32 disposals. A remarkable 30 of them were kicks, making him a clear leader in that category as well as in the rebound 50s count (10).

Both players had teammates feature elsewhere, with Gippsland skipper Luis D’Angelo notching a high of 15 handballs to be equal with Geelong top-ager Archie Hildebrandt, and Thomas Crole booting four goals for Gippy as Corey Preston managed the same feat for Eastern. Preston’s teammate Jake Arundell also recorded the most inside 50s (eight) alongside Calder’s Harrison Andronaco and Dandenong’s James Cahill.

Flying Calder wingman Flynn Gentile has found plenty of the ball in his two games thus far, and that was no different on Friday as he worked hard for 15 marks. Speaking of, Oakleigh’s Julian Gangi got his hands dirty with nine tackles in one of the most high-quality games of Under 19s football ever, against Sandringham. Geelong tall Toby Conway was the round’s other chart-topper, winning a monster 33 hitouts on Thursday evening.

It is worth noting, a trio of Western Jets talents also achieved would-be highs in their standalone season opener against Calder. The players in question were Liam Conway (eight inside 50s), Cody Raak (11 rebound 50s), and Adam Azzopardi (nine tackles).

Find the full list of Round 1’s stat leaders below.