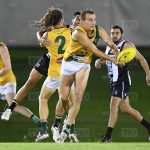 THE Northern Territory Football League (NTFL) Men’s Premier League season returned over the weekend, and while the opening match of the round between Tiwi Bombers and Waratah was postponed due to a potential COVID-19 concern, the rest of the round was complete on a super Saturday of matches. The top three sides all came away with confident wins, with ladder-leading Nightcliff retaining top spot on the table after another excellent effort.

Wanderers added another win to their tally to start off the tail end of their 2020 season, and while the side certainly bounced back from their disappointing loss to St Mary’s prior to the break, the Muk Muks were well and truly kept accountable by the Districts in this encounter. Only staying ahead at half-time by a couple more scoring opportunities, the Districts’ defence kept up well with the Wanderers’ firepower but ultimately could not withstand the pressure throughout the entire contest with the first and second halves telling of the final result. An eight goal to three second half told the true tale of the match, with a flurry of multiple goalkickers allowing the Wanderers to maintain control under pressure as the close affair finished with a solid 45-point margin and win number nine in the books. Dray Thompson and Brydan Hodgson were listed amongst the bests for the Muk Muks, both booting a goal apiece to assist the likes of Dane McFarlane (three goals), Joshua Cubillo and Shaun Mannagh (both two), while for the Districts it was the efforts of primary goalkickers, Travis Carroll and Jonathan Ross, aided by Luke Kiel and Liam McGregor that saw the side flourish under pressure in the second half.

While Palmerston put in a tough effort against St Mary’s, it was not enough in this encounter with the Saints’ first quarter showing of five goals to nil seeing the side take control and not relinquish easy scoring opportunities from there. That being said, the Magpies certainly bit their way back into the contest consistently, never allowing the Saints to really pull away with a convincing lead and biting at the heels of the second-ranked side. Tight defence from the Magpies was not enough to control proceedings with little going the side’s way in the first term, unable to convert off opportunities inside 50 while the Saints seemed to have the ball on a string up forward, applying plenty of scoreboard pressure through Jackson Calder, who booted a goal per quarter to finish with four majors, and Nate Peredes out the front with two. A flurry of individual goalkickers also plied their trade for the Saints, while Jackson Geary and Nicholas Yarran were listed amongst the best alongside Calder. For the Saints, Toshie Kunoth and Tyrrell Lui booted two apiece to reduce the margin.

A first half blitz from Nightcliff well and truly set up the top side for a solid win against the fifth-ranked Buffaloes, and while the home side well and truly fronted up after the half-time buzzer, it just was not enough to contend with the powerful Nightcliff forwards who utilised every opportunity inside 50, and for the most part, efficiently and accurately. While the Buffaloes certainly redeemed themselves in the second half, booting 3.8 to Nightcliff’s 3.4, it was not enough against a hugely powerful side, which saw 13 individual goalkickers. For the Buffs, a three-goal haul from Brodie Foster helped immensely, while Nightcliff’s Kyle Emery (five goals), Trent Melville (three) and Cameron Ilett showcased plenty of intensity in the huge outing. Nightcliff’s winning streak continues on their way to back-to-back premierships with this encounter taking the side’s win count to three straight following their Round 10 bye with the Wanderers, while the Buffaloes remain seated just outside the top four and trailing the leading sides.