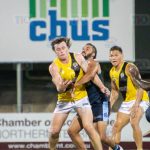 WITH the NTFL Men’s Premier League season coming to a halt over the Christmas period Draft Central casts an eye over how the teams are tracking, some of their key contributors throughout the season so far and how they are shaping up for the rest of the season.

The Buffaloes are well within touching distance of the top four, sitting just outside based on percentage and will be eager to climb further up the ladder to better position themselves for finals. They have had a relatively inconsistent run of form recently but have also been faced with a couple of top contenders in Nightcliff and St Mary’s. The Buffs will head into the break on a high collecting a strong win over Tiwi Bombers to cap off the 2020 part of their season and will be preparing for the top of the table Nightcliff in the opening game of 2021.

Brodie Foster has been the main avenue to goal for Darwin, nailing 36 majors from his 11 outings while Matt Campbell has also proven to be a livewire up forward with his ability to slot them from anywhere and notching up 23 for the year so far. Ishmael Palmer and Jarrod Stokes have also showcased their worth with 17 and 15 majors respectively highlighting the number of options they have when going forward. Ryan Pendlebury has proven to be a smooth mover for the Buffs while Joseph Collinson can hit both the scoreboard and the bests making him a crucial cog in their armour.

Sitting pretty on top of the table, Nightcliff have won nine of their 12 games this season but have had a bit of a chequered run of form in their last five outings notching up three wins, a draw and a loss to the Southern Districts. They boast a commanding percentage, which provides some much needed separation between them and the second placed St Mary’s who are hot on their heels. On return, Nightcliff are faced with Darwin Buffaloes making for an exciting battle.

When looking at their key standouts it is hard to go past the services of Kyle Emery who has been a star up forward with his 38 goals from 12 games, leading the goalkicking tally for the squad. Cameron Ilett has also featured highly on the goalscoring front, booting 28 majors from his 11 appearances while the next closest is Liam Holt-Fitz and Trent Melville with the pair putting on 15 goals apiece. Aside from scoreboard impact Dominic Brew has proven to be a force to be reckoned with appearing in the bests eight times while Ilett has displayed his ability to have a regular presence across the ground frequently named in the bests for his efforts. Other key contributors in Ryan Mu, Mack Rivett and Thomas Boyd are just a few names to keep an eye out for when play returns next year given their ability to have an impact on the course of a game and ply their trade effectively for the top of the table side.

It has been a difficult season for the Magpies who have only managed to muster up two wins for the year and suffered a number of hefty defeats. In fact Palmerston has only won, one of their past five games and that victory was against the bottom placed Bombers. Despite having strong moments, the Magpies have been unable to maintain that same pressure and presence for a full four quarters as shown through their win-loss ratio. Unfortunately it will not get any easier when they return in 2021 up against St Mary’s who are in hot form.

The scoring options are somewhat limited however Toshie Kunoth has put his hand up to steer the ship throughout the season with his 15 majors while he has been ably assisted by the likes of Nigel Lockyer Jnr who has booted 13 goals across his nine games. The scoring drops off after that with the next best Aiden McAdam with six. In terms of consistent performers Eric Guthrie is up there registering nine best on grounds while Matthew Dennis has also accumulated nine. Rohan Armstrong is another commanding force for the Magpies as is Christopher Williams with the two capable ball winners.

Although it might not have been the start Southern Districts were after there are still plenty of positives to take out of their season notching up five wins, with two of them coming in their past five outings, one against Nightcliff and the other against the Magpies. They have struggled to string together consecutive wins but are still somewhat in the hunt if they find the right mix and build a strong backend of the season. Their campaign kicks off against the third placed Wanderers when play resumes in January.

Looking at goalkickers for the Crocs and it is Andrew Boseley that holds the mantle as number one with 19 goals from his 12 appearances while Jay Dahlhaus has been influential since joining the side with his 12 majors. Luke Kiel is a handy goalscoring option boasting 12 goals for the season while Billy Rolfe and James Tsitas have managed 10 goals apiece for Southern Districts. When it comes to reliable performers it is hard to go past the likes of Charles McAdam and Jesse Clark with the duo recording seven bests each. Dean Staunton is not far off with six while Dahlhaus and Kiel are also heavily influential with ball in hand. 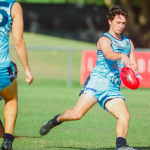 THE 2020/21 Northern Territory Football League (NTFL) Men’s Premier League season bounced down on Friday night, signalling the start of what is set to be a interesting period in Top-End football. Reigning premier, Nightcliff again got the better of St Mary’s in the much-anticipated Grand Final rematch, while Waratah stormed out of the blocks with a terrific season-opening win over Palmerston under lights at Gardens Oval. All that, and more in our Round 1 wrap.

Under new Friday night lights at Gardens Oval, Waratah opened its season on the perfect note with a 69-point win over Palmerston. The game was held as tribute to former Warrior, Alex Aurrichio, who sadly passed away in June this year. Tom Fields, who had been with the big American throughout his footballing journey, honoured his good mate with four goals for the winners in a best-afield display.

The Magpies, last season’s wooden spooners simply failed to match Waratah’s firepower, as the Warriors took hold of the game with 12 goals to three across the second and third terms. Fields, along with a number of key recruits played their part for either side. Port Melbourne gun Callum Searle was terrific across half-back for Tahs, while former Buffalo Chris Williams made a promising start to life in black and white despite the loss. Second-year Warrior Jae McGrath was dangerous up forward with four majors, aided by Kim Kantilla (three goals) and Brodie Carroll‘s two majors from midfield.

Mainstay ruckman Matthew Dennis was typically solid for Palmerston, while Nigel Lockyer Jnr showed off his dynamism with high flies and a long-range effort among his four goals. Much was made of the Magpies’ off-season, but it seems as though the team will require a settling-in period to properly gel before making a tilt for finals.

Darwin defied the impact of an off-season exodus to take out a high-scoring affair against the Tiwi Bombers on Saturday, thumping their rivals to the tune of 64 points at Gardens Oval. Big bags of goals from Darwin’s Brodie Foster (six) and Tiwi’s Nathan Scagliarini (five) headlined the best performances, as fans were treated to a feast of 38 majors. After conceding a three-point deficit at half time, the Double Blues went on a rampage with 16 goals in the second half to come away comfortable winners in the end.

Young forward Ishmael Palmer (four goals) was also among the Buffs to join in on the goalkicking act, with Joseph Collinson booting three, and former Tiwi player Cade Abala matching the feat. Experienced heads in Matt Campbell and Jarrod Stokes added two majors apiece to help new coach Cameron Stokes to a debut victory, while a fresh face in Dylan Gordon was also among Darwin’s best.

While VFL coup Scagliarini was clearly Tiwi’s best for his performance rotating through midfield, a bunch of fellow goalkickers also featured prominently. John Tipiloura snared three majors, while Geelong-based key forward Angus Byrne managed two in a promising start to his NTFL career. Mainstays Paddy Heenan and Roy Farmer also found the big sticks while being named among the Bombers’ best, but there is plenty of room for improvement for this week’s losers.

It was not always pretty, but Wanderers secured a hard-earned win over Southern Districts in a low-scoring thriller decided by just four points. The Eagles were led brilliantly by skipper Braedon McLean, who was assured in defence as the likes of Shane Thorne and Brayden Culhane (both two goals) provided a spark up the other end. Having trailed at half time and the final break, the Muk Muks had it all to do in the fourth term, but overtook the Crocs with two goals to one.

The fixture also served as Joel Cubillo‘s 100th game, which turned out to be a great success. As was a theme in the opening round, Victorian recruits impressed in this clash, with VFL jet Shaun Mannagh and Calder Cannons product Brodie Newman both starring for the Eagles. Former Port Adelaide forward Brett Eddy also started his season well with a goal, and a spot among Wanderers’ best.

New Crocs captain Dean Staunton was among his side’s best contributors, but it was Lionel Ogden who stole the show as Districts’ top player for the day. Billy Rolfe also booted three goals on his club debut as the Crocs’ sole multiple goalkicker. New coach Matt Cannard could not quite push his team over the line for the win, but should have some good talent rotate through the side this season, even without Josiah Farrer.

Reigning premier, Nightcliff sent a message to its competitors with an impressive 42-point win over St Mary’s in what was a rematch of the 2019/20 Grand Final. The Tigers were near their clinical best and simply boasted too much firepower for the Saints to handle. Their class took full toll in the final term, with a four-goal to nil period sealing the result in style.

After another busy off-season, it seems the Tigers are going to be difficult to knock off their mantle as the competition’s top contender. While the likes of Matthew Bricknell and Liam Holt-Fitz went to work up forward with three goals apiece, Nathan Brown was solid as ever down back to claim best afield honours. Veteran Cam Ilett was again prominent, while recent additions Tom Boyd and Dom Brew also featured among Nightcliff’s best half-dozen. Former Palmerston forward Kyle Emery also managed a pair of goals upon his return to the den.

For St Mary’s, former Brisbane forward Jackson Paine was named best afield ahead of newcomers Brandon Grenfell and Lucas Jellyman-Turner, the latter of whom booted two majors. Usual suspects Shaun Edwards and Nate Paredes were also on form, but could not quite do enough to keep the Saints within touch for four quarters.