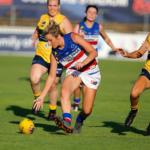 IN the third round of the South Australian National Football League (SANFL) Women’s competition, Glenelg and Norwood remained unbeaten, while Central District picked up its first win of the season and South Adelaide bounced back with a victory.

In the opening game of the round, last year’s wooden spooners, Glenelg showed the opening two rounds were far from a fluke, knocking off preliminary finalist, North Adelaide in a 15-point win at City Mazda Stadium. In a high-scoring opening term, Norwood got on the board first courtesy of a goal from Lauren Daniel, before three consecutive goals to Glenelg had them hit the front by 12 points. Roosters’ leading goalkicker, Kelly Barltrop scored one more before quarter time to cut the deficit to six points, before Paige Allan leveled the score just two minutes into the second term. Madisyn Freeman booted her second of the contest shortly before Barltrop nailed her second and both sides were level at the main break. A goal each in the third term could still not split them, before Glenelg’s Rebecca Steer and Hannah Crump both made opportunities count in the last term to record an impressive win. Chelsea Packer was the highest ball winner for the Tigers, racking up 16 touches, four rebounds and two tackles, while Jordan Bardley (five inside 50s) and Lucy Bellinger (six tackles) both had 12 disposals. For North, Amber Ward had 15 disposals and four rebounds in the loss, while Nadia Von Bertouch laid five tackles from 14 disposals and booted a goal. Leah Tynan played an important role with seven tackles from 10 disposals and three inside 50s, while Adrienne Davis recorded four inside 50s as well as 14 touches. Next round after a bye, Glenelg hopes to make it four on the trot when they take on West Adelaide, while North Adelaide takes on reigning premiers, South Adelaide.

Central District gained the early bragging rights between the league’s two newst sides, running out 28-point winners over Woodville-West Torrens. Both sides headed into the game with two consecutive losses under their belts, but it was the Eagles who struck first blood. A goal to Kiana Lee resulted in the visitors taking an early lead, before Bulldogs Isabella Wilson and Katelyn Rosenzweig booted goals before the first break to lead by six points. The Eagles missed a number of opportunities in the second term and Central District made them pay, with Tara McDermott, Sarah Perkins and Kiana Lee (the latter two twice) all missing opportunities. Wilson and Rosenzweig both scored majors, as did Chantel Reynolds, while Perkins kicked the Eagles’ only goal of the term to trail by 13 points at the main break. Central District went on with it after the half, as Amy Fisher, Reynolds and Rosenzweig all capitalised, though they also missed a number of opportunities in the scorching heat, but took a 33-point lead into the final break. Goals to Rachel Dunstan and Perkins early in the fourth quarter cut the deficit to 22, but Abbey Scheer snuffed out any chance of a comeback with an important goal as the Bulldogs ran out comfortable winners. The Bulldogs shared the ball around with no-one dominating possession as Scheer and Danielle Stewart both recorded 13 touches. Stewart also had four inside 50s, three rebounds and five tackles, while Gemma Doughty was strong in defence with five rebounds. Alicia Butler laid a team-high seven tackles from her nine disposals. Stephanie Walker was the Eagles’ highest ball winner with 18 disposals, seven inside 50s and two rebounds, while Jaimi Tabb was prolific again with 15 disposals, five inside 50s and five tackles. Lee and Perkins were the key targets but missed some opportunities, booting 3.5 between them. After the bye, Central District hosts the winless Sturt in a chance to go back-to-back wins, while Woodville-West Torrens faces premiership favourites Norwood.

Norwood did what many expected the Redlegs to do, but not without a fight. The undefeated side took on the winless Double Blues, but found themselves 12 points down early following goals from Sophie Hoyle and Lane Trenorden. Jo Hill booted a late major for the Redlegs to cut the deficit to four points at the first break, then Monique Hollick made it count midway through the second term. Lauren Lovell booted on on the edge of half-time for the Double Blues to hit the front, but only by a point at the main break. The second half belonged to Norwood as the Double Blues could only boot five behinds as Kate Fenton, Emma Clark and Najwa Allen all converted opportunities to run over the top of Sturt and remain undefeated from three rebounds. Sophie Armitstead had 19 disposals, nine tackles, four inside 50s and two rebounds, while Hollick was busy with 17 touches, six tackles, four inside 50s and a goal. Leah Cutting was dominant once again in the ruck with the former basketballer amassing 28 hitouts and six tackles from nine disposals, while Alison Ferrall and Rhiannon Busch were vital in the back half with a combined seven rebounds. For Sturt, Hannah Prenzler recorded a team-high 14 disposals as well as two inside 50s, four rebounds and four tackles, while Alex Ballard and Lucy Griffith both had 13 touches. After next round’s bye, Norwood hosts the winless Eagles, while Sturt hopes to break its winless drought against Central District.

In the final game of the round, reigning premiers South Adelaide showed their class with a 16-point win over West Adelaide. The Bloods headed into the game undefeated having knocked over the two new clubs of the competition, and leading goalkicker, Chelsea Biddell booted the opening goal of the game to give the visitors some hope. Indy Tahau, Madison Bennett and Mykala Walker-Murphy all booted goals heading into the first break to take a 12-point advantage into quarter time. Melanie Elsegood was quick to get West Adelaide back on the board early in the second term, but Danielle Goding scored in the dying minutes to re-extend the lead back to two goals. By the final break West Adelaide showed they were up for the fight thanks to goals to Emma Smith and Zoe Venning to draw within eight points at three quarter time. When Biddell booted the first goal of the fourth quarter to give the Bloods hope, the reigning premiers found an answer in Hannah Munyard and Indy Tahau who both found the big sticks and resulted in the Panthers recording a solid victory over much improved opposition. Panthers big ball winner, Czenya Cavouras had 10 more touches than anyone else in the competition on Friday, racking up 29 disposals as well as 10 tackles and five inside 50s. Teah Charlton (19 disposals, three tackles and two inside 50s) and Nikki Gore (19 disposals, six tackles and three inside 50s) were also productive, while Montana McKinnon continued her good season in her top-age year with 23 hitouts from 14 disposals, seven marks (a massive five contested), two tackles and two inside 50s. Abbie Ballard was the top disposal winner for the Bloods with 18, also recording six tackles and three inside 50s, while Rebecca Owen (16 disposals, four marks, four tackles, two inside 50s and three rebounds) and Madison Newman (13 disposals, two tackles, three inside 50s and four rebounds) were also impressive despite the loss. After the bye, South Adelaide takes on the Roosters, while West Adelaide hosts the undefeated Glenelg.