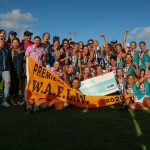 ROUND 2 of the West Australian Football League (WAFL) Women’s competition kicks off with a Saturday night and early Sunday morning fixture to help with the heat, as a number of young guns aim to state their claims against experienced opposition.

A grand final rematch kicks off Round 2 of the WAFL Women’s, with reigning premiers Peel Thunder unfurling their flag last week, then grabbing their first points of 2021 with an impressive win over East Fremantle. Now they come up against a Subiaco side looking to also go 2-0 after surviving a late fightback from South Fremantle in the last quarter of their Round 1 encounter.

Ella Roberts picked up where she left off in 2020 last week, booting two first half goals before being locked down by the Sharks in the second half. Subiaco knows just how dangerous she can be, so expect another tough day for the teenager who will learn to deal with extra attention. Fellow young gun Courtney Rowley showed good signs in Round 1 and will look to build on that for Round 2, providing a crucial run-and-carry on the outside. Beth Schilling provided a target up forward for the Thunder in Round 1, and throw in Jade Briggs and Kate Bartlett, and the Thunder have heaps of X-factor inside 50. Tanisha Anderson and Jaide Britton are another couple of talents to watch out for, with Britton named as co-captain for Western Australia ahead of the Under 19 Championships.

Despite the Thunder getting up in the grand final last year, Subiaco had won all of the previous four clashes against the Thunder, and will be hoping to restore that back in this game. They have some young talent of their own with Claire Ortlepp off half-back and Jamie Rust up forward. Captain Tarnica Golisano will also give a four-quarter effort, whilst Fremantle AFL Women’s injury replacement player Maggie MacLachlan has been named for the game. Similarly, Kia Buckley and Abbey Dowrick have both been named on the bench with the hope they can return to the side.

Both these sides have some terrific young talent, as well as some crucial state league and top-level experience, so expect it to be a terrific match, though Peel Thunder will be favourites after stamping their authority in Round 1.

Two sides that were on opposite sides of the coin in nail-biting encounters do battle in the second Round 2 clash, with South Fremantle hosting Swan Districts at Fremantle Community Bank Oval. An early 9.30am fixture provides fans with a way of avoiding an averse weather conditions like the Swans suffered through during their six-point low-scoring win over Claremont last week. The Bulldogs lost the points, but certainly lost no fans in a spirited fightback against Subiaco in the final term only to fall short.

Pia Durk in the midfield has been touted as one to watch this season for the red and whites, with Lauren Vecchio the ever-reliable leader onball. Poppy Stockwell returns to the side as a crucial forward option, while Ash Reidy and Tahlia Holtze are others for the Bulldogs who have been named at opposite ends on the flanks. South Fremantle coach Beau McCormack said in the preseason that ex-rugby player Makaela Tuhakaraina is one to keep an eye on in 2021. Zoe Huggett booted three goals in the narrow loss last week and will be a key target once again inside 50.

Swan Districts are a young side, but have plenty of upside, with Dana East and Jessica Cox among the developing talents at the black and whites. They provide the inside presence with ruck Sarah Wielstra getting better by the week as a ruck/forward, while Tara Stribley is the outside distributor needed for that touch of clash. Bella Edgley was the difference for the Swans in Round 1, with her two goals because crucial in challenging conditions, while Jamie Henry is another young talent who will play in defence with the likes of experienced backs, captain Emily McGuire, and Lauren Osborne.

Swan Districts will be favourites to continued South Fremantle’s losing streak, but the Bulldogs showed terrific signs last week and been at home, they know anything is possible with the talent they have brought into the club.

The final game of the round takes place at 1pm on Sunday when two Round 1 losers face-off. Claremont went down in a narrow loss to Swan Districts last week, whilst East Fremantle was competitive early, but ultimately overwhelmed by the end against a dangerous Peel Thunder outfit. The Tigers will be hungry for more success in 2021 after just letting the game slip despite having chances, while the Sharks will need to overcome the loss of Rachel Ashley to injury which was one of the turning points in the game last week after the returning utility booted two goals from full-forward.

East Fremantle have a balance of youth and experience on the field, but are a very different-looking side to 2020. Rosie Walsh returns to the side after missing Round 1 and will look to take up a ruck role teaming up with Laura McClelland who stepped up to League football last week. Sharon Wong provided the four-quarter consistency you expect from her, while Ashleigh Gomes and Kahra Sprylan will be some of the crucial talents in adding experience to the Sharks’ lineup. Chloe Reilly has been named to start in defence again, with the forward taking on fellow West Australian Under-19 State Academy talent Amy Franklin in a huge head-to-head. With Alex Williams named in a back pocket and Sara Lewis up forward, the Sharks having marking targets at both ends.

For the Tigers, Rachel Ortlepp was a source of rebound last week, and she will go head-to-head with another young talent in Zoe Gillard. West Coast’s Sophie McDonald has been named to suit up for the Tigers this week for some crucial stability in defence, while the onball brigade of Ella Smith, Jess Low and Sasha Goranova are as hard as they come. Up forward, Franklin is always an imposing figure with her marking and athleticism, while Jacinta Valentini and Sarah Garstone also have State Academy experience. The Tigers are a well-balanced squad with Brooke Hongell showing some promising signs up forward last week and will be keen to capitalise more in this match.

Claremont seem to be set for a win after getting so close last week, but some important inclusions for the Sharks mean they will be more competitive for longer. 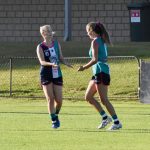