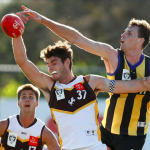 THE 2021 Victorian Football League (VFL) season rolled on into its third round over the weekend, with 1 fixtures spread from Thursday night to Sunday afternoon. There were a number of outstanding individual performances among the Round 3 action, as AFL-listed talent and state league guns alike topped a range of key categories. We take a look at this week’s stat leaders, as well as the season tallies to this point.

Usual forward Jake Riccardi swung into defence for GWS on Sunday and had a blinder, seeing him top the league for kicks and marks in Round 3. The 21-year-old racked up 40 disposals, with 31 of them delivered by foot and 19 earned via marks. His dynamic performance helped the Giants to a 30-point win over Southport, their first for the season.

It was no surprise to see Coburg ball magnet Marcus Lentini again tick over the 40-disposal mark, this time managing 42 against Brisbane in what was a battle of the Lions. The mid-season draft hopeful was just pipped atop the handball charts on the weekend by Gold Coast’s Will Brodie, who dished out 22 in the Suns’ narrow loss to Collingwood. In the same game, first year Magpie Reef McInnes got his hands dirty with a round-high 11 tackles.

Elsewhere, competition leading goalkicker Matt Hammelmann upped his season average (5.3) with a bag of six majors as Aspley went down to Frankston. The effort accounted for over half of the Hornets’ score, brining Hammelmann’s season tally to 16 after three games. Western Bulldogs ruck Jordon Sweet also excelled in his field, feasting to win 38 hitouts against inexperienced Northern Bullants’ talls.

Looking at the season leaders, Frankston jet Nathan Freeman has served a reminder of his class in 2021 with a clean run, topping the league for disposals and kicks. Jacob Dawson is another former AFL player finding plenty of ball, distributing more than any other player thus far by hand. Hammelmann and Casey’s James Munro are the other state leaguers topping charts, while AFL-listed bigmen Connor Ballenden and Ned Reeves have the most marks and hitouts respectively.

Find the full list of Round 3, and 2021 season stat leaders below. 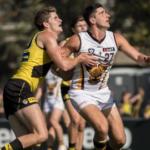 ESSENDON returned to winning ways while Port Melbourne notched up their fifth win on the trot. Meanwhile, the Tigers remain on top without a loss following Round 7 of the Victorian Football League (VFL).

The Bulldogs bounced back from last week’s draw against Box Hill with a solid victory over Werribee. Footscray started fast and led most of the day, only falling behind midway through the third term. Daniel Giansiracusa’s men lifted and extended the lead to as much as four goals in the final quarter before eventually settling for an 11-point win. Bailey Dale kicked three goals and had 21 disposals for the home side while Max Augerinos slotted three for the Tigers. Pat Lipinski had the most touches on the ground with 30 as former Docker and Sun Michael Barlow produced another strong showing with a goal and 28 disposals.

It was another case of close yet so far for the Dolphins on Saturday as the Blues ran away the victors at Ikon Park. The final margin of 25 points perhaps doesn’t do the contest justice, with just two goals in it at three-quarter time and Frankston closing to within a goal early in the last. It was a day out for Patrick Kerr as he slammed home six majors, while Alex Fasolo and Jason Kingsbury kicked two apiece. Darcy Lang notched up 28 disposals, with Josh Newman the standout again for Frankston, collecting 26 disposals.

A rampant second half performance by Port Melbourne saw the Borough take home four points for their fifth win in a row at Casey Fields. Leading at half-time by a point, the Demons would kick only two goals for the remainder of the match. Jordan Lisle did much of the damage for Port, kicking six goals as Shannen Lange assisted with three goals and 31 disposals. James Munro was best afield for the Demons with 29 disposals and 18 tackles while Brayden Preuss chimed in with two goals and 34 hitouts.

The Tigers continued their impressive form with a hard-fought victory over Box Hill at Punt Road. The Hawks held the largest lead of the match 23 points up close to half time, however Richmond found a way to come back, taking control late in the third and doing enough to hold off Box Hill in the last. An AFL call-up for Patrick Naish can’t be too far away as he once again dominated with 28 disposals, while Dan Howe had 25 for the away side. Dan Butler and Jackson Ross kicked three each for their respective sides.

Williamstown recorded a solid 32-point win away to Coburg on Sunday afternoon. A six-goal nil first term set the tone for the rest of the match, however the Lions should be credited with continuing the battle and not letting the Seagulls run away with a larger win. Sam Dunell booted five goals for Willy while Adam Marcon kicked one major from 23 disposals. Luke Bunker had the most touches of anyone on the ground with 27.

Collingwood’s finals hopes are in serious doubt after yet another close loss, this time to the Cats on the road. It was a close contest all day before Geelong opened up a 25-point lead halfway through the final term. The Pies fought back but ultimately fell short by seven points. Alex Woodward is looking to be an early favourite for the Liston Trophy after another 32-disposal display. In good news for Collingwood fans, Brayden Sier and Josh Daicos played well with a goal apiece and 24 and 23 disposals respectively. Wylie Buzza kicked five goals for the Cats.

The Bombers fought off an impressive Zebras comeback to record victory at Trevor Barker Beach Oval. Essendon started fast, kicking seven goals to two in the first term before Sandy came out with fire in the second, kicking five to one. With all the momentum, one would have expected Sandringham to continue their display in the second half, but Essendon held strong and eventually ran away 13 point winners. St Kilda’s first pick in last year’s draft, Max King, booted four goals while Danny Younan kicked four for the Bombers. Hunter Clark kicked a goal and had 32 disposals while David Myers racked up 29 and kicked three. Billy Longer dominated in the ruck with 57 hitouts.