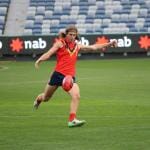 AFTER a successful off-season that saw many South Australian National Football League (SANFL) players reach the highest level, the 10 clubs again begin the journey towards the 2019 premiership. Our South Australian writers take a look at how each side is shaping up in the pre-season.

The Adelaide Crows SANFL team will be headlined this season by former AFL-listed forward Matthew Wright who will captain the team into the 2019 season. Wright will also take on a role as a part-time development coach with the club after announcing his retirement from the AFL after three years at Carlton. The club did not draft any players from South Australia and picked up Allies star midfielder Chayce Jones, who played Round 1 in the AFL. Will Hamill and Lachlan Sholl will be intriguing prospects for the Crows, as Ned McHenry should be on the fringes for an AFL debut sometime throughout the season. The Crows also gained Shane McAdam from Carlton through trade after he was selected in the mature-aged pre-draft after a stellar season for Sturt. Out of the Crows SANFL contracted players, Jordon Boyle from Salisbury North impressed the most last season, but Michael McMahon and 2018 Dean Bailey award winner Corey Davey should be their best contributors. With Tom Doedee suffering a season ending ACL injury in Round 1 against Hawthorn, the Crows may potentially consider taking a player at the first AFL mid-season draft to bolster their defensive stocks.

Central District will be hoping for a swift return to finals football after a rare finals absence in 2018. Former Crow Troy Menzel headlines the new recruits returning after five years in the AFL with Carlton, Adelaide and a dominant premiership stint in the SAAFL with Tea Tree Gully in 2018. The Dogs have also recruited a trio of Neagle’s- Jydon, Matthew, and Jaxon– from Wodonga and will be looking to make the most of the opportunity at the Ponderosa. Tim Auckland– 2018 Adelaide Crows SANFL contracted player- impressed enough to earn himself a contract at the Dogs and will be the one envisaged to replace the outgoing Darcy Fort. Central were one of the club’s to be hit most by AFL Draft, with Jackson Hately (GWS), Jez McLennan (Gold Coast), Aaron Nietschke (Melbourne) and Fort (Geelong) all recruited. 2018 leading goal kicker John Butcher and former Docker Jack Hannath have also both moved onto new opportunities outside of the game.

Things have been very busy in the offseason at Brighton Road with some big names to the club. Ex-West Coast midfielder Luke Partington will look to have an immediate impact on the side slotting straight into the middle. Added as well is Ex-Geelong forward and local Glenelg boy, Cory Gregson. Despite his injury troubles whilst in the AFL system, the best of Gregson will compliment a strong Glenelg side. With key experienced players Liam McBean and Brad Agnew back to the Bay, this looks like the strongest Glenelg squad for some years. Despite losing Tobin Cox to Port Power, and some other players moving, the talent coming is excellent. Coach Mark Stone has young talent to work with, with 2019 Top 10 draft hopeful Will Gould showing he is ready for league footy in the pre-season and has been rewarded with a Round 1 berth. Gould is a versatile player with a strong body who will be looking to thrive in his draft year. 2018 SA U18 team member Finn Betterman has impressed also over the pre-season and will be making his debut in Round 1 as well. The Glenelg leaders of Max Proud and Chris Curran will be looking to guide this team to finals and break a long drought for the Tigers. At Reserves and Under 18 level there is plenty of talent keen to impress with SA U18 members Cooper Hornsell and Brady Searle developing nicely.

The reigning premiers have an uphill start, being docked two wins prior to the start of the season for the 19th man incident in the 2018 Preliminary finals. They have also lost five premiership players to the AFL in the form of Best and Fairest Callum Wilkie, wing/forward Robbie Young, ruckman Jordon Sweet, utility Connor Rozee and small forward Boyd Woodcock. Coming into the mix to replace those will be; back from the AFL, small forward Jake Neade (Power), and mid/forward Ben Jarman (Crows). Also out of country footy and returning to the Roosters with three Mail Medals is former SA U18 captain and midfielder Campbell Coombe and key defender from Keith, Bill Laurie. Rugby convert Jack Blair from NSW also takes up the ruck space. In the trial games, we have also seen some exciting play from small forwards Keanu Miller and Frankie Szekely and winger Mason Neagle. Some of the key youngsters in the mix for the Roosters this year include tall Dyson Hilder, at around 196cm he has played in the SANFL league trials in the midfield, up forward and down back and will be a key cog in the SA U18 champs this year. Also one to watch is key position player, Karl Findlay, picked in the U18 Academy as well, this smooth and calm defender will have a his mix of school, state and SANFL commitments this year. With the Reserves also winning the flag last year there is some depth, but a number of those experienced players have left the club to play some local and country footy. This year North cannot really afford to go on a 1-6 late season run like they did last year. The nucleus of the North success has been their core of hard midfielders, and while the key positions remain unchanged, the impact of losing Wilkie could be the key. However, North will still be a real threat in 2019.

Norwood look to again be in the mix for finals after another solid offseason adding ex Port (and Glenelg) Dom Barry and former South Adelaide player Cody Szust to an already strong list. Magarey medalist Mitch Grigg again looks like he will be able to control games from the middle alongside Matthew Panos. Norwood had four of their talented youngsters drafted at the end of 2018 in Luke Valente, Jacob Kennerley, Ben Jarvis, and Kade Chandler, but their core group is experienced and tough and Coach Jarrod Cotton will be looking to go further than 2018. Ex PAC student Cole Gerloff is an emerging talent and should be a consistent member of the league side this year. The Under 18 talent at the Redlegs is again top notch and SA squad members Cameron Taheny and Dylan Stephens are real standouts who will no doubt get a taste at the next level. Both will be keys for SA’s Under 18 title defence and will be watched closely for the Redlegs.

For the first time since Port Magpies re-assignment in the SANFL they will not be led by club stalwart Steven Summerton. Taking over the captaincy and marquee spot is former Fremantle utility Cameron Sutcliffe who surprisingly knocked back his original SANFL club Woodville-West Torrens. Sutcliffe has also taken on a role as a development mentor which will aid the draftees’ development and integration into the Magpies setup. Bar Zak Butters and Xavier Duursma, Port drafted exclusively from South Australia and already have Boyd Woodcock and Connor Rozee who played in a North Adelaide premiership in the previous season. Kai Pudney dominated in U18’s level last season and will look to take the next step in the seniors, as will Martin Frederick – who impressed at the U18 South Australia championship win – and will be looking to further his development with senior football. Out of the Magpies SANFL contracted players, ex-Central District forward Dallas Hill will be one to watch, as is Matt Appleton, who played 15 league matches for North Adelaide in 2018 will be an interesting prospect. With the Magpies’ Reserves side disbanded for 2019, all SANFL contracted players that don’t feature in the league side will play for their community clubs when not required. Second year Western Australian player Jake Patmore suffered an ACL injury in a SANFL trail match against South Adelaide and will miss the season, much like ruckman Sam Hayes who suffered the same injury last season but will be looking return to the SANFL side in the near future.

It has been an interesting off season for the Panthers with some great talent snapped up with losing players Nathan Krueger to Geelong, Keegan Brooksby back into the AFL system at West coast as well as youngsters Tom Sparrow to Melbourne and Jake Tarca to Geelong. Bringing in Malcom Karpany from West Coast will be a handy addition as well as South favourite Emmanuel Irra returning from Port Adelaide, but it is the class of ball magnet Nick Liddle and Joel Cross which always makes South hard to beat. Players ready to break out include Liam Fitt who impressed with every game and Jaiden Kappler is another talent on the rise. South has some quality young talent emerging with big men Damon Freitag and Daniel Sladojevic likely to get an opportunity at the highest level.

After losing dual premiership coach Marty Mattner as an assistant coach to the Adelaide Crows, the new Sturt era will be under the tutelage of former North Melbourne and Central District premiership player Nathan Grima. Grima was recruited from Essendon Football League side Strathmore and has brought Victorian pair Tom Condon from his former side and 6ft 5in giant Josh Patullo from Footscray’s VFL team from across the border. But their season will be headlined by the return of Sturt product Danyle Pearce, returning after 258 AFL games for Fremantle and Port Adelaide and a 2006 Rising Star award to his name. The Double Blues lost star player Shane McAdam to the AFL as a Mature-age draft pick and Riley Grundy to Port Adelaide late in last year’s draft. Sturt will also miss promising midfielder Tom Lewis – a key asset in South Australia’s successful U18 carnival- to an ACL injury suffered in an early season trial match and will miss the entire 2019 season.

West Adelaide will hope 2019 can be the season the Bloods can rise back up into finals contention, with coach Gavin Colville into his second term. West welcome back Jack Oatey medallist and the captain of their 2015 premiership Chris Schmidt, partnering the return of Will Snelling back from three seasons with Port Adelaide. Snelling- a hard luck story to be delisted by Port- will be keen to build on his 2018 best-and-fairest SANFL Port season and make a big impact back at his original club. The Bloods have also recruited Dallas Willsmore from Hawthorn after he was delisted at the end of the 2018 season after two AFL games in four seasons with the Hawks. Willsmore will provide more depth in West’s engine room, as West rounded out their acquisitions with Werribee swingman Jade Cleeland and ex-Norwood defender Pat Levicki. The recruits should replenish the loss of star players Chris Burgess and Izak Rankine, who were picked by the Gold Coast Suns, and veterans Aaron Fielke, Daniel Webb, and Shannon Green.

There has been some strong ex-AFL talent added to the Eagles side this year, with Jimmy Toumpas (Port), Jesse Lonergan (Gold Coast) and Jordan Foote (Sydney Swans) providing even more class to a finals hardened outfit. With long-time coach Michael Godden departing to take up an Assistant role at Adelaide Crows, the Eagles secured Sam Lonergan as head coach in the off-season. Lonergan brings AFL and SANFL playing and Tasmanian coaching experience to the group and will be looking to have a clean slate after the difficult end to 2018 and the 19th man saga. This side looks ready for finals, and with exciting youngsters in their draft year Kysiah Pickett and Jackson Mead, the mix of experience and youth is spread well. No doubt the Round 1 clash vs 2018 Premiers North Adelaide will have an extra bite to it, with Lonergan’s team wanting to make its mark on the competition early. Midfielder accumulator James Boyd will be important, as will the class of Luke Thompson in defence.