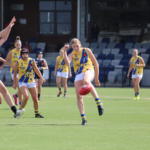 IT was not so much a choice one way or another, but passionate sportsperson Isabelle Pritchard said the decision to pick up a footy and take a chance in the sport was more about opportunity than anything else. Trying her hand at just about anything growing up, and predominantly a netballer, the now Western Jets star has made the most of that opportunity that presented itself a few years ago.

“I had a go at pretty much everything to be honest,” Pritchard said. “Netball was probably my main sport. “I didn’t start that until I was about eight so I was quite young, I played that majority of my childhood, but I had a go at everything else. “I played some basketball, played indoor soccer, I did quite a bit of swimming, etc. and water polo. “I played some cricket, really everything, but netball was like the main thing for me.”

Pritchard said she would consider going back to netball later in life as she loved the sport, but knows the growth in women’s football has been too big to ignore and something she really loved to be a part of.

“Coming from playing netball, it’s quite restricted in terms of where you can run,” Pritchard said. “I loved the freedom of footy being able to go wherever and you’re not controlled by lines on the court or anything like that. “I think I enjoy the physicality as well, being able to get in there, get under the pack and win the ball out for your team is something I really enjoy.”

Pritchard lists her strengths as her ability to win one-on-one contests, as well as the contested ball. The latter of which she only realised after a role switch at the Jets this year saw the traditional intercept marker move from half-back into the middle.

“I really enjoyed it (midfield move) because it gave me an opportunity to be a bit more proactive instead of reactive I suppose,” Pritchard said. “As a defender you’re sort of anticipating where the ball’s going to come in and try and stop them from getting a goal, whereas in the mid your role is to get it forward to try and get a goal.

“I think I really enjoyed that aspect of it, but at the same time I think even when I was playing I still had quite a defensive role, I tended to stay towards the back as that backstop position which I think was good because it gave me an opportunity to translate the things that I learnt in backline into the midfield.”

Rewinding back to the start of her footy journey just a few years ago, Pritchard first tasted football at school as part of a round robin tournament and it instigated a move to sign up for Spotswood, her local football club.

“I signed up just for a bit of fun and started playing and I really enjoyed the day (at school) so then I began playing at a local team starting up at Spotswood, so I began playing there with a few of my friends,” Pritchard said. “I just fell in love with it, kept playing and I was lucky enough to get into the Western Jets that first year and I’ve played there since then.”

Her rise through the pathway was quick but she adapted, though not without plenty of nerves along the way, becoming a regular standout in the Jets’ side.

Hold her weight she did, having grown up supporting the Western Bulldogs with her family, and her twin brother playing football “since he could basically walk”, the game was hardly foreign for her. As a red, white and blue supporter, it was somewhat fitting that running out for Vic Metro as a middle-ager last season, Pritchard was coached by Nathan Burke who would go on to earn the top job at the Western Bulldogs later that year.

“I was incredibly lucky to play as a bottom-ager in the Vic Metro against some of the most talented players in Australia. It was such a great learning opportunity I think as well being able to work, being coached by Nathan Burke was amazing.

Not only has Pritchard featured through the Vic Metro program, but has been a member of the AFL Women’s National Academy for a couple of years, something that took a while to adjust to due to a foreign exchange clash.

“I went on exchange when I was 16 for three months to France. “I actually found out that I’d got into the Academy while I was away,” Pritchard said. “I was in France and it was just before the summer that I found out and then I missed the first camp because I was away, and then I went on the second one. “It was a bit scary because everyone knew each other already and then when I went away on the second camp, I was trying to meet everyone, I was trying to get involved, find my place.

“But it was really good, and Aasta (O’Connor, AFLW Academy coach) was such a great role model and such a good coach,” she said. “It was amazing to learn from her, and also just be around such amazing talented players and some of those players ended up being my best friends, so it was really great just to be able to go away and spend some time around so much knowledge and talent and be able to try and learn as much as I can from them as well.”

Over her journey, Pritchard has been particularly looking to improve her skills and her athleticism, with the off-season of late giving her an opportunity to fine tune her fitness and speed. Someone who has always been there for the defender/midfielder is her father who she admits has been her role model throughout her childhood.

“He played football growing up as well, so he’s very passionate about it but I love it because he’s not overbearing,” Pritchard said. “When I want help from him I can ask and he’ll give it to me, but he never forces his opinion on me which I really value and I think his opinion is the most important to me, and whenever I need help I go and ask him what he thinks and he always comes up with something wise, so he’s probably been my biggest inspiration, my biggest role model.

“My brother has played footy since he was a kid and I guess that’s what sparked my intrigue into the game,” she said. “He’s always been so hard-working and humble, not just at footy but at everything he does. “My whole life I’ve just been trying to be as good a person as he is.”

Now with the AFL Women’s Draft looming large tomorrow, Pritchard said the goal for her was to just keep on improving to be the best she could be. Whilst being drafted would be a “huge goal” and an “amazing opportunity”, Pritchard said she would not stop aiming to always improve on herself.

“I mean it’s kind of crazy to think about that four years ago when I started playing I didn’t think that I would be here nominating for the draft, hoping that I would get drafted,” Pritchard said. “But it’s really exciting because it’s a huge opportunity that’s presented itself and the idea of it’s really scary. “I didn’t even know women’s football existed five years ago so it’s crazy, it’s overwhelming, but it’s also incredibly exciting and I can’t wait for the future to see what happens. “Obviously even if I don’t get drafted, I’m just excited to keep playing and keep improving.”