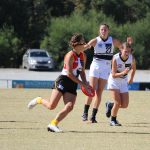 SINCE earlier this year, Dandenong Stingrays’ Isabella Shannon has known her fate for the 2020 AFL Women’s season. Unlike many of her peers, Shannon was pre-listed by the St Kilda side set to come into the top-level competition at the beginning of next season. Joined by Stingrays’ teammate and captain Molly McDonald, Shannon has followed the same pathway this year, graduating from the Stingrays, to Vic Country, to the Southern Saints’ VFL Women’s side to acquaint herself with the coaching staff and many teammates who will run out in the red, black and white next year.

Shannon initially got into football after having a kick with her father and brother, and once her local club in Mount Eliza started a girls program, the tall utility jumped at the prospect. While her talent is undeniable – pre-listed prior to her top-age year to an expansion AFLW club speaks to that – it is the close bond she has through the sport that keeps her driven to reach her goals.

“Definitely like the friendships that you make, that’s what so good about footy,” Shannon said. “There’s like 25 girls in a team so you get to make so many friends and through the rep stuff, you just know people from all over the country which is awesome.”

An area Shannon has worked on this year is her repeat sprints to try and push hard across four quarters and continually develop her game. As a player who has played in attack, midfield and defence, she has seemed to settle into the back half since taking up her role at the Southern Saints in the back-end of the season. She said the professionalism of being a member of an AFLW club and experiencing that side of sport was “awesome” and she looked forward to building her confidence throughout the season.

Shannon’s coach at the Saints, Peta Searle said the improvement shown by the 18-year-old to not only come in and play a role, but cement her spot in the side was remarkable.

“I’ve really loved watching the growth in her this year,” Searle said. “She’s come into our side and she’s now been picked as part of our best seven defenders and all the girls are now getting picked on, not what we’ve got to achieve in 2020, but what we can achieve in this finals series and definitely Isabella and Molly (McDonald) have earned their spots in our side.”

In season 2019, Shannon averaged 15.7 disposals, 2.0 marks, 4.4 tackles and 3.7 inside 50s per game for the Stingrays, predominantly playing through the midfield. She then pushed further back for Vic Country, where she averaged 11.3 disposals and 2.7 tackles per game on the Gold Coast for the AFL Women’s Under-18 Championships. While her numbers are lower at VFLW level – just the 4.5 disposals and 1.3 tackles, she has answered the call each week and played her role for the side.

With the Saints still in contention for a VFLW flag, Shannon could experience success with her new teammates before making the step up to the elite level next year.