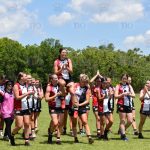 ROUND 5 of the Northern Territory Football League (NTFL) Women’s Premier League saw a familiar theme across the board with inaccuracy and big blowouts the main takeaway from the round. Pint continued their unbeaten run while Southern Districts notched up their first win of the season with a convincing performance against the struggling Wanderers.

The Southern Districts notched up their first win of the season, flexing their muscles against the lowly Wanderers who struggled to get going against the silky Crocs outfit. Inaccuracy was a key concern for the Crocs despite walking away with a 51-point win, registering a whopping 17 behinds. They could have extended their winning margin had they been more accurate in front of the big sticks but their ability to limit the Wanderers to one goal in each half enabled them to dictate the flow of the game and maintain control to secure their maiden 2020 win.

The goal scoring was shared between Kaitlyn Armstrong and Jazzmin Forwood for the Wanderers with both players walking away with a goal apiece. It was a difficult game for the side but the work of Morgan Johnston was once again key, notching up her third week straight in the bests for her efforts across the ground. Much like Johnston, Tishara Davern was back in the bests credit to her work rate across the ground while Ivana Schober was also recognised for her performance. Lateesha Jeffery notched up a milestone of 150 games, however at the time of publishing no goal scorers or bests had been released for Southern Districts.

Pint kept their undefeated record intact, with the ladder leaders proving why they are a force to be reckoned with making light work of the fourth placed Nightcliff. The home side led from start to finish but much like Southern Districts struggled with inaccuracy finishing with 14 behinds. Pint’s overall ability to shut down Nightcliff’s ball movement and attacking forays allowed them to run out comfortable winners, keeping their opponents goalless for the first three quarters.

Pint had their fair share of multiple goalkickers with Erin Lavis and Amy Chittick nailing two majors apiece to keep the scoreboard ticking over with the latter also making her way into the bests thanks to her contribution across the ground. They were not alone as Kristen Smits and Ellen-Kristine Markussen also managed a goal each to keep Pint well and truly ahead of the Tigers. Other key contributors were Cassie Henderson who once again was named among the best while in her second game for the season Jacinta Reid also made her presence felt for the victors. For Nightcliff, the goals came through Gracie Reid and Mickayla Ward with the duo the only two able to effectively hit the scoreboard. Hannah Turnbull and Andi Moliere tried gallantly for Nightcliff but simply could not do enough to stem the bleeding and apply scoreboard pressure to get the “W”.

It was a complete demolition job by the Darwin Buffettes, running out 113-point victors after keeping bottom of the table Tracy Village scoreless. The Buffettes had everything on their terms from the opening bounce and while they would be happy with the thrashing would be slightly disappointed they were not more accurate to really romp it home, recording 17 behinds. It was one way traffic throughout the game as Tracy Village struggled to find answers for the Buffettes who simply did not let up, attacking hard and stopping their opposition in their tracks.

Zoe Anderson was a menace inside 50 for the Buffettes slotting majors with great ease to add to her growing tally of goals with five on Saturday. Teammate Katelyn Hazlett also chimed in with two majors of her own as did Kylie Duggan, Delsey Ah Wang and Talia Corrie showcasing the array of options they had inside 50. Clessae Destage and Melinda Taylor also managed a goal apiece as players popped up from everywhere to hit the scoreboard in their victory. Dominique Carbone was electric for the Buffettes and while Johanna Dodsworth did not hit the scoreboard this week, she was still a solid contributor across the ground. Despite the big loss Zhoe Clarke backed up her efforts from last week with another strong performance while Melina Pohl, Tanya Eagle and Kahla Dumbris were all named in the best for Tracy Village.

Continuing the theme of one-sided affairs, St Mary’s notched up their fourth win, dominating the seventh placed Magpies at every possible turn. It was an impressive effort from the Saints who managed to keep Palmerston to a mere two points for the entire game credit to their defensive pressure and individual ability to keep the ball rolling forward and attack the scoreboard. There is no denying that St Mary’s had their opportunities to inflict more pain finishing with an inaccurate 5.11 on the scoreboard, an area they will hope to tidy up, but overall the game was played on their terms.

The mantle of multiple goalscorer fell to Danielle Ponter with the 20-year-old booting two majors for St Mary’s in their win and also earning a spot in their bests. Tesharna Maher slotted a goal while Jasmine Anderson continued her recent hot form in front of the big sticks with a major to make it three consecutive weeks where she has hit the scoreboard. Michaela Long also bobbed up for a goal to get her side over the line. Ashlea Melnikas plied her trade across the ground as did Annabelle Shannon and Isabella Shannon in their first game of the season. A familiar face in Iesha Ronberg stood up for the Magpies in the loss while Vanessa Mounsey and Kiara White worked in overdrive. Laquoiya Motlap was also named in the bests in her first outing. 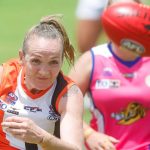 ROUND 3 of Northern Territory Football League (NTFL) Women’s saw Nightcliff keep their winning record intact with a come-from-behind victory while Southern Districts and Waratah played out the first draw of the season. Tracy Village had a bye this week, keeping them stuck at the bottom of the ladder while Pint flexed their muscles to claim an impressive 44-point win.

St Marys were on-song from the opening bounce, skipping out to a handy lead in the first term thanks to a two goal to zip start and never really looked back. Despite having a wealth of opportunities to hit the scoreboard inaccuracy plagued the Buffs who simply could not find their range while St Marys made it count where it hurt, on the scoreboard. In the end it was a case of too little, too late for the Buffettes who strung two goals together but could not overrun their opponents as St Marys brought home a 10-point victory.

There were no multiple goal kickers for either side, instead the scoring was scattered across a number of players with Claudia Whitfort once again popping up for St Marys and proving to be a menace in and around goals. Whitfort was also named amongst the best for her performance against the Buffettes while teammates Alana Coombes and Jasmine Anderson boasted a similar stat line with a goal and nod in the bests. Ashlea Melnikas returned to the goal kicking brigade this round to take her tally to four for the season while Madison Ludwig also found the big sticks. For the Buffettes, Martha De Santis showed what she is capable of snagging a goal while Zoe Anderson continued her hot form in front of goal with a major of her own. Bianca Stokes impressed in her first outing for the Buffs while Kiera Kurnoth settled into the line-up and earned a spot amongst the best.

The first draw of the season took place on Saturday with Southern Districts and Waratah unable to be split at the final siren. After a sluggish first quarter, Waratah put the foot down in the second to steal the ascendancy heading into the main break thanks to three unanswered goals. However they plateaued in the second half unable to find a major and only registering one point  while the Crocs found their mojo in the final term to pile on two goals and secure a draw.

Michala Shaw made her presence felt in front of the goals nailing two majors in her first appearance of the season for the Crocs, while Tayla Thorn managed a goal of her own and was named amongst the bests. The only other goal scorer for Southern Districts was Kelsey Patterson. Ebony Miller was recognised for her four quarter performance for the Crocs as was Indianna Hickling and Makayla Siddons. The scoring was shared in the Waratah camp as Caitlin Couch, Monet Hunter, Danica Pedersen and Jenna Singh all slotted one with the latter making it three weeks straight she has hit the scoreboard.

A blistering second term from Pint all but gifted the home side the win, blowing the Magpies out of the water, piling on five goals to nothing. Down by a point at the first change Pint came out with a real pep in their step in the second and could have inflicted more scoreboard damage had they been more accurate slotting four behinds to accompany their five goals. The Magpies had their chances to strike but simply could not find the big sticks and suffered from inaccuracy much like Pint.

Jessie Baumer was a menace inside 50 for Pint kicking a bag of three while Gemma Cusack navigated the goals with ease in her first appearance for the season piling on two majors. Cara Evans and Jasmyn Hewett also popped up with two goals apiece in a collective effort for Pint with the latter also named amongst the bests for her performance. Cassie Henderson was influential for Pint as was Amy Chittick. For the Magpies their goals came from Arthurina Moreen and Tyra McKay as the duo slotted a major each while Iesha Ronberg was once again named in the bests for her efforts across the ground. Billie Byers and Shanoah Leedie also plied their trade in the losing side, working hard for every possession.

A dominant final quarter from Nightcliff saw the current table toppers come from behind and clinch a victory against Wanderers. Unable to generate their usual flow in the second and third terms, they ramped up the pressure in the last quarter to wrestle the game back onto their terms and stop the Wanderers from scoring. Nightcliff managed to add three goals to their half time tally as opposed to the Wanderers mere point, ultimately handing them the 18-point victory and keeping their undefeated record intact.

Although goals were hard to come by for some, that was not the case for Wanderers forward Kaitlyn Armstrong who slotted three majors to keep her side in the contest. She was the only real avenue to goal, making the most of her opportunities that came her way up forward. Armstrong was named amongst the best as was Morgan Johnston for the second consecutive week. Georgia Halkitis backed up her performance from last week while for Nightcliff a couple of familiar faces were once again at the forefront of the action with Lauren Gooden finding the big sticks twice. She was not the only one to kick a bag with in-form goal kicker Emma-Lou Wolsey slotting two with teammates Jacqueline Anyon-Smith and Gracie Reid also adding some scoreboard pressure. Hannah Turnbull earned a spot in the bests as did Laura de Hommel in what was a gritty performance by the ladder leaders.