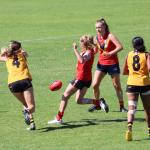 GLENELG took out the 2021 SANFL Women’s premiership on Saturday afternoon, bossing the game to come away 5.10 (40) to 2.5 (17) victors over West Adelaide. An even team spread helped the Bays claim ultimate glory, with a mix of experience and youth observed across the squad. 17-year-old Brooke Tonon was among the younger prospects to play a part, setting up well in the back half and even enjoying an early tussle with fellow state Under 19 representative, Zoe Venning.

Tonon is the prospect placed under our SANFLW Player Focus microscope this week; we run you through her game quarter-by-quarter, and bring you the key stats out of her Grand Final showing.

Starting in defence, Tonon was given an early taste of the Grand Final intensity when she dived on a ground ball and was sieged upon, conceding a holding the ball free kick. Her state Under 19s teammate Zoe Venning earned the possession for Westies, and proved a testing matchup in the first half.

Tonon got her own game going shortly after, backing her pace on the wing to burn an opponent and kick long down the line. She was also clean off the deck to flick a handball up to a runner inside defensive 50, showing she can play both sides of the contest.

The 17-year-old often lurked around for handball receives and knew when to run off her opponent, but was forced to kick under pressure and overcooked some of her disposals. Still, she matched Glenelg’s aggressive forward run and looked to take the game on that way, finishing the term with three kicks and one handball.

Term two was somewhat of an ‘almost’ term for Tonon, who was done in by dodgy bounces of the ball and heavy pressure from Westies. She remained involved in the play, able to get her hands on the ball in congestion despite being wrapped up or knocked off it quickly as the intensity lifted.

She rose to the level as the quarter wore on, laying a hard joint tackle on Venning, before preventing a West Adelaide shot on goal by applying good body to the kicker. She also forced a ball out of bounds on the wing and did the tough stuff, but was not able to provide her usual drive on the outer – finishing with one kick and one handball.

After being crunched in the opening exchanges of term three, Tonon bounced back well and got her usual game back up-and-running. She positioned a little deeper in defence and cut off a long kick inside defensive 50 as Westies broke quickly, holding the relieving mark.

She invited pressure with the resultant kick, but was sure to tighten that area of her game with a couple of better efforts via the kick-ins, sending one long outside 50 and the other short to an easy target.

Tonon’s speed came to the fore with her last two touches; the first was a handball receive at the front of a defensive 50 stoppage, which she used to power away and kick long, while the second was a clean gather in the corridor before dishing off a quick handball all in one motion. The latter contest was a particularly key ball to be won, with Tonon’s reading of the play helping Glenelg maintain possession and territory. She finished a productive quarter with four kicks and one handball.

While Glenelg was not made to absorb as much pressure in the second half, Tonon finished solidly and setup shrewdly behind the ball. She attacked the contest well when called upon, taking a full-chested intercept mark on the wing, before kicking quickly over the top.

Her last kick for the day came from a last touch turnover at half-back, which she used to boot long down the line to a contest. Tonon’s last touch overall was a handball in the defensive 50, mopping up over the back with poise and dishing off quickly to set the Bays on the rebound.

There was not too much to be done in the end as the clock ran down, but Tonon capped her day positively and played her role superbly. She managed two kicks and one handball in the final term.

Tonon has shown plenty of development in 2021 to become one of South Australia’s most promising Under 19 prospects, performing well at each level and in a variety of roles. Having cut her teeth on the wing, the 17-year-old has also been able to impact in defence with a good balance of line-breaking run on the rebound and defensive acts when required. She was able to open up the hotly contested Grand Final at times but did not shy away from the tough stuff, which should prove another handy tick for her versatility. Her positioning behind the ball as a sweeper and reading of the flow of play saw her win the ball in a variety of ways, able to intercept or be released on the outer.