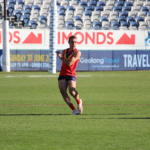 IN the build up to football eventually returning, Draft Central  takes a look at some of this year’s brightest names who have already represented their state at Under 17 or Under 18s level in 2019.

While plenty can change between now and then, we will provide a bit of an insight into players, how they performed at preseason testing, and some of our scouting notes on them from last year.

Next under the microscope in our AFL Draft watch is versatile Glenelg product Luke Edwards, who is eligible to be drafted by Adelaide under the father-son rule in 2020 given his father, Tyson‘s 321-game career with the Crows.

One of six Tigers to be named in the South Australian Academy Hub, Edwards is arguably the most credentialed of the lot having already featured at SANFL Reserves level, and in all four of South Australia’s Under 18 fixtures last year as a bottom-ager.

In 2020, the 187cm prospect will be looking to ply his trade more prominently through the engine room, utilising his solid frame and outstanding contested ball work after proving his worth as a rebounding half-back throughout 2019.

A lower back niggle prevented Edwards from completing a full preseason and participating in the fitness testing day, though he will be raring to go should the class of 2020 get back on the park.

Preferred position… “(Midfield) is where I’ll probably be playing mostly through the state champs. But it’s obviously good to be able to be that versatile type of player – go through the mid, down back.

“I enjoy playing through the mid probably more, I find it easier than playing down back so hopefully through the mid a little bit more, find more of the ball which would be good.”

2020 goals… “Hopefully I can play some senior footy, play a couple of League games if that’s before state champs or after state champs. “Obviously I’ve got my older brother (Jackson) who’s come down again so if I could play with him as well that’d be pretty cool.

“And hopefully by the end of the year, get drafted but we’ll just wait and see what happens with that.”

Working on… “Probably just that contested marking if I want to go down back or if I want to go up forward. “Just being able to be that player who can run and crash a few packs like Kaine Baldwin and take some big marks, that’d be pretty cool.”

The potential Adelaide father-son has composure beyond his years and looks a versatile type. Starting in his usual half-back role, Edwards showed great poise in his disposal coming out of defence and worked hard to impact the play further afield once he had released the ball himself.

His intercept marking game was also sound, reading the ball well in flight to get in the right position on defensive wing. He is the accumulating type in the backline, but looks a different player once thrown into the midfield with his strong hands and frame allowing him to play that inside game.

Adelaide fans would want to be keeping the potential father-son’s progress on the down-low, but he keeps on showing good signs of form. Edwards’ quick and clean hands in congestion were outstanding, flicking the ball out effectively to his runners and staying strong through the hips under tackling pressure.

He looked at home through the midfield but also chimed in down back with some rebounding kicks and showed good penetration when going long.

One of few bottom-agers in the SA squad but was again impressive in spurts. He found a spot in the back six throughout the carnival, but will become a good midfielder in time with his clean hands and strong frame.

Edwards had a shaky moment early with a pretty bad turnover by foot on defensive wing, but would make amends later in the game with some clean gathers off the deck and improved composure inside defensive 50 as the game wore on.

The son of former Adelaide champion Tyson, Luke is a potential father-son option for next year, but speculation continues to grow that he may opt to nominate for the open draft.

He again found himself behind the ball on Friday, intercepting, rebounding and often starting dangerous scoring chains. He took an excellent intercept mark in the third term which set up a goal for his team at a vital time.

At 187cm he is a good size which allows him to compete strongly one-on-one against the top-aged boys. With 18 disposals, Edwards had no issues finding the football.

He generally used it well, playing across half-back (at times stationing himself in ‘the hole’ in-front of the key forwards) and also in an inside midfield role. Dribbled home a goal in the third term in an attempt to kickstart SA after half-time.