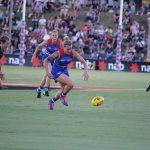 ROUND 9 of Victorian Football League Women’s (VFLW) was chock full of big games, with the most surprising result seeing Richmond dealt their first loss of the season among big wins to Collingwood and Southern Saints to sit comfortable in the top two. Meanwhile, Casey had their fourth loss on the trot and Carlton almost delivered a shock win over NT Thunder.

It seemed the Williamstown Seagulls never had a chance when they took on the Saints to open Round 9, going down by a whopping 52 points in a massive win for the Saints side. A four goal first term all but set up the win for the Saints, dominating every stoppage and denying the Seagulls any access to their forward half. The Saints were clinical in their efforts even after a slow second quarter, drilling goals home with ease as the Seagulls struggled to maintain possession. Courteney Munn, Caitlin Greiser and Jacqui Vogt kicked two apiece in the victory, aided by big matches from Alison Drennan (27 disposals, six tackles), Rhiannon Watt (21 disposals, 25 hitouts) and Cat Phillips (16 disposals, 12 tackles). Watt was evenly matched in the ruck by Williamstown’s Jedda Heard (20 hitouts, 11 touches) but the Seagulls were unable to benefit off the taps and drill forward. Mo Hope had another prolific game for the losing side, racking up 21 touches while Megan Williamson kicked the Seagulls’ only goal.

Despite the scoreline, the closeness of this match was palpable with neither side able to maintain a lead across the four quarters. A slow quarter from Geelong saw the Hawks take an early lead, but the Cats were persistent to draw ahead by one point at half time, proving they still had plenty in them. While the third term saw both sides draw even once more, opportunities at goal were floundered as both teams had the ability to draw out the lead but ultimately both kicking more behinds than goals. Geelong’s final quarter effort was what ultimately won them the game, creating a defensive unit like that of their second quarter to make it hard for Hawthorn to score. While Geelong came out the lucky winners with a final quarter goal, the Hawks certainly put them through their paces. Hawks’ Bec Beeson was dominant as ever with 25 disposals, five marks and four tackles, while Rosie Dillon picked up 24 touches, eight tackles and a goal. Lou Wotton dominated the hitouts, racking up 33 hitouts, well aided by Abbey Tanner with 15 hitouts and five tackles. For the Cats, Richelle Cranston made her mark with 28 disposals and two goals, while Rebecca Webster managed 22 touches and eight tackles and Madeleine Boyd finished with 13 touches and six marks.

It was a disappointing fourth loss in a row to Casey on the weekend, who despite closing out the margin in the final term were unable to get the job done against Melbourne Uni. While Uni put in the hard yards early with four goals in the first, the Demons were not going to let the Muggars get away with a win easily, showing some of the grit they displayed in the early stages of the season and only letting one major past them for the rest of the game. Casey’s bad luck continued, however, with the side inaccurate in front of goal when they had the opportunity to even up the ledger. Melbourne Uni’s Jess Duffin and Kate Gillespie-Jones dominated possession, collecting a whopping 39 and 33 disposals and collecting a combined 21 marks and 23 tackles, while Katie Angelis kicked two goals from 10 touches. For Casey, Libby Birch (24 disposals, nine tackles, one goal) and Eden Zanker (21 disposals, seven marks, 16 hitouts and one goal) paired well to provide a target inside 50.

Despite an even start, it seems the Bombers may have gotten ahead of themselves after the first term, letting in three goals in the second as the Pies took the footy and ran with it. While the Bombers may have become complacent, the Pies stood strong and delivered their eighth win in a row, proving they have what it takes to go all the way. Jaimee Lambert added three more goals to her season tally, shooting up to the top of the goal kicking leaderboard and causing headaches to Essendon’s defensive unit with her ability to find the ball and create something out of nothing. Lambert also racked up 25 touches (20 kicks) in her best on ground effort, while Chloe Molloy (17 disposals, one goal) and Mikala Cann (10 disposals, nine tackles) also provided valuable options around the field. For Essendon, Shae Audley (18 disposals, 10 tackles), Georgia Nanscawen (18 disposals, 13 tackles) and Maighan Fogas (11 disposals, seven marks, one goal) put in the hard yards to apply pressure on the winning side, while Simone Nalder starred in the ruck with 40 hitouts.

It was a slow start for Thunder that almost saw Carlton come away with a massive win in the Northern Territory, before a four goal final quarter saw the Thunder run the Blues out of the match. While Carlton had the lead for much of the game, it was the determination of the home team to get the job done that got them over the line, leaving a disappointed Blues outfit to rue missed opportunities. While Carlton had the opportunity to seal the deal in the final minutes but couldn’t convert, Thunder had plenty of missed opportunities early that they fortunately were able to brush aside and continue on. While Carlton may have come home without a win on the board, the side does come home with a convincing effort in the back of their minds as they come into the latter end of the season and the confidence in their six Round 9 goalkickers. Anne Hatchard (36 disposals, four tackles), Danielle Ponter (three goals, four tackles) and Gemma Cusack (two goals) starred for Territory, while Gabby Pound (29 disposals, seven marks), Jess Hosking (22 disposals, five marks, five tackles) and Breann Moody (25 hitouts, 15 touches, five marks) were among Carlton’s best.

It was a different looking Richmond outfit this weekend with another massive name lining up for her first in the yellow and black, with Sabrina Frederick joining the side for the first time since her departure from Brisbane Lions AFLW in 2018. However the match just didn’t go the Tigers’ way, with the Bulldogs hungry for the form they had in the early stages of the season and ready to fight for it. It was a very different side to the usually clinical Richmond over the weekend, with a disappointing loss to the Bulldogs proving no side can afford to be complacent in the competition. It was the Tigers’ first loss for the season, seeing them stay in third but lose the winning edge they have had across the board this season. However, full credit to the Bulldogs for shaking the Tigers and only letting in the one goal in the first half. The Tigers’ usually meticulously accurate forward line had massive issues across the board, kicking six behinds in the second term alone, more than the Bulldogs kicked all match. Kimberley Rennie was up in the contest with two goals to her name, while Hannah Scott (25 disposals, four marks) and Bailey Hunt (18 disposals, five tackles) used the ball freely credit to the tackling efforts of Tayla Dinuccio and Ellie Gavalas (10 tackles apiece). For the Tigers, Kate Dempsey had 21 touches and five marks, aided by Grace Campbell and Grace Egan who combined for 17 tackles.