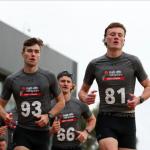 THERE has been plenty of debate when talking about potential AFL prospects pertaining to the differences between judging ‘athletes’ against ‘pure footballers’. There is an argument that fitness testing should be taken with a grain of salt and that the eye test is most important, but when it comes to players being drafted – especially in the first round – prospects are often at the pointy end in at least one fitness test.

For anyone still unfamiliar with the main fitness tests conducted during preseason and at the AFL Draft Combine, they are as follows:

Last year’s number one pick Jamarra Ugle-Hagan excelled in the 20m sprint and vertical leap tests, with his on-field speed off the mark and jump at the ball highlighting just why he excelled at those tests. The combine, if anything, gives reassurance that those traits are indeed elite and will help try and separate talents like Ugle-Hagan from any other key forwards in that year’s crop. Athleticism is very important in modern football, with players quicker and bigger than what most talented youngsters are used to at the development levels. One club which has seemingly identified this in modern times is the fast-rising Essendon Football Club.

Since 2014, Essendon seems to have had a clear strategy with the types of players they have looked at with their high picks. Below is a list of the Bombers’ top 40 selections since 2014 and which tests those players excelled at. In a lot of cases, they were top 10 in those tests at the end-of-year combine.

Pick 6 – Aaron Francis
(Didn’t test but like Laverde, athleticism was a highlight in games)

There is one big outlier here and that’s one of this year’s Brownlow contenders in Darcy Parish, who was only average in test results during his draft year. This could be seen as the biggest clue as to why athletic testing shouldn’t be so important, but it can also be argued that one of the main reasons for Parish’s form is due to improving his running capacity to an elite level.

Even their most recent mid-season selection, Sam Durham tested well for vertical leap and endurance, so its no surprise at least in Essendon’s case that athletic traits are a huge influence in whether the player gets taken. The current favourite for the Rising Star, Nik Cox has taken the competition by storm with his mix of athleticism and height, with that height another factor in the early Essendon selections. It was a matter of time before Cox got his nomination for the Rising Star award and in retrospect, we should have all seen his selection by Essendon coming considering all the traits he possesses are key indicators in the Bombers’ recent draft strategy.

Using this history, we can even try to narrow down the possible field of players that Essendon will look at with its first round pick in 2021. A trio of Sandringham Dragons instantly come to mind with Campbell Chesser, Josh Sinn and Finn Callaghan. All three players tested well for the 20m sprint and vertical leap during preseason, highlighting their power and athleticism. With all measuring at over 185cm, they even fill a midfield need for the Bombers. They have another prospect right under their noses in Josh Goater who made his Essendon VFL debut not long ago and is an athletic beast. His speed and leap tests were all elite and at 190cm, he would be another Essendon style selection.

The modern footballer is taller, faster and can run all day, and it is getting harder and harder for pure footballers to make it at the top level. If young, pure footballers can start to develop athleticism in their game, even if it’s an elite endurance base, that’s at least a start in the right direction.

Height used to be a detractor for clubs but now with the likes of Caleb Daniel, Kysaiah Pickett, Brent Daniels and Anthony McDonald-Tipungwuti, that is no longer the same obstacle for potential draftees as it used to be – though you also need to have that speed and class. If you are small and have the athletic traits and determination to make it as an AFL player, then you will be on the right track. If you are tall and have those traits, your chances of making an AFL list are even higher.

Fitness testing is an important tool, not just for clubs and recruiters, but also for up and coming players – especially those at the very early level. I’m hopeful coaches of junior football are able to set up some of these tests to help young players find their best traits, enhance them and embrace them. Understandably, it takes time, money and effort on their part and not every junior club or parent has that available. Programs such as Rookie Me, the official fitness testing partner of the AFL, allow junior athletes to experience professional environments at an early age, proving another handy head-start for budding footballers.