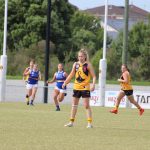 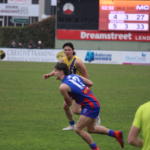 OAKLEIGH Chargers’ midfielder Lochlan Jenkins is the Round 16 Draft Central Player of the Week for NAB League Boys, taking out the Facebook vote against Greater Western Victoria (GWV) Rebels’ Jay Rantall. Jenkins picked up a round-high 35 disposals for the Chargers in their win over Western Jets, and becomes a remarkable fourth Charger to be nominated as Player of the Week for 2019. He joins the likes of Noah Anderson, Matt Rowell and Trent Bianco – all of whom were unavailable in the weekend’s match due to a mixture of school football and injury, which allowed Jenkins to step up and play a pivotal role in the midfield.

The 177cm bottom-ager amassed 35 disposals, two marks, five tackles, 10 inside 50s and booted a goal in his clear best performance for the year. His previous highest disposal and inside 50s tallies were 27 and six respectively. In season 2019, Jenkins is averaging 18.8 disposals, 2.1 marks, 2.1 tackles, 3.1 inside 50s and 1.0 rebounds, whilst booting 3.3. He has played every game this year as a bottom-ager and looms as an important player in the Chargers’ line-up for next season, as well as the looming finals series. Jenkins also becomes only the second bottom-ager to be nominated for Player of the Week after Sam Conforti in Round 7. 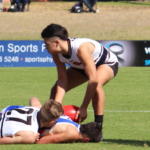 NORTHERN Knights’ Josh D’Intinosante has been awarded the Draft Central Player of the Week for Round 14 after a sensational six-goal haul – five in the first half – against Murray Bushrangers for the Knights to overcome them at Shepparton on the weekend. D’Intinosante won the Facebook poll against Sandringham Dragons’ Angus Hanrahan, and becomes the first metropolitan-based player to win in three rounds after metropolitan sides represented nine of the first 11 nominations. The forward-midfielder also becomes the first Northern Knights player to be nominated, and helping the Knights become the fifth metropolitan club to be nominated.

On the weekend, D’Intinosante racked up 18 disposals, four marks, six tackles and three inside 50s, but most importantly, six goals from seven scoring shots. His first five kicks on the day were goals, helping the Knights race away to a fast start and secure a crucial victory over Murray who were closing in on their eighth spot. The versatile player missed out on final selection for Vic Metro, but has put together a really consistent season for the Knights, averaging 19.9 disposals, 4.9 marks, 6.3 tackles and 3.8 inside 50s. D’Intinosante has also booted a goal in all bar two of his 12 games, including 10 in the past two games to record 21.16 for the year and sit equal second on the competition goalkicking list.

MURRAY Bushrangers mid-forward Jye Chalcraft has taken out the Draft Central Player of the Week for NAB League Boys in Round 12 after winning the tightest ever Facebook poll for our Player of the Week. Chalcraft polled 822 votes, three more than Gippsland Power’s Sam Berry (819) in the tightest run race of all time. The Murray Bushrangers top-age player became the first Murray player this season to be nominated for the award, and the second player from a country-based side following Sam Conforti‘s nomination in Round 7.

In Murray’s low-scoring win over Bendigo Pioneers, Chalcraft amassed 33 disposals – 17 kicks, 16 handballs – one mark, five tackles, four inside 50s and two rebounds. It could have been an even bigger game had he managed to convert a few opportunities on goal, finishing with three behinds, far from alone with the Bushrangers booting a very inaccurate 3.22 (40) in the win. In season 2019, Chalcraft has averaged up 20.9 disposals, 2.8 marks, 4.4 tackles and 2.8 inside 50s, while slotting six goals and nine behinds from his 15 scoring shots. 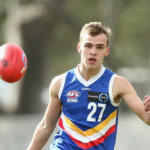 A SEVEN-goal haul to Eastern Ranges’ Jordan Jaworski has seen the forward earn the Draft Central NAB League Boys’ Player of the Week nomination for Round 10. Jaworski becomes the third Eastern Ranges’ player this season, equalling fellow metropolitan side, Oakleigh Chargers for the most nominations this season. Jaworski’s 18-disposal, nine-mark, two-tackle and seven-goal game – the most goals kicked by an individual this season in the competition – saw him easily nominated, and then win the Facebook poll against fellow goalkicker, Oakleigh Chargers’ Jamarra Ugle-Hagan who booted five goals himself.

The game was just Jaworski’s third for the season, booting three goals in his first two games that came against Brisbane Lions Academy in Round 4, and Geelong Falcons in Round 9. He is averaging 14.3 disposals, 5.7 marks, 3.3 tackles, and now 3.3 goals. Jaworski follows the nominations of teammates, Mitch Mellis and Zakery Pretty earlier in the season, and snaps the back-to-back nominations by Western Jets. The Player of the Week nominations have been dominated by metropolitan sides this season, making up eight of the 10 nominees. 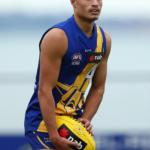 WESTERN Jets’ captain Lucas Rocci has earned the nomination for Player of the Week for his superb effort in defence over the weekend. The Jets knocked off the Bendigo Pioneers at Downer Oval, and Rocci led from the front in his best game to date. Rocci claimed the Draft Central Player of the Week spot after winning the Facebook poll against Sandringham Dragons’ Kyle Yorke.

Rocci finished the outing with 34 disposals at 76.4 per cent efficiency, and of which 35.7 per cent were contested, as well as 12 marks, one clearance, one inside 50 and 12 rebounds. Coming into the match, Rocci had averaged the 13.7 disposals, 3.3 marks and just under two rebounds per game, but an increased role in the defensive half saw him star in the Jets’ victory. His nomination made it back-to-back nominations for the Western Jets after Darcy Cassar was the Draft Central Player of the Week in Round 8. He also becomes the seventh Metropolitan player to be nominated this season. 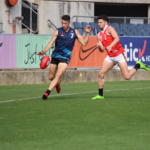 WESTERN Jets’ Darcy Cassar has earned the nomination for Draft Central Player of the Week in the tightest Facebook poll of the year. Cassar polled 53 per cent of the vote compared to Calder Cannons’ Ned Gentile, with more than 2000 votes cast between the pair.

Cassar racked up a season-high 41 disposals, the third most of any player this season, while maintaining an elite disposal efficiency of 82.9 per cent. He won 38.5 per cent of his possessions in a contest and took 12 marks, laid four tackles, and recorded two clearances, one inside 50 and had eight rebounds. Cassar becomes the sixth Metro player to earn a nomination, but the first from a club other than Oakleigh Chargers or Eastern Ranges. 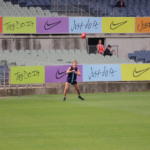 AFTER an impressive win over Gold Coast SUNS Academy, Eastern Ranges’ inside midfielder Zakery Pretty has earned the Draft Central Player of the Week title for Round 5. The Ranges midfielder has enjoyed a solid season this year, and he was the standout ball winner in the Ranges’ 59-point win over the SUNS at Trevor Barker Beach Oval on Saturday. He joins teammate Mitch Mellis as Eastern representatives, making it four of the five players from metropolitan sides this year. Noah Anderson and Matt Rowell are the other two Victorians (both from Oakleigh Chargers), while Tom Green earned the nod last week from the GWS GIANTS Academy.

Pretty won the Facebook vote against Calder Cannons’ Brodie Newman, after collecting 37 disposals at 55 per cent contested and with 70 per cent efficiency. He also took one mark, had eight clearances, seven inside 50s and booted a goal in the victory. In his four games this season, Pretty has not registered below 19 disposals, averaging 26.3 disposals, 2.3 marks, 3.5 tackles, 6.5 clearances and 4.8 inside 50s for the Ranges. He was also named in the extended Vic Metro squad, averaging the equal most disposals of a Metro player in the first game, totalling 19, as well as two mars, six clearances, three inside 50s and a goal.

FOR the first time in Player of the Week history, a player representing a non-Victorian club has earned the gong in the NAB League Boys competition. With the introduction of the five academy teams and Tasmania, it was bound to happen, and just three weeks into the season, GWS GIANTS Academy member, Tom Green has been voted in as the Draft Central Player of the Week for Round 4. Green had a massive 38 disposals and 13 clearances, as well as three marks, six tackles, three inside 50s and one rebound in the GIANTS’ win over Northern Knights at Trevor Barker Oval on Saturday morning.

Green joins Oakleigh Chargers pair, Matt Rowell and Noah Anderson as AFL Academy players on the list of winners so far this season, as well as in-form Eastern Ranges mid-forward Mitch Mellis. Like Rowell and Anderson, Green is a potential top 10 pick, and has averaged a whopping 31.7 disposals and 10 clearances per game in his three matches so far, as well as 3.3 marks, 4.3 inside 50s, 3.7 tackles, 2.0 rebounds and has one goal to his name. 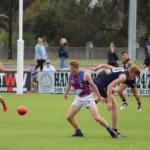 FOR the second time in three weeks, an Oakleigh Chargers’ dynamo was recognised as the Draft Central Player of the Week. Potential number one pick, Matt Rowell won the Facebook vote against Tasmania Devils’ Mitch O’Neill after both players had terrific games over the weekend. Rowell joins teammate, Noah Anderson and Eastern Ranges’ Mitch Mellis as the nominations for the 2019 season thus far. Rowell played in a losing Oakleigh Chargers outfit against Sandringham Dragons, but was the clear standout with an impressive defensive game through the midfield, while also providing an option around the ground.

Rowell picked up 31 disposals, seven marks (one contested), eight clearances, four inside 50s and three rebounds, while also laying 11 tackles in the Chargers’ 10-point loss to the Dragons. Impressively, Rowell had just six handball receives in the game, as well as 19 contested possessions showing a clear desire to win his own ball and be the one giving it out to teammates in space. While the talented midfielder will spend most of the season at Carey Grammar for school football, and Vic Metro for the National Under 18 Championships, it is clear he will be a vital cog in Oakleigh’s charge for the premiership later in the year.