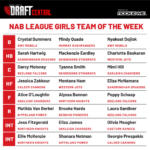 IN a new-look amalgamation of Draft Central‘s Team of the Week and player notes, we name our Round 1 NAB League Girls’ Team of the Week and explain why each player has been chosen. The 24-player team returns with three emergencies this year, and it was an even spread across the board. All notes are opinion-based of the individual Draft Central writer. Round 1 winners, Oakleigh Chargers, Northern Knights and Geelong Falcons all had three players in the Team of the Week, while fellow winners, Dandenong Stingrays, Greater Western Victoria (GWV) Rebels and Western Jets had two apiece. Narrow losers in Round 1, Calder Cannons and Sandringham Dragons had two each as well, as did Gippsland Power, while Bendigo Pioneers, Eastern Ranges and Murray Bushrangers had the one representative. Factoring in emergencies, Oakleigh Chargers had the most players overall with four, while Sandringham and Western moved up to three.

Crystal Summers (GWV Rebels) – 13 disposals, 5 marks, 3 tackles, 1 inside 50, 6 rebounds
The rebounding defender was lively throughout the contest, being a constant threat coming off half-back and pushing up the ground to be a key reason behind the Rebels’ success on the weekend. She was calm and composed with ball-in-hand and generally made the right decisions as one of the standouts.

Mindy Quade (Murray Bushrangers) – 9 disposals, 2 marks, 1 tackle, 1 inside 50, 8 rebounds
Her vision off half-back and spotting the ball in transition was a highlight, as she stood up under fierce pressure from the Chargers during the Bushrangers’ loss. She was often the first to intercept and disrupted the offensive flow inside defensive 50.

Nyakoat Dojiok (GWV Rebels) – 10 disposals, 3 marks, 7 tackles, 2 inside 50s, 2 rebounds
Always having more impact than the statistics might suggest, Dojiok had a number of impressive runs down the ground and took the game on with eye-catching speed and evasion. She still has plenty of development left in her, but has clearly improved over the past couple of seasons and is hard to stop when she gets going.

Sarah Hartwig (Sandringham Dragons) – 14 disposals, 5 marks, 1 tackle, 2 inside 50s, 4 rebounds
The standout player on the day despite being on the losing side, Hartwig was a force in defence with a number of intercept marks and rebounds, with one passage of play in particular standing out where she hit the ball at full speed, collected it cleanly, sidestepped an opponent and kicked neatly inside 50.

Mackenzie Eardley (Dandenong Stingrays) – 9 disposals, 2 marks, 5 tackles, 4 rebounds
The centre half-back certainly stood tall in the back six despite being a bottom-ager, taking a number of contested grabs, or providing a contest where she was able to calmly clear the ball under pressure. She also laid a massive tackle to win a free kick and it led to her side kicking a goal off that chain of possessions.

Charlotte Baskaran (Western Jets) – 19 disposals, 1 mark, 7 tackles, 4 inside 50s, 5 rebounds
A clean user of the ball, Baskaran would roam up and down the ground providing great service between the arcs and dropping back to help her defenders with the natural half-back another bottom-ager in the side.

Darcy Moloney (Geelong Falcons) – 28 disposals, 6 tackles, 2 inside 50s
She was a force in midfield for the Falcons during their win, often releasing teammates in space with her run and carry and quick handballs to open up passages of play down the field. A dominant player early, Moloney finds space where very few can and is quick to release by hand or foot, and equally as damaging defensively, laying some big tackles.

Tyanna Smith (Dandenong Stingrays) – 26 disposals, 4 marks, 5 tackles, 6 inside 50s, 2 rebounds, 1 goal
Absolutely outstanding performance, particularly in the second quarter where she constantly attacked going inside 50, then snapped one of the goal’s of the round close to the boundary line. Also did a number of defensive things right with some big tackles around the ground.

Mimi Hill (Oakleigh Chargers) – 29 disposals, 2 marks, 3 tackles, 5 inside 50s
The captain starred in her side’s big win over Murray with a second-high round of 29 disposals, and was often seen pumping the ball inside 50, showing clean hands and precision disposal. One of the top performers across the entire weekend.

Jessica Zakkour (Calder Cannons) – 18 disposals, 2 marks, 8 tackles, 2 inside 50s, 3 rebounds, 2 goals
Rotated between midfield and forward, often sneaking out the back to find space and capitalise, whilst showing some terrific defensive pressure. Was arguably Calder’s best in the narrow loss to Northern, and found plenty of the football while laying eight tackles.

Montana Ham (Western Jets) – 19 disposals, 7 marks, 2 tackles, 5 inside 50s, 3 rebounds
Got our full votes for her performance in Western’s win over Bendigo, looking impressive across the ground with her movement and ability to drive the ball forward in transition. She seemed to be everywhere on the ground and despite being a bottom-ager racked up a game-high 19 touches, and had the play of the game with a multiple-bounce effort down the wing kicking forward which almost led to a goal.

Eliza McNamara (Sandringham Dragons) – 20 disposals, 3 marks, 8 tackles, 6 inside 50s
Played between midfield and half-forward, McNamara had the most disposals on the ground in Sandringham’s loss to the Rebels. Her defensive pressure and running ability is elite, and she just keeps pushing throughout the four quarters to try and do everything she can for her side. She worked tirelessly for the Dragons applying tackles and looking inside 50.

Alice O’Loughlin (Oakleigh Chargers) – 18 disposals, 3 marks, 1 inside 50, 3 goals
Her timing and speed off the mark caught the eye inside 50, making the most of her opportunities in front of goal. She used the space around her well to find the football and took advantage of the loose ball inside 50 to capitalise with three majors.

Alyssa Bannan (Northern Knights) – 11 disposals, 4 marks, 1 tackle, 2 inside 50s, 5 goals
Kicked a round-high five goals and looks a good candidate for one of the top goalkickers this season, taking a number of good grabs with her vertical leap and athleticism the highlight. It was clear that defenders cannot allow Bannan to get goalside or she will create something out of nothing with a couple of clever snaps close to goal adding to her tally on the day.

Poppy Schaap (Geelong Falcons) – 24 disposals, 3 marks, 6 tackles, 4 inside 50s, 1 goal
Started forward and roamed up the ground to be the third highest disposal winner with her ability to lay some strong tackles and show a high work rate. She just pushes time and time again across four quarters, and was rewarded with a goal, while setting up a number of teammates with scoring opportunities.

Matilda Van Berkel (Gippsland Power) – 15 disposals, 6 marks, 4 tackles, 3 inside 50s, 2 rebounds, 28 hitouts
The standout Gippsland Power player in the loss to Geelong Falcons, Van Berkel had to step up to play ruck and was ultra-impressive with a round-high 28 hitouts, as well as finding plenty of the football around the ground with strength overhead and an ability to cover the ground well with hard running.

Brooke Hards (Bendigo Pioneers) – 18 disposals, 4 marks, 7 tackles, 4 inside 50s, 2 rebounds
The Pioneers’ co-captain picked up where she left off last season, being a shining light in her side’s loss to the Jets. Hards was constantly getting involved either offensively or defensively, and was fierce around the stoppages. She had a team-high 18 touches and as she has become known for, laid a truckload of tackles in the process.

Laura Gardiner (Geelong Falcons) – 38 disposals, 1 mark, 14 tackles, 5 inside 50s, 1 rebound, 1 goal
Our Draft Central Player of the Week for Round 1, Gardiner was simply unstoppable with a ridiculous 38 touches and 14 tackles, pumping the ball in time and time again, and helping free up her teammates around the ground. She ran at a 50 per cent balance between kicks and handballs, and while most of her touches were often in possession chains, her work rate showed just how much she works around the ground.

Jess Fitzgerald (Northern Knights) – 15 disposals, 1 mark, 2 tackles, 4 inside 50s, 3 rebounds
Last year’s best-on in the grand final started her 2020 year with a strong performance, moving well around the ground and showing off her speed in close and precision kicking. She possesses good footy IQ and was one of the best Knights on the day during their win over the Cannons.

Eliza James (Oakleigh Chargers) – 18 disposals, 4 marks, 5 tackles, 7 inside 50s, 1 goal
Showed clean hands and vision by propelling the ball inside 50 and finding targets in there with a massive seven inside 50s. She also provided plenty of defensive pressure with strong tackling and forcing errors from the Bushrangers, working well through the midfield to drive the ball in transition.

Olivia Meagher (Eastern Ranges) – 16 disposals, 2 marks, 4 tackles, 4 inside 50s, 2 rebounds
It was not a great day for Eastern, but Meagher never gave in as she battled and bruised her way through four quarters for her side. She showed great leadership and tried to will her side on, laying crunching tackles and bumps, often bouncing straight up or off opponents with a hungry desire to win the ball. Meagher also tried getting the ball down the field to set up scoring opportunities and was a standout for her team.

Ellie McKenzie (Northern Knights) – 12 disposals, 4 marks, 3 tackles, 4 inside 50s
Another player who had a great impact that stats might suggest, McKenzie kept battling on the inside and then going forward with her strength and power a highlight during Round 1. She adds a great dimension to the Knights’ midfield and she was able to win the ball in tight, extract it and get the ball out, going on a couple of short runs to try and break down the opposition defensive structures.

Shanara Notman (Gippsland Power) – 11 disposals, 3 marks, 2 tackles, 1 inside 50, 5 rebounds, 2 hitouts
The Gippsland Power overager showed why she was a terrific choice to come back as a 19-year-old player this year, standing tall in the face of a wave of Falcons attacks, with great strength in the air and ability to move the ball out of defence. She sold a bit of candy in the process and was rock solid back there in defeat.

Georgie Prespakis (Calder Cannons) – 19 disposals, 1 mark, 3 tackles, 3 inside 50s, 3 rebounds
The highly-touted prospect had a solid game to start the season, not often getting too much free space, but still finding her fair share of the ball through the midfield. She was thrown around into different positions but still had an impact, and her work rate between the arcs was really impressive.

Alice Burke (Sandringham Dragons) – 15 disposals, 2 marks, 3 tackles, 3 rebounds
The potential St Kilda father-daughter selection stood up in big moments and makes the trio of most unlucky to miss players after a solid performance. She can play just about anywhere and is able to break up the play with her ability to find space and short kick to teammates on angles to disrupt the opposition’s zones.

Amelia James (Oakleigh Chargers) – 19 disposals, 1 tackle, 3 inside 50s, 6 hitouts, 2 goals
We could have included a heap of Oakleigh Chargers and James was the next one in line after an impressive two-goal performance inside 50. She is in her top-age year and showed she can pinch-hit in the ruck as well.

Amelia Velardo (Western Jets) – 16 disposals, 3 inside 50s, 1 rebound, 4 hitouts
An eye-catching player across the ground and new into the team, Velardo showed some good athleticism coming out of the ruck at times and had a really busy start to the game in Western’s win against Bendigo. She was able to drive the ball forward and be amongst it in close, often firing out quick handballs to teammates in space.

DRAFT CENTRAL’S NAB LEAGUE GIRLS TEAM OF THE WEEK: ROUND 1

It was a really even round of performances this weekend, with a number of players making the shortlist for the team but just missing out. Among them were Calder Cannons’ duo Tamsin Crook and Emelia Yassir, Sandringham Dragons’ duo Winnie Laing and Pia Staltari, GWV Rebels’ duo Renee Saulitis and Lilli Condon, Northern Knights’ Ash Snow, Geelong Falcons’ Elizabeth Dowling, Bendigo Pioneers’ Jemma Finning, Eastern Ranges’ Jorja Livingston and Dandenong Stingrays’ Georgia Grimmer.