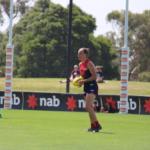 TWO round down and the two conference ladders are already starting to show an alarming trend, with all Conference A sides ahead of every Conference B side. In the match of the round, the Western Bulldogs travel to Tasmania to face North Melbourne, while winless sides, GWS GIANTS and Carlton face-off with one team to finally score four points. In the other matches, Collingwood travels west to face Fremantle, Adelaide hosts Geelong, and Brisbane take on Melbourne in a unique round that sees all five games played interstate.

After a thumping win in Round 1, North Melbourne head back to the Apple Isle, this time to the University of Tasmania Stadium. While their opponents this time around will be much tougher in the reigning premiers, the Kangaroos will fancy themselves having seen off GWS GIANTS in torrential rain and thunderstorms, a week earlier. The Western Bulldogs will also fancy their chances and are likely the best side to topple the team of champions, which should see plenty of eyes glued to televisions tonight. The winner seems almost destined to secure a finals spot, given their respective opponent will arguably be the toughest opponent they come across, and will go 3-0 up with four rounds remaining. Western Bulldogs have one of the most potent forward lines in the league and that is how they can exploit the Kangaroos. If the Roos, led by former Dog Emma Kearney, can win the midfield battle, then it will go a long way to victory. The North forward line is ultra-impressive and has no trouble kicking goals, but the Bulldogs have a stern defence that will not give them an inch. It all adds up to being an absolute blockbuster with Kearney and Ellie Blackburn going head-to-head.

If a week is a long time in football, then a year is an eternity, with Carlton’s last victory coming in the Round 2 clash, last year. Carlton has made a habit of upsetting GIANTS fans, winning both of its matches against the GIANTS since the AFL Women’s began. Their contested brand of football tends to work well against the GIANTS and they restrict the run of GWS, however the GIANTS have ensured bigger bodies in the midfield this season. The teams almost match up identically across the board statistically, with Carlton’s tackling inside 50 a highlight – averaging 11 per game. The GWS midfield will be hard to combat, but if the Blues can get the ball forward, they are a huge chance of an upset. The winner gets back on track this season, while the loser will find it tough to recover, needing to win at least three games from its last four games to secure a finals spot. No doubt the match-up to keep an eye on is Madison Prespakis against Alyce Parker with both young guns unbelievably talented, strong and can go forward and have an impact. A head-to-head we will see plenty over the next decade.

Carlton gave their fans some serious hope in the Round 2 clash between the sides when a inaccurate Blues team got the job done at Drummoyne Oval. The win was the club’s first victory outside Ikon Park, and with the Blues holding the GIANTS to just three behinds after quarter time, the defensive work was terrific. Captain, Brianna Davey had 16 disposals, two marks, six tackles and two rebounds, while Jess Hosking and Shae Audley shared 28 disposals and 10 clearances between them. But the biggest memory was that of Sarah Hosking who smashed the tackle record with 16 to go with 12 disposals. For the GIANTS, Alicia Eva had 17 disposals and a game nine tackles, while Amanda Farrugia and Courtney Gum both finished with 16 touches.

In one of the first three cross-conference games, Fremantle hosts Collingwood at Fremantle Oval. The sides have been relatively even over the first two seasons, which is to say a little underwhelming overall. This year the teams have taken different paths, with the Dockers winning their opening two games, while the Magpies have suffered two defeats. Collingwood almost toppled Geelong in Round 1 and the Dockers almost fell to Melbourne, so the teams were very close to both being 1-1. With Sophie Alexander returning to the Pies side to strengthen them up forward, and Nicole Hildebrand named in defence; the latter will assist the in-form Ash Brazill in creating run out of defence. For Fremantle, Dana Hooker and Kara Donnellan have been dominant through the middle, and with an electric forward line, it will be hard for the Magpies to combat. If Fremantle win, they will move to second in Conference A with the other two undefeated sides facing off the day before. A Collingwood loss means the Magpies go 0-3 for the third consecutive year, almost ruling out finals before the midway point of the season.

In front of a home crowd at Optus Stadium, Fremantle recorded an important 13-point win after having won just the one game in Western Australia the year before. Dana Hooker starred for the Dockers, racking up 20 disposals, two marks, five clearances, six inside 50s, six tackles and finishing off with two goals in a clear best on ground performance. Lara Filocamo and Lisa Webb both recorded 17 disposals, while Melissa Caulfield also booted two goals, from 12 disposals. Christina Bernardi was the key goalkicker for the Magpies with two majors, while Melissa Kuys had a game-high 21 touches.

After escaping with a win last week, Adelaide will be keen to make it two on the trot and keep in touch with the top three in Conference A. The Crows were unlucky not to win against the Dogs at the ground in Round 1, while the Cats also suffered a defeat at the hands of the reigning premiers, last week. A win for Geelong will give them breathing space inside the top two in Conference B, while a Crows loss will make it tough given the relative strength of the Conference, and require them to win against the remainder of their Conference rivals. Chelsea Randall is a massive inclusion for the Crows to strengthen a defence which conceded seven goals to Carlton last week. Geelong captain, Mel Hickey, and the exciting Richelle Cranston return for the Cats in what makes for an entertaining battle around the ground. Expect both teams to bring the heat with everything on the line, especially for the home side.

In the final game of the round, top of Conference B hosts the bottom of Conference A with both teams even for the season with one win and one loss. The Lions will be keen to maintain top spot in their Conference, while the Demons can ill-afford to drop further behind given the strength of Conference A. A win for the Demons could see them leap-frog a couple of teams and keep in touch with the leaders. Last week both teams had different contests, with Brisbane going down in a high-scoring thriller in the west, while the Demons got their hands dirty against Collingwood in a low-scoring affair to earn the four points. Elise O’Dea was sensational in the win with 26 touches and a drought-breaking second quarter goal, while Ally Anderson recorded 26 disposals, four marks and a goal in the win, to be the highest disposal winner for season 2019 so far, with 48 disposals. The Demons are a contested based team that can clunk strong marks around the ground, while Brisbane are good at controlling the play around the ground, which spells for an entertaining contest when both teams clash.

Melbourne survived a scare in their clash with Brisbane last season with both sides keen to keep on top of their finals hopes. The Demons held the Lions scoreless in the first term, and led by 14 points at the final break, before Brisbane booted two of the last three goals to almost seemingly take the points under lights at Casey Fields. Karen Paxman had 25 disposals, while Daisy Pearce was dominant with 24 disposals, five clearances, four inside 50s and two goals. Elise O’Dea was equally as busy with 23 touches as the experienced trio ensured the Dees came away with the four points. Kate Lutkins was enormous in defence, racking up a massive nine rebounds as well as a game-high 26 possessions, while taking four marks and having three inside 50s as well. Sabrina Frederick-Traub was important up forward with three majors from 15 disposals and three marks.