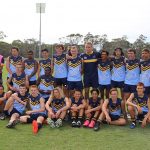 FIFTY talented footballers with Indigenous or multicultural heritages will represent the 2018 Flying Boomerangs and World Team squads in two exhibition matches at the 2018 National AFL Under 16 Championships on the Gold Coast in July.

Selected by AFL club recruiters following the 2018 AFL National Male Diversity Championships held in Blacktown, the respective squads of 25 young men has been chosen based on school attendance, leadership skills, and football ability.

The AFL Flying Boomerangs program is a personal development and leadership program for Aboriginal and Torres Strait Islander young men aged 14-16 years old, supported by Rio Tinto. Meanwhile the World Team is made up of the best upcoming AFL multicultural players from across the nation.

AFL General Manger Game Development, Andrew Dillon, said the Rio Tinto AFL Flying Boomerangs and World Team programs are a great opportunity for the best rising Aboriginal and Torres Strait Islander and Multicultural talent in the nation to develop on and off the field.

“The Boomerangs and World Team squads have been selected following their impressive performances at the 2018 AFL National Diversity Championships in Blacktown last week,” he said. “These are more than just programs, we are now preparing the next generation of young leaders and footballers with the skills, qualities, and experiences to become positive role models amongst their own families and within their broader communities. “Over the past few years we have seen the Diversity Championships grow into a genuine elite talent pathway and we look forward to witnessing the next stage of development for these players, coaches, and umpires.”

In the 2018 National Diversity Championships, Victoria was triumphant in the All Nations competition with a one-point thrilling victory over Tasmania in the final, while Western Australia took out the Kickstart title with a strong 12-point victory over South Australia.