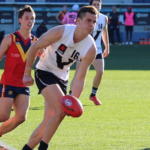 AFTER an improved second half of the season under new coach David Teague, Carlton headed into the AFL Draft confident of finding a quality player at Pick 9. Instead, the Blues made a couple of clubs earn their Academy stars in Stephen Silvagni‘s last year at the desk, and then opted to trade down their selection to grab a slider and a bolter, as well as a much-improved midfielder. In the Pre-Season and Rookie drafts, the Blues grabbed their man from the Gold Coast SUNS, as well as two players with immense upside and X-factor.

If you are a Carlton fan you have to be happy with the haul achieved at the 2019 National AFL Draft. With Eddie Betts coming into the side – joined by Jack Martin in the Pre-Season Draft – the Blues somewhat moved past missing out on Tom Papley. It was clear they wanted to grab some more inside depth to assist Patrick Cripps in the midfield, as well as some firepower up forward to roam around the feet of Charlie Curnow and Harry McKay, as well as roam up the ground and open up the space for those forwards.

If that was the goal, then Carlton ticked that box with the five 18-year-olds walking into the club. Brodie Kemp was touted as a top 10 pick before going down with an anterior cruciate ligament (ACL) injury, and the fact he was there for the picking at selection 17 was madness. While he will not be able to run around in the navy blue next year, if he can get a couple of games in the reserves late in the season, it will give Blues fans a taste of what they can expect in 2021. Sam Philp was the other player taken on night one and he provides not only inside ball-winning ability, but also elite speed. With a 2.87-second 20m sprint, Philp is lightning around the stoppages and adds a different element to the midfield. He might have been seen as a bolter for a player who did not play Under-18 Championships, but his second half of the season, and indeed after the first month of NAB League was deserving of the first round selection. All-in-all, Carlton fans might have been annoyed to miss out on potentially picking up Sam Flanders, but landed terrific value with their picks and two players who offer that point of difference in the midfield.

With the Blues’ only other National Draft selection, Carlton picked up another late bloomer with Calder Cannons’ Sam Ramsay a hard working runner on the inside. He started the season with indifferent form as a winger, but once he went into the guts, excelled averaging 31 touches per game over a seven-game purple patch. His form earned him a share in the Calder Cannons’ best and fairest award, as well as a spot on an AFL list.

But the bargains did not stop there. While Martin was always predicted to land at the Blues on a heavily front-ended contract, the former SUNS long wait to land at Ikon Park was finally over to add extra class in the front half of the ground. Also joining him there in the forward half were rookies, Josh Honey and Fraser Phillips. Both have tremendous upside, with Phillips in particular touted as having a lot of development left in him. Honey can spend time in the midfield and is super athletic with an eye for goals, while Phillips predominantly players inside 50 as a medium forward who can do magical things, but could eventually develop into a midfielder.

Overall, Carlton fans should be really pleased with what their club has been able to do at the drafts, picking up genuine bargains and players with upside and high ceilings that while they do not always work out, if they do then this draft haul could be lauded in the future.